Fine dining with my infant

I was sick of eating mediocre food because I had a baby. But would our culinary adventure ruin everyone else's? 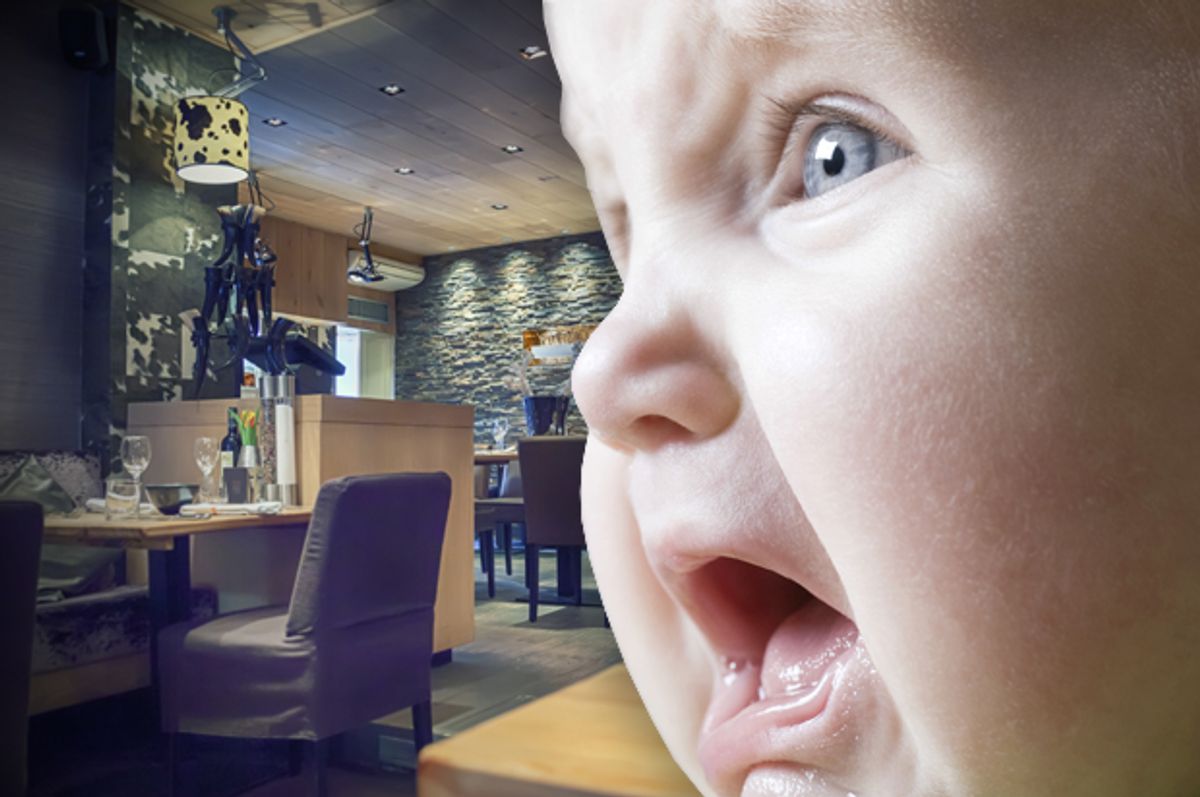 I wheeled my infant daughter, Harper, down Frith Street in London’s Soho District to the Michelin-star-rated Arbutus.

Mommy was in the city on business; we were just along for the ride. She wouldn’t be back at the hotel until later that evening, after stuffing herself on exceptional gastronomy paid for with the company card. But I refused to sit in another restaurant that publicized their family-friendly atmosphere, the equivalent of a sparkling wine vineyard choosing the slogan “We are cheaper than champagne.” I was tired of paying for crap food just because I had a baby.

Back in the United States, when I had attempted to secure reservations at fancy restaurants, I had received many hard-line replies from anti-infant restaurant managers. (They also were, apparently, anti-grammar. “Like I tell everyone whom is planning to bring infants to the restaurant thee are very welcome as long as it doesn’t disturb any of the other guests where many of them are enjoying a night out away from there own Children,” one of the managers wrote — sic, sic, and sic.) But being in a new country meant new opportunity. As a foodie, and a father with 16 hours in a day to fill — I figured it was worth a try.

Harper and I had a five o’clock reservation in the hopes of disturbing as few patrons as possible. I pushed open Arbutus’s door at 4:58, entering the brightly lit, white-walled space, with its black-and-white still photos, modern art and beech wood tables. Even Harper, who took a second glance around, seemed to note that we were out of our element.

In the weeks prior to our arrival in London, Harper had developed some bad habits. She started licking the seat backs of highchairs, forcing bowel movements that timed perfectly with the arrival of a dish and faking a choking incident.

“Is she OK?” other diners would ask as my eight-month-old produced sounds that would normally warrant the Heimlich maneuver.

Arbutus had no highchairs, and Harper’s grabby little fingers kept going for the silverware, so she sat beside me on the bench, my leg locking her firmly to the back cushion. Worry one was now supplanted by the fear of watching my daughter turn herself into a projectile the moment I lowered my guard. On top of that, I had bowel movements — hers — and fake choking — also hers — to contend with.

A pair of waitresses, having no other diners to attend to, made faces at Harper.

“I love babies,” the younger waitress said, placing her hands on her thighs and leaning in to establish rapport with my infant. “It’s not like I want a baby,” she clarified. “They’re nice for a little while. Can I hold her?”

I handed her off. Harper indulged the young lady’s desire to bop with her for a few moments and then tired of the waitress, who also was nice for a little while.

When my starter arrived — a crisp pig’s head made from cheek, chin, nose and ear meat, cooked in red wine and pressed into a taurine — Harper started to shriek. This, just as the pre-theater crowd arrived, was a new and unexpected development.

This infant opera wasn’t marked with discomfort or annoyance. She had just discovered that her inchoate pipes were capable of creating a quick falsetto screech. Harper yelped every few seconds like a smoke detector with failing batteries.

Feed her, I realized. But I had a fork in one hand, a shrieking baby under one leg and her food on the other side of the table, somewhere in a bag in the undercarriage of her stroller. I needed to act fast.

The pig’s head, while probably a bad choice for a baby — though it was organic — came with potato puree topped with shreds of pistachio and toasted buckwheat. What had the pediatrician said about nuts again? They were either bad for babies because they were a choking food or they were bad for babies because they were just bad for babies. Harper screamed like a royalist spotting Prince George’s emerald-rimmed pram. We received a few stares. I jabbed my finger into the potatoes and then into her mouth. The shrieking continued.

I knew enough about babies to suspect that if it wasn’t one end of the alimentary canal that needed attention, it was probably the other. We went downstairs for a fresh diaper.

In the men’s room, the only suitable place to change her was in the space between the two sinks, beneath hanging bottles of L’Occitane hand soap, where the nozzles aimed down at her forehead. Her legs hung off the counter. But Harper was relaxed.

It took ten minutes to calm her. During that time, I searched for a garbage pail. Arbutus’s restroom had no trash bin for Harper’s soiled diaper. I checked the hallway and then the bathroom again. This receptacle did not exist. Meanwhile, my daughter’s siren cry reduced itself to a whimper, until patron number two entered the restroom, hit the goddamn hand dryer, and kept me beside the urinals with a distraught infant for the better part of an hour.

I totally forgot about the diaper, remembering it at the top of the stairs when I spotted the waiter carrying steak tartar. I tried to be discreet about the thing — “Where can I throw this out?” I said, flashing the diaper like some illicit bundle. But the waiter didn’t seem to understand. So I raised the diaper slightly. He looked horrified. The manager, however, noticed the precarious package and rushed over with a garbage bag.

Harper continued to clutch me like a devastated baby monkey. When we returned to the table, I found my next course: saddle of rabbit served with its liver and kidneys and wrapped in ham. I picked up the fork touched it to the meat, but made no progress. I made the same futile movements with the knife; then I tried the fork again.

Either the manager was a good man or needed to get rid of me immediately. “Would you like me to ...?” he asked, pointing to my rabbit, but not wanting to complete the sentence.

“Sure,” I said and watched as the manager cut my rabbit for me. (I managed to feed myself.)

The next day, Harper and I lunched at Novikov’s. Their bright Italian restaurant felt like a market on the Amalfi Coast. Everyone was well dressed; Harper and I were stained from her banana breakfast. But Novikov’s owned a highchair, letting me know that our kind had been anticipated (at least in the planning stages of the restaurant).

When my seafood antipasti arrived, I speared at bits of squid and potato, sardines and roasted red peppers. Harper craned her neck to study the contents of my plate. I figured that I could feed her salmon, but I didn’t have her rubber spoon accessible. I looked around like someone who hadn’t paid for the all-you-can-eat menu, and siphoned food into Harper’s mouth. She made the sounds of flatulence with her lips, spraying bits of salmon onto the table.

We made it to the main entrée — a succulent lamb cooked under a sheet of clay that the waiter had to crack open like a piggy bank — when my daughter needed a new diaper.

He reached into a compartment behind the hostess stand, pulled out a key, and led me into the restroom corridor. The key was for a door labeled family toilet. The room was pristine; I could have changed Harper on the floor beside — yes — the diaper bin.

We were back at the table for dessert when another family had entered Novikov’s. The mother nodded at me, though it looked more like a question, as if she were an abettor constantly in need of affirmation; the father appeared nervous the way a moral person might present if they were knowingly infecting an entire restaurant with whooping cough. Within minutes of sitting, his youngest daughter, who was old enough to have established decent hand-eye-coordination, shattered a plate. Everyone turned to glare. Harper and I exited before any eyes rolled toward us.

“She’s beautiful,” the manager told me before I could reach the door. “You did a great job.”

Despite our visits to Arbutus and Novikov’s, I had one realm left to conquer. I wanted to see if Harper could keep white tablecloths clean. Were we that good?

The following day, we headed southwest from Buckingham Palace to Quilon, a Southwestern Indian restaurant. The dining room was dark and decorous. The patrons were men in suits, who looked as though they put in late hours at work to avoid the kids that littered their homes. Harper shook the owls and hawks above her stroller, creating a cacophony of unnatural bells stuffed inside her pink predators.

Slightly intimidated, I chose a seat at the back corner of the restaurant. The tablecloths were immaculate and white.

Though Quilon had a highchair, Harper refused it and demanded to join me on the bench. I threw up my leg without hesitation. When the appetizer arrived — a wonderful lentil-crusted tilapia, one that attracted my infant’s attention — again my movements were fluid: I sucked off the fish’s spiced crust, fed Harper the flesh, and licked my fingers proudly.

“Maybe I can bring you some rice for her,” our waiter said with concern.

She wanted no rice, just fish and the head of her rubber cow toy, which, in retrospect, may have been our greatest faux pas at this Indian restaurant.

When the chopped lamb with ginger and curry leaves arrived, I was so lost in the flavors that I missed her gentle face plant onto the bench. But that dive forward introduced her to the softness of velvet and, later on, as I sipped espresso and devoured bebinca — a half-cooked layering of thick crepes, coconut shreds, and chocolate sauce — Harper busied herself with rubbing her face against the velvet bench, sneaking in a few licks of fabric for good measure.

I looked at all of the fine diners seated before their spotless white tablecloths and then back at my daughter. It had only been a few days ago that I worried about judgement. But we had gone from ear sores at Arbutus to inconspicuous at Quilon. I realized that the years would pass and I'd probably forget about the intricacies of these exquisite dishes. I would have difficulty recalling the slight chagrin that I had felt on that first night out in London. But I'd always remember and cherish the opportunity to have gone fine dining with my infant daughter, who, in 48 hours, seemed to transform into a little lady.

I took my final bite of bebinca and watched Harper's smile vanish. Her face reddened and she started to grunt, initiating the process of filling her diaper. I smiled. Almost, Harper, I thought. I stood up to ready my changing kit and banged into the table, tipping over the ramekin of mint and coriander chutney upon the white tablecloth.

Noah Lederman writes the travel blog Somewhere Or Bust. He is completing a memoir about his year-long trip around the world with his first baby, a surfboard. You can follow him on Twitter @SomewhereOrBust