The worst journalists in comics: How The Daily Bugle became a parody of Fox News 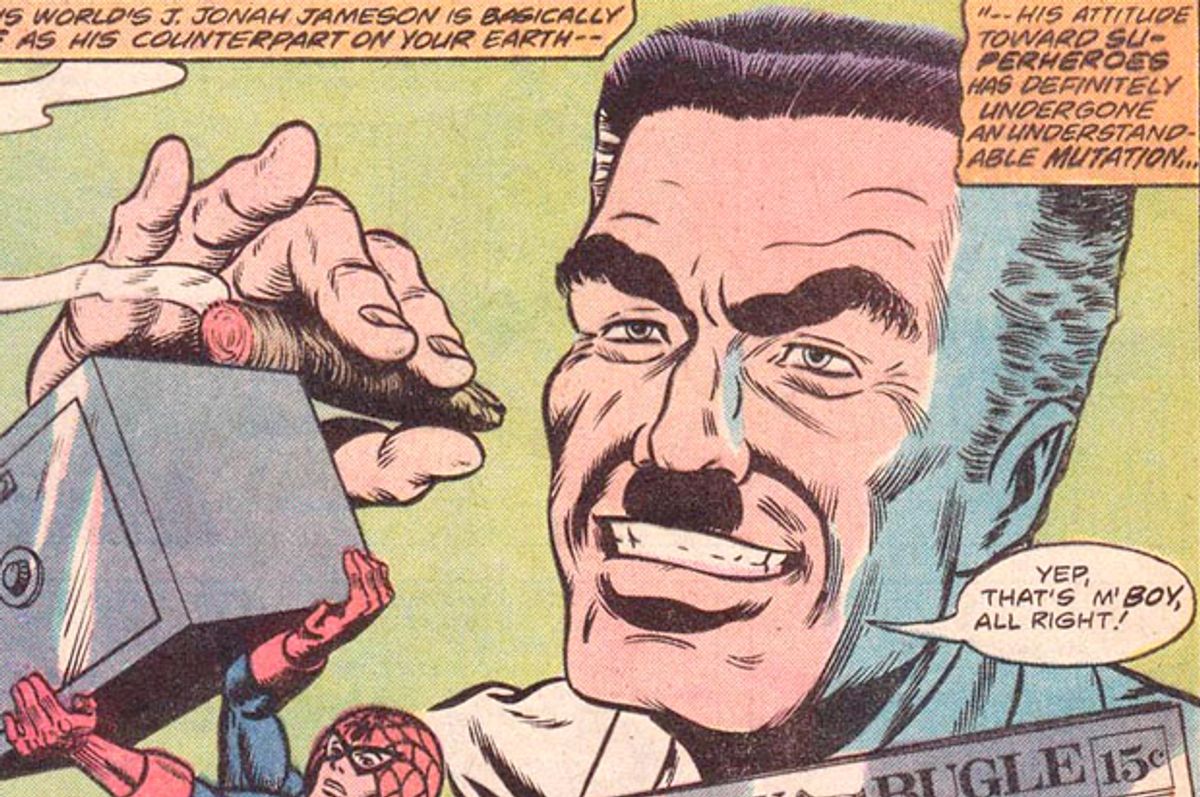 Journalists get a bad rap—and we often deserve it. We miss the big stories. We focus on the dumb stories, like George Clooney’s wedding or the bazillionth article about millennials or selfies. We engage in clickbait that’s indistinguishable from the brilliant Clickhole. Some of our most reprehensible colleagues plagiarize and lie. As a whole, we kind of suck.

The failings of real-life journalists are mirrored in the larger-than-life worlds of comics, where the headlines tend to be more cosmic and spandex-clad. While some of the better comics journalists—like photographer Phil Sheldon of the classic “Marvels”—are likely surrogates for comic book writers, others are crappy, creepy and ethically challenged. Welcome to Bad Journalism 101.

As my friend and fellow comics dweeb Mike observed, “Parker’s journalistic ethics are horrible if he made a name for himself by staging pics of himself.” That’s exactly how Peter Parker paid the bills in the early Spider-Man comics, taking posed pictures of Spider-Man that no one else could get, then selling them to J. Jonah Jameson, the Daily Bugle’s editor-in-chief. I’m not aware of any stories where Parker distinguishes himself as a journalist, so he goes in the Bad column. With great power does not come great journalism ethics.

Brian Michael Bendis and Michael Avon Oeming’s creator-owned series “Powers” is about a lot more than how cops investigate superhero deaths; it’s about how the media sensationalizes those deaths, much like our own morbid, celebrity-obsessed, clickbaity media. “Powers” uses many characters and storylines to comment on the media, including the magazine “P! Online,” and writer Colette McDaniels (author of “Who Killed Retro Girl?”). But the main vehicle for Bendis’ media satire is Ted Henry, host of “The Powers That Be,” a tabloid news show that is crass and exploitative on a good day. However, just like our own tabloid journalists, sometimes Henry actually does some good journalism, like when he interviewed Detective Christian Walker about a government cover-up. Hey, even TMZ uncovers an important story once in a while.

These two tabloid reporters (in the wonderful world of “Saga”) are hot on the trail of Alana and Marko, the lovestruck couple from warring races whose child Hazel threatens to upset the galaxy’s applecart. Babygate, anyone? Upsher and Doff are actually pretty decent reporters most of the time, but they end up getting scared off the story by a bounty hunter named The Brand. Rather than kill the pesky reporters, The Brand allows them to live “Because the only journalists that deserve death are sports writers.” That appears to be true in all galaxies.

As longtime editor-in-chief of the Daily Bugle, Jameson is pretty much the patron saint of bad journalism in comic books. Far more obsessed with selling papers and attacking Spider-Man than exposing the truth, Jameson is as sleazy as it gets, and he’s often shown ranting at the good journalists around him, like Robbie Robertson. However, Jameson isn’t as purely evil as his Hitler mustache would indicate. He occasionally shows a shred of integrity, like in the classic Daredevil story “Born Again.” In this Frank Miller-penned tale, Jameson lectures one of the best journalists in comics, Ben Urich, who has been roughed up by the Kingpin’s thugs: “There are things you just don’t let happen in this racket. Number one is you never get scared away from a story. Not while you’ve got the most powerful weapon in the world at your side. This is five million readers’ worth of power. It can depose mayors. It can destroy presidents. And it’s been due to get aimed at the Kingpin for years now. But it needs you to do it.” Pretty inspiring stuff from a guy who later became a parody of Fox News and an evil version of Iron Man.

In John Layton and Rob Guillory’s brilliant, batty series “Chew,” many characters have bizarre superpowers, including Amelia Mintz, a food writer for the Mercury Sun. Amelia is a saboscrivner, meaning she has the power to write about food “so accurately, so vividly and with such precision—people get the actual sensation of taste when reading about the meals she writes about.” In some ways, that makes her the best journalist ever, but the FDA doesn’t agree when her reviews of terrible restaurants cause a barfing epidemic.

Dean Haspiel and Mark Waid created one of the most fun, colorful, and old-fashioned (in a good way) series in recent memory with “The Fox” and the story “Freak Magnet.” The Fox is one of Archie’s old, obscure superheroes, dating from 1940. Right in the boilerplate description of our hero is a recipe for bad journalism: “Paul Patton was a photo-journalist who couldn’t seem to find the story. So Paul donned the costume of the Fox to make the story come to him. Now the story won’t stop.” I wouldn’t say Patton’s is a terrible journalist, but his superhero antics take up so much of his time that the poor guy barely has time to photograph his lunch, much less the news. Fortunately, Patton’s journalistic neglect is more than made up for by colorful, giddy art and a uniquely fun vibe. I’m looking forward to this character returning as part of Archie’s Dark Circle line.

Modeled, like Doonesbury’s Uncle Duke, on Hunter S. Thompson, Jerusalem acts as a lone voice for truth in the dystopian future of “Transmetroplitan,” written by Warren Ellis and illustrated by Darick Robertson. Though Jerusalem is generally kind of awesome, he goes in the Bad category for various violations, including wire-tapping sources and even abusing them with his trusty Bowel Disruptor, a gun that lives up to its gross name. As cathartic as Jerusalem’s adventures are, I doubt the finest journalism schools teach what he calls “monstering,” which is “...the art of abusing people. Of ambushing them with questions, following them with questions, hounding them with questions, driving them to their fucking graves with questions. It’s sort of like being a photographer, except we’ve never yet killed any royalty doing it. Yet. Good things come to those who wait.”

Monstering and Bowel Disrupting aside, Jerusalem has a pretty good handle on the purpose and limitations of journalism. I felt like cheering when the bald weirdo said, “I can’t solve any problems. All I can do is try to make sure people can’t avoid noticing them.” Amen.