USA Discounters, vowing to change how it pursues military debtors, will now be known as USA Living 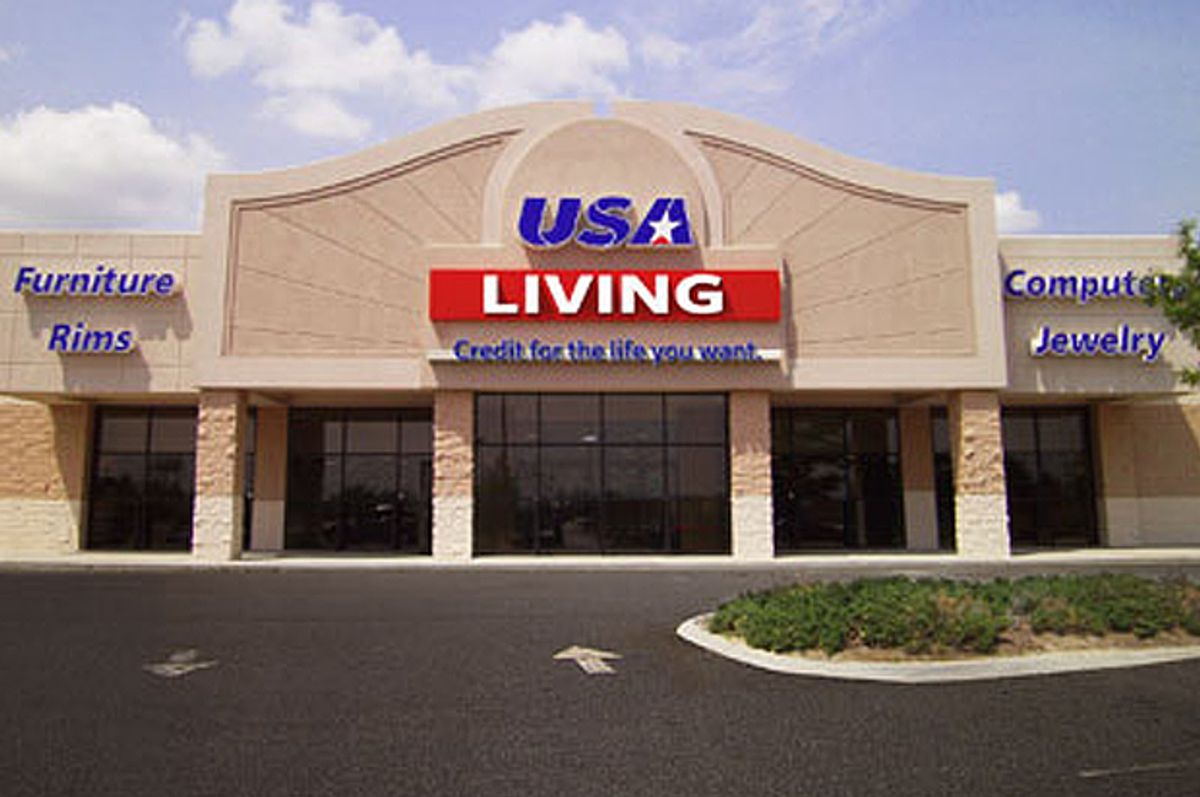 USA Discounters, promising to change how it pursues military debtors, will now be known as USA Living

USA Discounters has undergone a makeover.

The Virginia-based retailer was the focus of a ProPublica investigation in July into its lending practices to service members. The company still sells high-priced furniture, electronics and appliances outside military bases across the country, but it has adopted a new name for its stores, USA Living, and says it has made reforms to its collections processes.

As before, USA Living advertises that active military customers, regardless of their financial histories, are "always approved" for credit. But it has traded in the USA Discounters' tagline, "Your incredible credit store," for a new USA Living tagline, "Credit for the life you want."

Hannah Arnold, a company spokeswoman, said the name change was made to avoid confusion. "[T]he company is not a discount store," she wrote in an email.

Despite the name change, USA Living continues to make loans much the same way it did as USA Discounters.

ProPublica's story, published with the Washington Post, detailed how USA Discounters has filed thousands of lawsuits in two local Virginia courts against borrowers who defaulted on their loans. Relying on a clause in its contracts, the company filed suits in those courts regardless of where service members bought the items or where they were based. Because the service members frequently didn't show up in court, the company easily obtained judgments and could garnish the debtors' wages.  Department of Defense payroll data obtained by ProPublica showed that USA Discounters seizes the pay of more active-duty service members than any company in the country.

USA Discounters will still be filing lawsuits in those local courts, but said in a press release that it will take a number of steps to inform borrowers they have an option to be sued closer to home. The company said it only files suit after borrowers fall several months behind and as a last resort.

Service members who take out loans from USA Living are now provided with a "Notification of Jurisdiction and Customer Rights." The notice reiterates that the company has the right under the contract to sue the borrower in Virginia, but adds that if that does happen, the borrower can request to have the suit moved to another court and the company "will honor that request." Borrowers are required to sign the notice as acknowledgement.

Arnold, the company spokeswoman, said that if borrowers do fall behind, they will again be notified that they have the option to transfer any lawsuit to a local court.

Carolyn Carter, director of advocacy at the National Consumer Law Center, said the changes were an improvement, but not by much. "They're still planning to sue consumers in Virginia even though most consumers have no contact or connection with Virginia," she said. They have made a bad practice "a little less bad," she said, by giving borrowers the option to have a suit transferred.

The company's makeover does not seem to have slowed the pace of its lawsuits in local Virginia courts. In the last two weeks, for example, the company filed 28 lawsuits in Virginia Beach General District Court. Only one of the defendants had a Virginia address. The others all had addresses either on or near military installations around the country, including Fort Hood and Fort Bliss in Texas, Fort Benning and Fort Gordon in Georgia, Fort Bragg in North Carolina, Fort Carson in Colorado and Fort Campbell in Kentucky.

It is illegal under federal law for debt collectors to sue consumers in a remote court no matter how many disclosures are provided. But the Fair Debt Collection Practices Act does not apply to a lender like USA Discounters filing suit on its own behalf. After ProPublica's story ran, a group of senators sent letters to two different federal regulators asking them to close that loophole and investigate USA Discounters' practices.

The Federal Trade Commission's response to one of those letters confirmed the existence of the loophole in the debt collection act, but hinted that USA Discounters might be in violation of a different federal law.

Under the FTC Act, the FTC has the power to combat "unfair or deceptive acts or practices" by a wide array of companies, FTC Chairwoman Edith Ramirez wrote in a letter to Sen. Richard Blumenthal, D-Conn., one of the six senators who wrote the commission. Ramirez cited a case where the FTC found that it was, in fact, unfair for a company to sue borrowers in a remote court.

In that case, the FTC took action against a company that offered online payday loans through a company located on a tribal reservation in South Dakota. Much like USA Discounters, the company's contracts declared that consumers could be sued in the local tribal court, regardless of where they lived. The FTC brought suit against the company, charging that the practice violated the law. The FTC, however, has not, as of yet, taken any action against USA Discounters.

The Consumer Financial Protection Bureau announced a settlement with USA Discounters in August over unrelated issues. The settlement, which centered on a $5 fee that the company charged service members in its contracts, did not preclude further action by the CFPB. A spokesman said that the agency, which also has broad power to combat unfair business practices, had not yet replied to the senators' letter, but "remains focused on protecting our nation's servicemembers in the financial marketplace."