Why Hong Kong police are "celebrating" the attacks on protesters 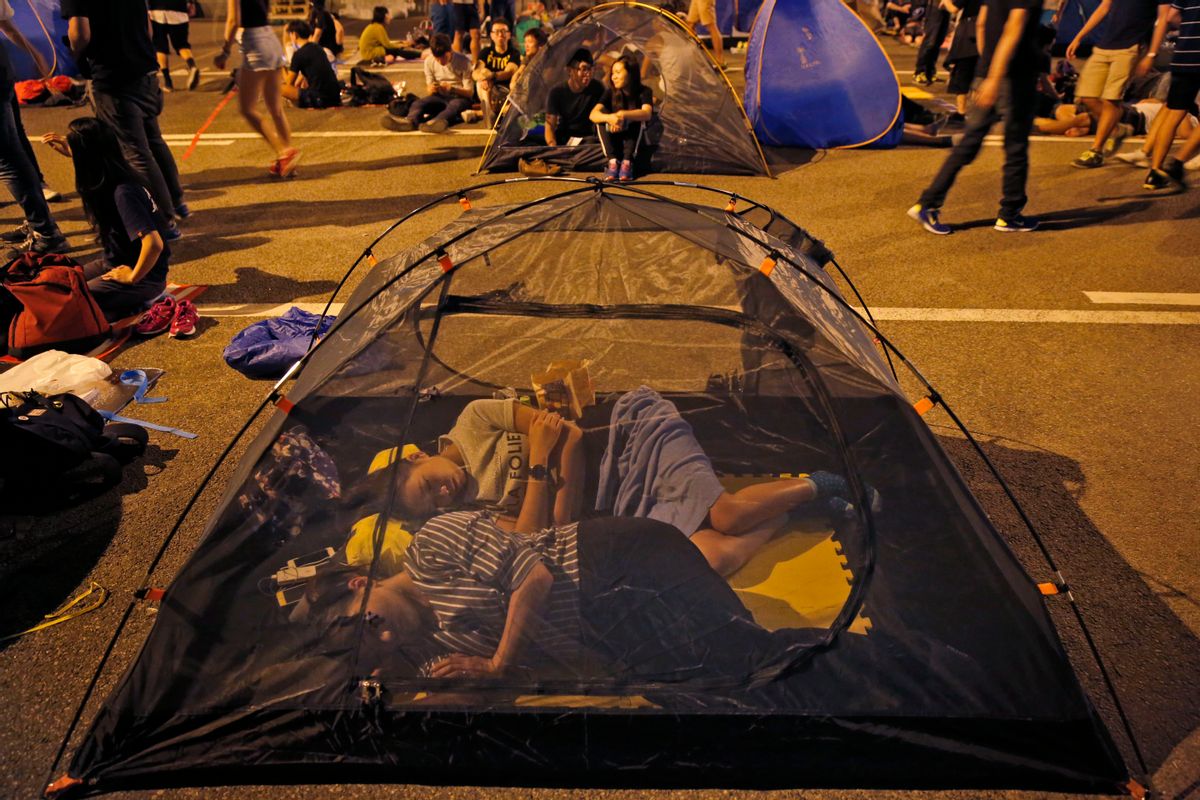 HONG KONG — Thousands of protesters are enraged at the police for allegedly allowing them to be attacked last night by a mob in the commercial district of Mong Kok.

And though they won't say it publicly, Hong Kong's police are furious with the protesters in turn.

A police officer with years of experience tells GlobalPost that when the news came in that student protesters were being attacked Friday by disgruntled citizens — some of the them with gang ties — police officers were "cheering."

"They were celebrating," said the police officer, who requested to remain anonymous. "Everyone was watching the news. They were cheering, saying [the protesters] deserved it."

Why? The officer cited anger over long hours during the course of the seven-day protest, and a widespread sense that demonstrators had violated the dignity of the profession by blocking police vehicles and demanding to search them for weapons.

"They hate the protesters," the officer said.

On the streets in Mong Kok on Saturday, the police were present in greater numbers than the day before, when tensions ran highest. Still, when scuffles broke out in sections of the crowd, protesters felt it was necessary to chant, "Arrest Him!" or "Shame on police!" to gain the authorities' attention.

Though the atmosphere was calmer on Saturday, anger and suspicion were still running hot. Throughout the day Hong Kong residents shared videos from the Friday melée that allegedly showed anti-occupy activists groping women or committing violence, and then being released by police without arrest.

Others lamented that one of the victims of Friday's attacks, who was taken bloodied to the hospital, was arrested for disturbing public order after his treatment, while his alleged attackers walked free.

The police, for their part, issued a statement in response to rumors that they were deliberately allowing gang members to beat and bloody students in order to clear the occupied areas. The police confirmed that eight of 19 people arrested in violence on Friday had triad connections.

"Police acted swiftly," said Lai Tung-Kwok, secretary of security for the police, in the statement. "The Police officers at the scene tried their best to handle the situation under chaotic conditions and to maintain order in an impartial way. I note that some people have claimed that the government allowed triads or even worked with triads. These allegations are totally untrue, unfounded and beyond belief."

Despite this reassurance, many protesters feel betrayed. On Saturday, students strengthened their barricades in Mong Kok, reclaiming areas they'd been evicted from the day before.

One man, Kelvin Pang, was witnessed by GlobalPost running from a crowd that had just erupted in shouts to police officers 20 yards away. He screamed "Police, police!" and told them that people were shouting that men in the crowd were carrying weapons. Police responded by asking Pang to show his ID and to describe the weapons.

"They didn't go directly to solve the problem. They asked whether I would be the one to report this case and go to the station. It is foreseeable that there is conflict, but the police do nothing. … They think protesters are making trouble, they have been here five days, this is understandable. But they should be enforcing the law."

A nearby student, Kennedy Lee, pointed to a crowd where people were shouting for help to stop a fight. "You can see the police are selecting to do things. I don't think they are politically independent now."

Peter Yu, one of the students present at the Friday skirmishes complained that "every time they arrested someone, it was a victim, not a suspect."

The unrest in Hong Kong may face a quick resolution this weekend as embattled Chief Executive CY Leung stated in a press conference Saturday that protesters should clear all roads and government buildings by the end of the weekend.

But restoring the trust of protesters like Oscar Peng, a young worker wearing a bandanna around his neck, could take much, much longer.

"In 30 years I've never seen people attack each other in broad daylight and grope girls. That's why people are back on the street. … We used to take our security for granted. After last night, I don't know what to say. They have lost our confidence."