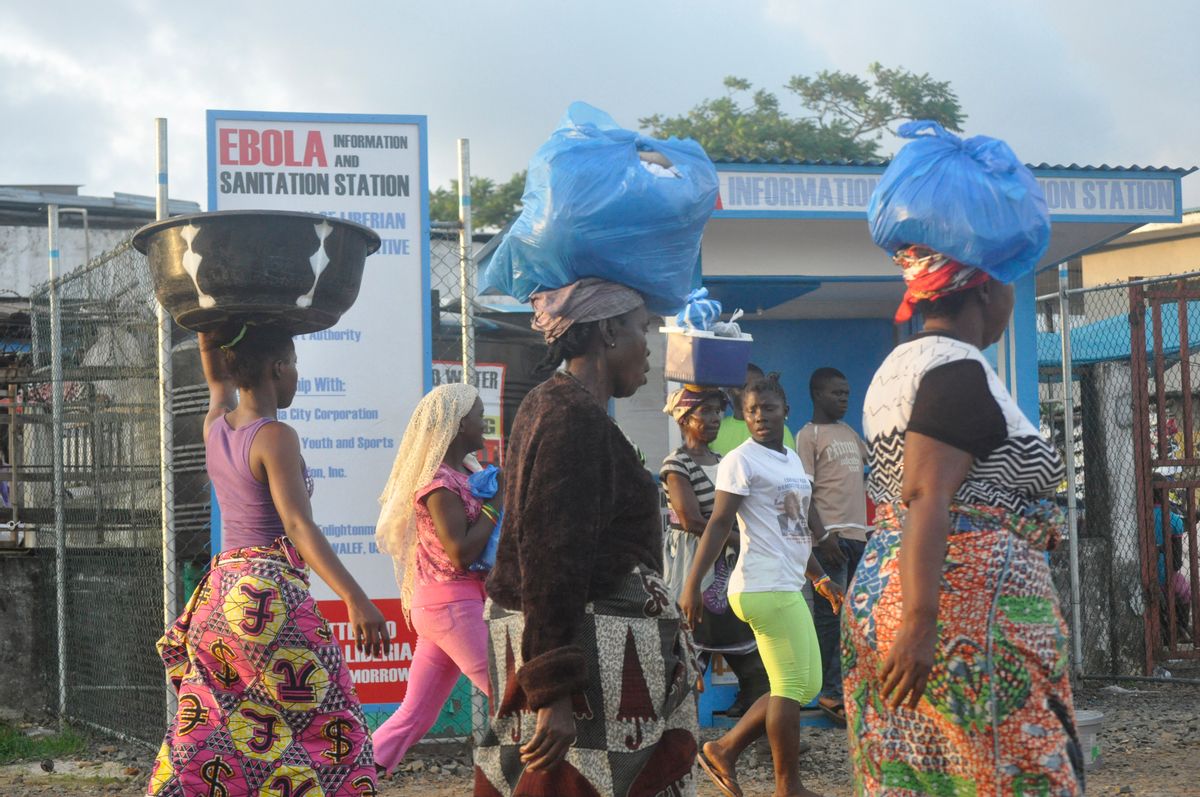 Liberia women walk past a sign warning people of the deadly Ebola virus in Monrovia, Liberia. Friday, Oct. 10, 2014. The number of people killed in the Ebola outbreak has risen above 4,000, according to the World Health Organization. (AP Photo/ Abbas Dulleh) (AP)
--

MONROVIA, Liberia (AP) — Liberian officials are pleading with nurses and physician assistants to show up to work Monday amid a dispute over hazard pay that has prompted calls for a strike in the middle of the Ebola epidemic.

A strike could deliver a serious blow to the fight against Ebola in Liberia, where the World Health Organization has recorded more than 2,300 confirmed, suspected and probable deaths from the deadly disease — more than any other country.

"Everybody is appealing because it has adverse and very negative consequences on people suffering from Ebola and progress that has been made with the fight," Nyenswah said.

Members of the National Health Workers Association are demanding $700 in monthly hazard pay on top of monthly salaries that are generally around $200 or $300. Monthly hazard pay is currently less than $500.

The association boasts more than 10,000 members, though the health ministry says only about 1,000 of those are employed at sites receiving Ebola patients.

George Williams, the association's secretary-general, said he was waiting for the government to address their specific demands.

"Up to this point nobody has come to us to resolve them, so the strike action stands for Monday," he said. "Our doors are still open to negotiation and we are waiting."

He accused the government of rushing to license nursing students to replace striking professionals.

"They are planning to hire people to take our places. Because of that they don't want to engage us," he said.

More than 4,000 people have died in the ongoing Ebola epidemic, according to World Health Organization figures published Friday.

The disease is spread via the bodily fluids of infected patients, leaving health workers especially vulnerable. More than 400 health workers have contracted the disease — about half of them in Liberia, where personal protective equipment is scarce. Both Liberia and Sierra Leone have recorded 95 health worker deaths.

When the first Ebola cases were confirmed in Guinea back in March, Liberia agreed to pay $700 per month in hazard pay because there were only two treatment centers and far fewer health workers involved, Nyenswah said.

As the epidemic and efforts to contain it expanded, however, that commitment placed a "huge financial burden on the state," he said.

The government then lowered the monthly hazard allowance to $435 per month. By comparison, doctors receive at least $825 in monthly hazard pay, and their salaries are more than double most other health workers, Nyenswah said.

Ordinary Liberians expressed alarm on Sunday at the prospect of a strike, saying it could cripple the campaign against Ebola just as the international community ramped up assistance. Over 300 U.S. troops are currently on the ground in Liberia, and U.S. officials say up to 4,000 could ultimately be deployed to increase the number of treatment units and available beds.

Georgia Moulton, principal of the Ronald Reagan Institute, a day-care and elementary school in the Monrovia suburb of Bardnersville, asked the government to negotiate with health workers to keep them on the job.

"If they leave work, we will go on the rampage as patients also start to leave," she said.

Pentecostal preacher Kortu Brown, vice president of the Liberian Council of Churches, asked leaders "to pray and work together" to resolve the impasse.

"To put it simply, (a strike) will be a blow and it is something that we should avoid," he said.

In Sierra Leone, the country that has recorded the second highest number of Ebola deaths, a road accident involving eight Ebola patients being transferred for treatment highlighted the logistical hurdles in providing care.

The vehicle transporting the patients tipped over on a rough dirt road between Mongera village and the city of Bo, located more than 200 kilometers southeast of the capital, district medical officer Dr. Alhaji Sayru Turay said Saturday.

No one was killed, though at least one patient was in critical condition after finally reaching their destination in Kailahun, in the east, he said.

Like Liberia, Sierra Leone is woefully short of available beds. As of Oct. 8, the country had 304 of an estimated 1,148 beds needed, according to the WHO.

On a tour of the country Saturday, Magdy Martinez-Soliman, assistant secretary-general of the United Nations Development Program, reiterated calls for more support from international donors to fight Ebola.

"It is imperative that we step up our efforts, scaling up the response to help Sierra Leone fight the disease," he said.