My husband won't sleep with me

After 15 years together, the rest of my life is stretching out before me, a desert devoid of passion or lust 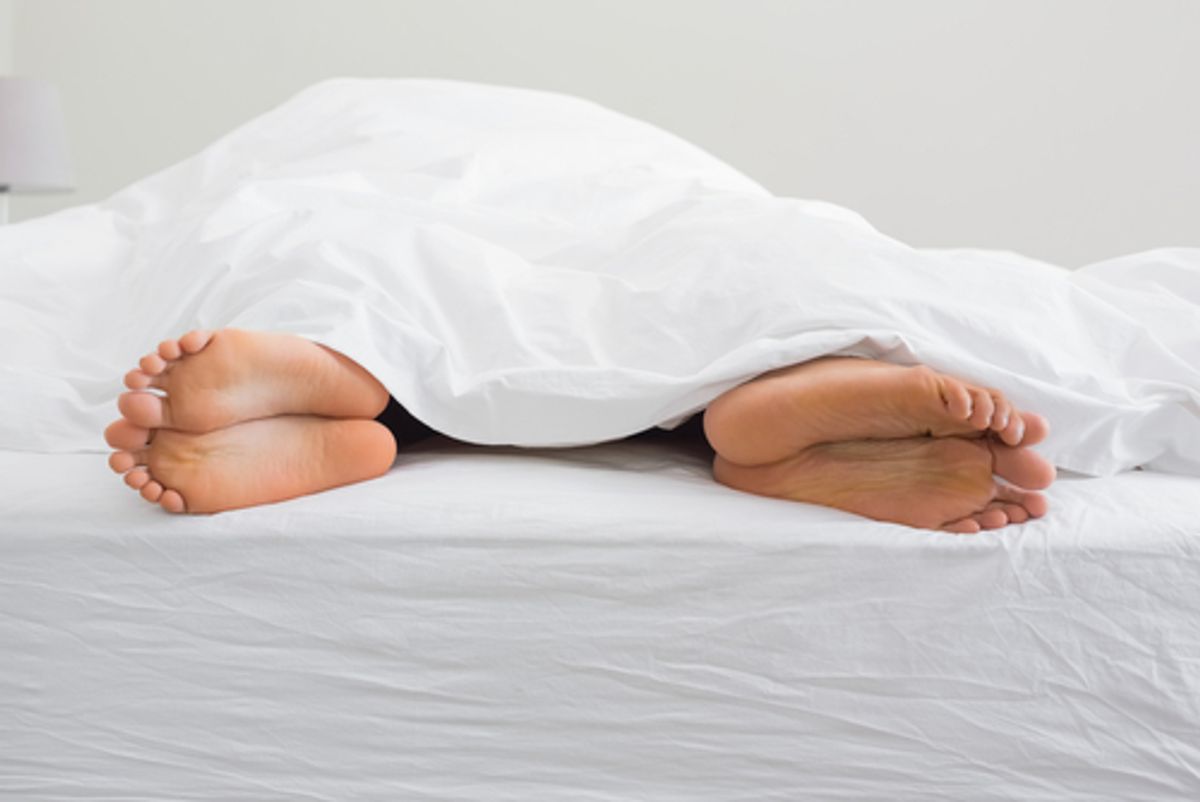 I hooked up with the bartender one night. And then I married him.

And my husband, boyishly cute, tall, lanky, is a gentle, passive, and wildly intelligent man. He mixes a mean martini and loves me more than anyone has ever loved me.

The problem is: He won’t kiss me. He won’t spontaneously touch me—not a hug or an arm on my shoulders. He rarely, if ever, sleeps in our bed. And for the last five years, we have lived in a “sexless marriage.”

More from DAME: "Where the Sick Go to Become Well"

It’s not that either of us lost our looks. I am pretty and sexy in a non-intimidating, disheveled kind of way. I am emotional and physical: I love hard. I work and play hard. I feel things deeply and intensely. When we first got together, he worked in a bar and I had a “grown-up” job we loved having a good time. We consumed a lot of booze, cooked meals together, and listened to live music as often as possible. I was six months out of an abusive relationship and wanted to feel safe while enjoying a man’s company. No commitments necessary. And we had good sex—it was often slow and delicious.

But it wasn’t frequent. He was 27 when we got together, and had only been with a couple of women. My sexual experience was more, ahem, varied, and I was an enthusiastic teacher. The attraction, at first, was mostly physical: Here was this super-cute guy who was nice to me and happened to be a dynamo in bed. He was easy to surprise or seduce, although he needed a good 24 hours to recharge before getting it up again, during which he completely shied away from me. Back then, as now, I tried to explain to him that “intimacy” includes an entire spectrum of activities that fall between sleeping separately and having loud, acrobatic sex. But my first mistake was assuming this could be taught. Or that it would come along later. We always had love and deep caring. What we never had was passion. I thought love and passion were different things: In my past life I had hot, often violent romances with more men than I cared to count. We connected sexually and drove each other crazy with desire … but I didn’t want to start a family with any of them. I thought this was better.

We were together nearly three years, with no signs of moving toward marriage. He still wanted to party every night; I was 30, and wanted to start living a more adult life, so I broke up with him, only to discover I was pregnant with our first child. He was supportive and couldn’t wait to be a dad. He doted on me but did not touch me except to feel the baby kick. During the second trimester, I was out of my mind with hormones. I wanted to eat, play, and have sex. He refused me every time—and drank. I maintained my physical appearance and kept up our life as best I could. His alcohol consumption increased; I begged him within weeks of my due date to slow down, that I needed him to be conscious. After the baby was born, I was anxious to feel somewhat normal and looked forward to his touch. He was afraid to hurt me and wanted to let me sleep. We stumbled through parenthood and eventually married when our oldest daughter was 2. This, I thought, would make it better. Marriage, legitimacy. Maybe he acted like a bachelor because he was one; maybe he felt guilty getting crazy with me when I wasn’t his wife.

Over the years he continued to pull away from me. Our honeymoon was spent in Mexico, drowning in tequila. We had sex twice. I have a drawer full of honeymoon lingerie that I never wore because he wasn’t interested. My subsequent pregnancies were a fluke, happening on the first try. He followed the pattern of the previous pregnancy: bringing home ice cream, drinking more, and avoiding my touch. When our youngest was born, he was so drunk that he passed out in the delivery room. I labored alone and it was nearly impossible to wake him up when the baby was ready to arrive.

I wanted to do better, fix the marriage. I thought that if I fit the traditional role of “wife,” focusing all of my energies on our family, he would come back to me and see me as a sexual being again. That doesn’t make sense, does it? I changed my job multiple times to find a better schedule and tried to tone down my creative personality. I searched out other families with whom we could become friends. We moved into a bigger house in a family-friendly neighborhood, started making more money, and I eventually quit working altogether. This year I found myself immersed in our home and family because this was what we wanted, this is what we had worked for. It was supposed to make everything all better, but I spiraled downward, lonelier and bitter. He still didn’t want me. I failed.

I used to wake him up with kisses, teasing, boldly climbing on top of him and having my way. He responded by laying still, his eyes closed, sometimes with his fingertips on my hips, waiting for me to have an orgasm so he could go back to sleep. The one-sided nature quickly felt dirty and wrong. What kind of asshole was I, taking sex from him when he didn’t want it, just so I could get off? I come on to him at night, wearing pretty nightclothes that aren’t overtly sexy because blatant sexuality scares him. I stay up late with him, flutter my eyelashes and place a hand on his thigh or suck lightly on his earlobe. He stares blankly at me, swigs his beer, and turns on the television.

Then there are nights when he drinks just enough to find me irresistible. My husband of 15 years becomes a sloppy teenager, purely focused on penetration until he loses his erection, or passing out cold after he wakes me up. Those mornings-after I often awake to the delight of him having pissed the bed and am further humiliated when I have to wait for him to wake up, closer to noon, before I can wash the sheets.

When he initiates while relatively sober—once every 4 or 5 months—he doesn’t touch me with fingers or tongue to make sure I’m ready for him. He doesn’t force me; I accommodate his lack of finesse because I miss intimate touch so much and, truth be told, I am very easily turned on. He doesn’t make a sound if he climaxes and is embarrassed by my vocals. Afterwards, he catches his breath and retreats to the bathroom to shower while I am left filled with shame—I’m his wife, why does he want to wash me away so quickly?

I find myself mentally tracking our intimate contact based on football games and holidays and the position of the moon. My friends bitch about the frequency with which their husbands want sex; I tolerate the conversation as long as I can before lashing out at them, telling them to take it when they can get it. One woman asked me over mojitos one night, caring and curious, what it feels like to be denied passion all of the time. I didn’t have to think about the answer: It defeats and crushes me; I feel embarrassed and deeply sad.

More from DAME: "I Am More Than OK with Not 'Having It All'"

Sometimes I miss the simple pleasure of kissing more than sex. I crave lips and fingers and tongue. I love having a man’s hands in my hair or his arms wrapped around me so tightly I can’t breathe, his eyes open, studying my face, watching me, wanting me, overcome by having to make the decision of which part of me he wants to kiss next … Ohhh, who am I kidding? I miss the sex, too. No appliance, and no matter how talented and familiar my own hands, nothing compares to connecting with another person on a purely sensual level. Stimulation and orgasm aside, I miss warmth and trust and reading someone’s reactions to my touch, making it up as we go along. I miss waking up sticky and sore and aroused, tasting the other person on my lips, the scent of him on my skin, and doing it all over again. I miss loud, crazy, Cirque du Soleil–worthy sex acts that leave me gasping and incapable of speech and quiet, spontaneous quickies, clothes rumpled and shifted, messed-up hair, followed by giggles. I love being desired and seduced and—at my core—I am unashamed of expressing my wants and feelings. Sex makes me happy and creative. Spontaneity drives me wild. When the situation allows, my enthusiasm creates a force to be reckoned with.

The rest of my life is stretching out before me and all I can see is a desert, devoid of lust. By now I’m afraid I’ve had too many lonely nights to overthink and overanalyze. I’m paralyzed with self-doubt and am irreparably terrified of rejection. How would I explain to the world that I left my marriage because I wasn’t getting any? I’ve finally discovered the sexual woman that I want to be—and GOD is she a lot of fun!—but I am forced to hide it because my husband simply doesn’t want me. I kick myself every time I become wistful and romantic, hoping this time—whenever that may be—will be different.