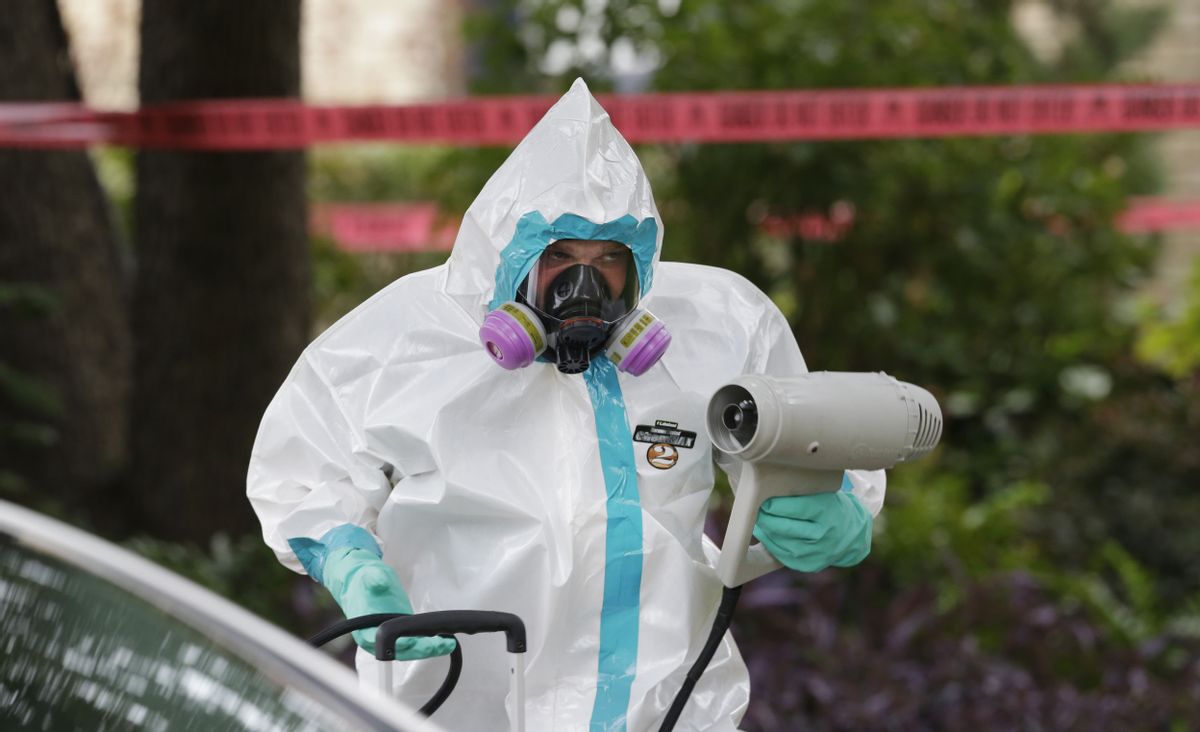 A hazmat worker cleans outside the apartment building of a hospital worker, Sunday, Oct. 12, 2014, in Dallas. The Texas health care worker, who was in full protective gear when they provided hospital care for Ebola patient Thomas Eric Duncan, who later died, has tested positive for the virus and is in stable condition, health officials said Sunday. (AP Photo/LM Otero) (AP)
--

1. WHAT LED TO EBOLA INFECTION IN DALLAS HOSPITAL WORKER

A "breach of protocol" at the hospital where an Ebola victim was treated before his death resulted in the infection of a health care worker, health officials say.

2. 'EITHER KOBANI WILL FALL AND I WILL DIE, OR WE WILL WIN'

That's how Dalil Boras, one of the Kurdish defenders of the northern Syrian town, explains the predicament of his group in the face of heavy firepower from Islamic State militants.

The ruling against the state's first-in-the-nation ban on same-sex unions is the latest court decision in a busy week for the issue across the country.

4. HOW MUCH DONORS PLEDGE FOR GAZA RECONSTRUCTION

The U.S., Qatar and other key participants at an international conference promise $2.7 billion to rebuild the war-ravaged Gaza Strip.

The arrests were the only incidents in an otherwise peaceful weekend of protests over the fatal shooting of 18-year-old Michael Brown in Ferguson, Mo., in August.

7. WHO FACES SENTENCING IN GIRLFRIEND'S DEATH

Olympic runner Oscar Pistorius could receive up to 15 years in prison in the killing of Reeva Steenkamp.

8. AS LEAVES FALL, PA AMBUSH SUSPECT COULD BE EXPOSED

A month after the shooting of two Pa. state troopers, searchers hope autumn weather and thinner tree cover will help them find Eric Frein, the main focus of the manhunt.

Three-term Kansas GOP Sen. Pat Roberts is fending off a challenge from independent Greg Orman, and fears about terrorism and Ebola have eclipsed voter concerns with Obamacare.

A half-century after Martin Luther King Jr. received the Nobel Prize, "I don't think his vision has ever been more relevant," says Paul Chappell, a West Point graduate who served in Iraq and now teaches and writes books about peace.