We all grieve differently. My way happens to include inappropriate humor, flirty texts and a fake Buzzfeed listicle 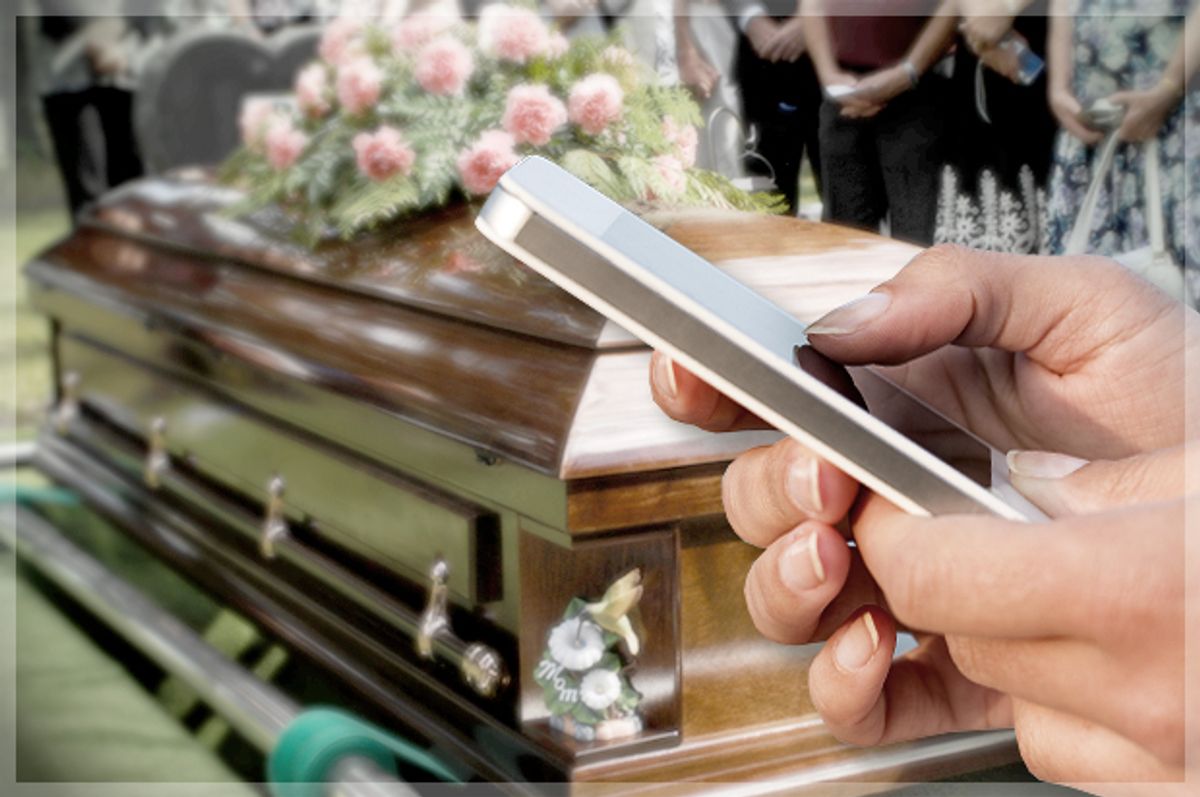 I’m at a shoe store. Maybe Nine West. I could check the shoe box, but reading seems hard. Harder than choosing a pair for my father’s funeral. That’s easy: just avoid buying anything I actually want; for example, the four inch purple heels, pink puff of feathers like a dollop of frosting on the toes. I text a picture to the guy I hope is my boyfriend.

“All set to strip at my dad’s funeral,” I write.

I have been dating a guy I’ll call Timothy for maybe three months, which if you ask me is kind of early to introduce a dead parent into the mix. My dad couldn’t have put a pin in this whole “myocardial infarction” business? Just until Timothy and I became exclusive? Obviously someone in this scenario is acutely self-centered. Wait, why are you pointing at me?

Look, my dad wasn’t your dad. And by you, I mean the American Public. My dad wasn’t a fishing dad or a hunting dad or a golf dad or a barbecue dad. He didn’t collect rare coins or line up to buy the latest Apple product. When it came to gift giving, I couldn’t grab a silk tie and a card with a lighthouse on it. (Why lighthouses? Does Hallmark think all dads crave the freedom of open water or need a gentle, subliminal reminder they still have penises?)

Last Father’s Day, I think I bought “Bob Dylan: Behind the Shades Revisited,” and an empty MTM 380/9MM 100 Round Flip-Top Ammo Box I found on Ebay. The first? An attempt at creativity, but of course he already owned two copies. The second? Per my mom’s instructions; apparently he collected them. My father’s interests were fevered and specific. Over time, he’d turned most hobbies into income streams. A poet, musician, archivist for Harley Davidson and professor of English and Rock and Roll History, he was a minor celebrity in Milwaukee. I guess I want you to understand all this so you know right off his life was different. Maybe that way you won’t find fault with how I handle his death.

I’ll tell you this: I start crying the moment we find him. Curled on his side, he looks carved from granite. Remember this. Remember I cry. When the police arrive, along with my mom’s friends and mine and my sister and some chaplain no one remembers ordering, my mother sits, stoic. She answers the policeman’s questions like she’s taking a phone survey.

“They’re going to think you killed him,” I say, making the chaplain laugh, then cough, then dab at his lips.

You’re thinking I’m afraid to be earnest. That like some hipster caricature I examine life from a careful distance, cynicism my defense. Not true. If anything, I stand too close to my feelings, so close that sometimes I can’t see beyond. But the depth of this loss is unprecedented, too complex to immediately mourn. My crying comes in doses. Time release. Small packets of grief discharged over hours and weeks and days.

The day after my father dies, a friend suggests I make a memory book.

“With photos and anecdotes,” she says. I know she means well.

I mean: For me, writing is work, not therapy. Plus scrapbooking makes me want to find a tall building to leap from or a skewer to stick in my eye.

I say: “If by ‘peace’ you mean Jessica Simpson’s new calf muscles, then I’m in,” which is also what I mean.

They both look at me like I’m a stranger asleep on the sidewalk. Someone who warrants pity, but caution, too.

In the week before my dad’s funeral, Timothy and I talk on the phone each night. In person, we’ve mostly had sex. We discuss weird shit like fractals and George Carlin, but on the eve of the funeral, I read him an email from my father.

“Artists are not delusional.  Artists are not unstable.  But artists — of your caliber — seek a narrative in life’s ways that only exist on the page, on canvas or set to music.  You have chosen a difficult pathway. If you need anything, just ask; if you want solace, I’m here; if you are feeling confused, so am I most of the time.”

Reading, my voice breaks in a way that feels performative. I’m better at laughter than tears. Timothy says I was lucky to have a father who understood. Then we go back to joking about me approaching my eulogy like a one-woman-show.

“Good thing my dad died so I could get some attention.” I blow my nose.

It’s normal to shelve emotions to focus on funeral arrangements. The service has outgrown the funeral parlor, so the university provides a hall. The day of the funeral, after wrangling speakers, I’m staring into the bathroom mirror, trying to find myself behind my eyes.  My phone buzzes with an inspirational aphorism from a friend.

“Unable are the loved to die. For love is immortality.”

He means well, of course, but the message feels hollow. Generic. What does Emily Dickinson know anyway? She spent the last years of her life talking to visitors through her closed bedroom door. She never had to pitch an editor. Most of her work wasn’t even published till after she died.

Once my dad said he wanted his ashes fired from a revolver. Someone, maybe my sister, remembers, so we decide in summer we’ll launch him into the sky. My sister and I will get our own bullets, also packed with ashes, a keepsake both meaningful and macabre.

Winter melts to spring and my mom keeps referring to the event as “the shooting,” problematic in public, like when she hollers across Walgreens, “don’t forget sunscreen for the shooting.”

“Find a different name for what’s happening,” I tell her, "before we’re all detained by the feds.”

The week prior to what we come to call The Bullet Ceremony, I’m writing about it for a Live Lit event.  Timothy will perform a funny piece, but my story sags under its subject’s weight.

“Mine’s a crowd pleaser,” Timothy says. We’re on his couch, editing. “I’ll get a standing ovation, while you’re up there with your sad dad bullshit.”

I know Timothy is joking, mainly because he thinks everything he writes sucks, but we stare at each other, both wondering if he’s gone too far. I laugh first and when he joins me it’s like in yoga when everyone hits the same buzzing tone on the “om.” We laugh hard because it’s funny; we laugh harder, because it shouldn’t be.

I try to tell another friend about the experience, its strange catharsis. She throws me a look marrying sympathy and condescension. She means well, but I think: Don’t tell me how to grieve.

Meanwhile Timothy and I have stopped dating even though I love him, because if there’s anything losing my dad taught me it’s you don’t get to have what you want. We’re close, though, in a way less about hugging and sharing and growing, more about silent understanding: regret isn’t always meant to be expressed.

“I’m considering self-immolation.” This is me texting Timothy. Just after the ceremony, I’ve pitched a piece about his death to an online magazine.

“Maybe a shooting spree. I have a bullet.”

The ceremony fucking gutted me. I had nothing funny to say, and if I couldn’t comment, how could I cope?

“I don’t think you can just throw it at people. That’s not effective,” Timothy replies.

IPhone ellipses to indicate he’s typing. Longer than usual. Normally we compete to see who’s fastest with a one-liner.

When I don’t respond, Timothy adds: “But not in a creepy, incest way.”

It’s not like I’m about to make a memory book, but I do cry during yoga. It’s hot yoga, so no one notices. I’ve been writing about my father all day, that’s probably why.

Walking home, I think about how, as a writer, I’ve chosen to monetize my emotions. Psychological subterfuge. A convenient trick; my work forces me to sit with my feelings. I may not be Emily Dickinson, but I’m using my own words to grapple with grief.

Right then, Timothy calls from Barnes and Noble.

“I won’t get out of here without dropping a Benjamin,” he says. “Gotta buy a Father’s Day present for my dad and step-dad. Plus the day after Father’s Day is my dad’s birthday...”

“You’re saving money as we speak.”

“I should pitch a Buzzfeed listicle: Top One Way to Save Money This Father’s Day: Dead Dad.”

On the sidewalk beside me, an older woman inhales loudly, a cartoonish rebuke directed at me. I knew what she’s thinking: I’m callous, sealed off from emotion by irony’s slammed door. But through the phone I hear Timothy laugh like you do when you want to cry for someone you care about. We both know I mean well.

Sarah Terez Rosenblum teaches at The University of Chicago Graham School and freelances for publications and sites including The Chicago Sun Times, XOJane, afterellen.com, Curve Magazine and Pop Matters. Her 2012 debut novel, "Herself When She's Missing,” was called “poetic and heartrending" by Booklist.