Bill Maher and Sam Harris' proof is wrong: Their argument is based on an untrustworthy poll

Maher, Harris back their Islam arguments up with a Pew Research poll, but those respondents couldn't answer freely 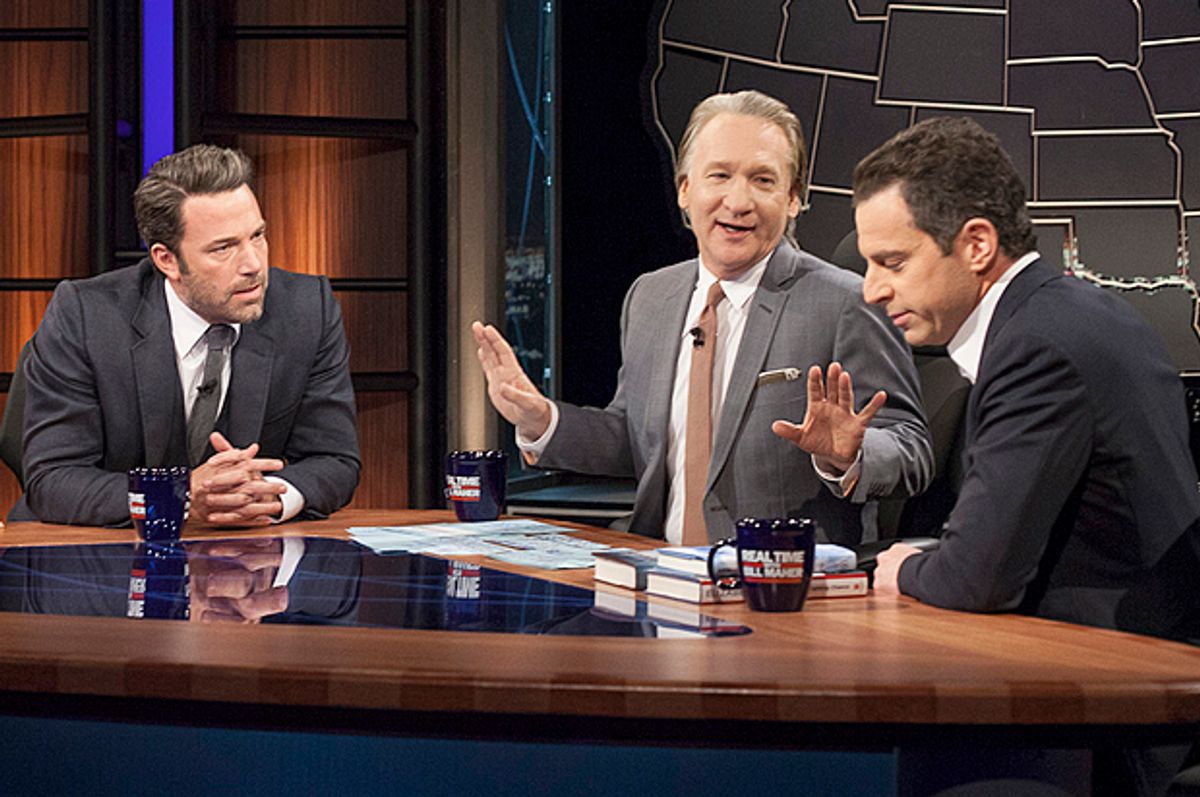 A recent TV showdown between talk show host Bill Maher, author Sam Harris, comedian Ben Affleck and columnist Nicholas Kristof has spurred a tsunami of passionate reactions. At stake, one central question: is it OK to criticize Islam as a religion that inspires intolerant violence to its followers? Maher and Harris have no problem saying it is. Affleck and Kristof vehemently disagree, with the former angrily dismissing the notion as “gross and racist.” The latters’ argument is that bloodthirsty jihadists are only a tiny minority who should not be conflated with Muslims, the overwhelming majority of whom reject violently intolerant behaviors. Kristof later went on to call off abusive generalizations in a Muslim world made of “vast and varied multitudes.”

As an Arab citizen who lived most of his life in the said Muslim world, and spent his journalistic career trying to make sense of its unending complexities, I can only agree that generalizing never helps. The thing is, unlike what their adversaries claim, that is not what Maher and Harris did. They did flatly condemn Islam as a “bad idea”—and even the “mother lode of bad ideas,” as Harris put it—but that was not a generalization. It was, rather, the legitimate expression of an opinion they are entitled to. How surprising is it that outspoken atheist activists condemn religion? Both made a point in that criticizing any given faith does not amount to condemning its followers, which is true. However, Maher and Harris also affirmed that intolerance in the Muslim world is way more than the fringe phenomenon their co-panelists say it is. That was not meant as a judgment, but rather as a statement of fact. As Harris further elaborated, there is “abundant evidence that vast numbers of Muslims believe dangerous things about infidels, apostasy, blasphemy, jihad, and martyrdom.”

The “abundant evidence” in question—which popped up in many previous debates on the same topic—comes mainly from one source: a 2013 wide-ranging Pew Research Center survey examining religion-based beliefs and attitudes in 39 countries. Maher mentioned one of its findings, according to which 90 percent of Egyptians believe that “death is the appropriate response to leaving Islam.”

(That number is actually incorrect. The Pew poll rather indicates that among 74 percent of Egyptians who believe Sharia law should be the official law of their country, 86 percent are favorable to punishing apostasy by death—which amounts to a final rate of 64 percent of Egyptians favoring the killing of apostates. Still, 64% prevalence is worrying enough for such a morbid preference.)

Other numbers from the same poll are deeply disturbing: 75 percent of Palestinians favor stoning as punishment for adultery, 58 percent of Jordanians support corporal punishments (including cutting off the hands of thieves) as criminal penalties, and as little as 15 percent of Moroccans believe that sons and daughters should have equivalent inheritance rights (as opposed to the rest who favor the enforcement of the Quranic rule granting females half the inheritance share of males).

Am I saying that Maher and Harris are right in asserting that Muslims in general—or in other words, in their majority—hold savagely violent, intolerant and misogynistic views? That would be the case if I trusted the Pew poll. But I don’t. What I am questioning here is not the methodology of the respected research Institute, but rather the genuineness of the answers provided by many of the 38,000 individuals it surveyed. Just picture the typical polling interview. Imagine you live in a country where Islam is the religion of the State, where criticizing the religion (let alone leaving it) is a criminal offense, where the educational system and the pervasive state media gang up every day to hammer that Islam is the highest moral norm ever—where, hell, even the opposition (mostly made of Islamist groups) does nothing but double down on religious intransigence… And here comes the Pew pollster, a total stranger with a list of disturbing questions pertaining to religion—questions to which the wrong answers can get you in trouble in many ways… Not the best conditions to conduct a credible opinion poll.

Polls, of course, are anonymous, and trained pollsters have their ways to fabricate empathy, including asking the interviewees if they had a good day before engaging them on more serious matters. But as nice as a warming-up chitchat might be, it simply cannot fend off the self-preservation instinct built over a lifetime’s experience of psychological pressure. Of course, the extent of the pressure (which itself depends on the extent to which religion is used as a political tool for social control) varies from one Muslim country to another. But then, so do the answers. While the Pew numbers indicate a high prevalence of the opinion that Sharia should be the law of the land in countries where Islam is the religion of the State (91 percent in Iraq, 83 percent in Morocco, 74 percent in Egypt…), the rate drops to 12 percent in Turkey, where secularism is a forefront constitutional principle. In other words, the more the questioned citizens are coerced into religiosity, the more likely they are to pick the safest answers—those consistent with what they were force-fed about religion since they were kids—when a pollster comes around.

The tricky part is that Western liberals such as Maher and Harris are the first ones to denounce the lack of freedom of thought and opinion in Muslim countries. However, they see no contradiction in trusting opinion polls as solid evidence of what Muslims think. Actually, let’s get to the bottom of this. If the religious opinions of Muslims are questionable, then so is their adherence to religion in the first place. I’m not saying that no citizen from Morocco to Indonesia genuinely adheres to Islam. I’m just stating the obvious: no one knows how many really do—and no one will ever know until people are free to form and state their religious opinions freely. This has an important implication: all of the mainstream Western debate about what 1.6 billion Muslims think is built on the false premise that… there are 1.6 billion Muslims in the first place.

When Sam Harris started lambasting Muslim intolerance, Ben Affleck jumped out to denounce his “racism”. But since when has Islam become a race? This goes beyond the accidental use of an inadequate word; it reveals a larger, fundamental flaw in the American race-related terminological system. The widespread use of the expression “Muslim-Americans” (as an equivalent to African-Americans or Indian-Americans, for instance) bears testimony of a deeply ingrained Western belief: when it comes to “Muslims” (understand: people living in or originating from the part of the world spanning from Morocco to Indonesia,) religiosity is not a choice—forced or not—as much as it’s a given. One that is as irrefutable as the color of the skin, or the ethnicity. There has been a centuries-long debate on whether Judaism is a religion or an ethnicity (most believe it’s both). But no such debate was ever held in and about the so-called Muslim world. That is simply because so-called Muslims already have a wide array of ethnic identities to pick from: Arab, Persian, Kurd, Amazigh, Pashtun, and the list goes on. Simply put: Islam is neither a race, nor a skin pigmentation, nor an ethnicity; it’s a personal belief. And personal beliefs, contrary to those things, are optional. Yes, even for Arabs, Persians, Kurds, and so on.

Even the Western liberals who burn cultural relativism with the torch of universal Human Rights are confused about this. At some point in Maher’s show, Sam Harris mentioned the “hundreds of millions of Muslims who are nominal Muslims who don’t take their faith seriously.” What an oxymoronic marvel this phrase is. If these people don’t take Islam seriously, why call them Muslims, “nominal” or not? And by the way, who nominated them as such? Despotic governments who never let them free to openly choose a faith (or none), extremist groups who consistently bully them into forced religiosity… and proud American liberals like Sam Harris who, when Islam is around, can’t call an atheist an atheist. Also, “their faith”? The whole point of being an atheist is to not have any! Harris, who would never self-identify as a “Christian atheist,” doesn’t see any problem in speaking about “Muslim atheists.”

This is not just a semantical point. It’s a paradigmal one. If you define people as irremediably Muslims, then the only choice you believe they have is either being a good or a bad Muslim, an extremist or a “moderate” (whatever that means). Western opinion makers must realize that the 1.6 billion people they flatly call “Muslims” hold in fact an incredibly wide array of spiritual convictions, including atheism and agnosticism—and arguably not in small proportions. It’s not just about faith; it’s also about lifestyle. Just ask whoever is familiar with the realities of the Middle East about the prevalence of alcohol consumption, non-marital sex and other not so Islamic social practices. You’d be amazed. Of course, because of the risk of legal reprisal, not officially sanctioned beliefs and practices are generally exercised discretely. But they are nonetheless very common within the alleged “Muslim populations,” and almost the norm within their educated civil societies. That is true to such an extent that speaking about “1.6 billion Muslims, most of whom are pious and devout,” as Washington Post and CNN pundit Fareed Zakaria recently did, is nothing short of delusional.

All American commentators, from the right to the left, agree on the necessity to empower reformists in the Muslim world. This must start with the way they look at them. If “true liberals” are willing to “stand for liberal values everywhere,” as Bill Maher dramatically exhorts them to do, they should start by granting everyone the freedoms they grant themselves. That despotic politicians in officially Muslim countries deny freedom of religion to their citizens is not a reason for Western liberals to do the same. On the contrary, it’s a good reason to do just the opposite. The West has serious reasons to fear the disease of Islamic extremism. But guess what: we local liberals are the antidote. Engaging in shouting matches about who among Western liberals holds the higher moral ground won’t advance the global liberal agenda in any way. If Western liberals truly believe in the universality of secular Human Rights, they should open their eyes and realize that we too are Humans—and part of the same universe.

Ahmed Benchemsi is the founder of FreeArabs.com