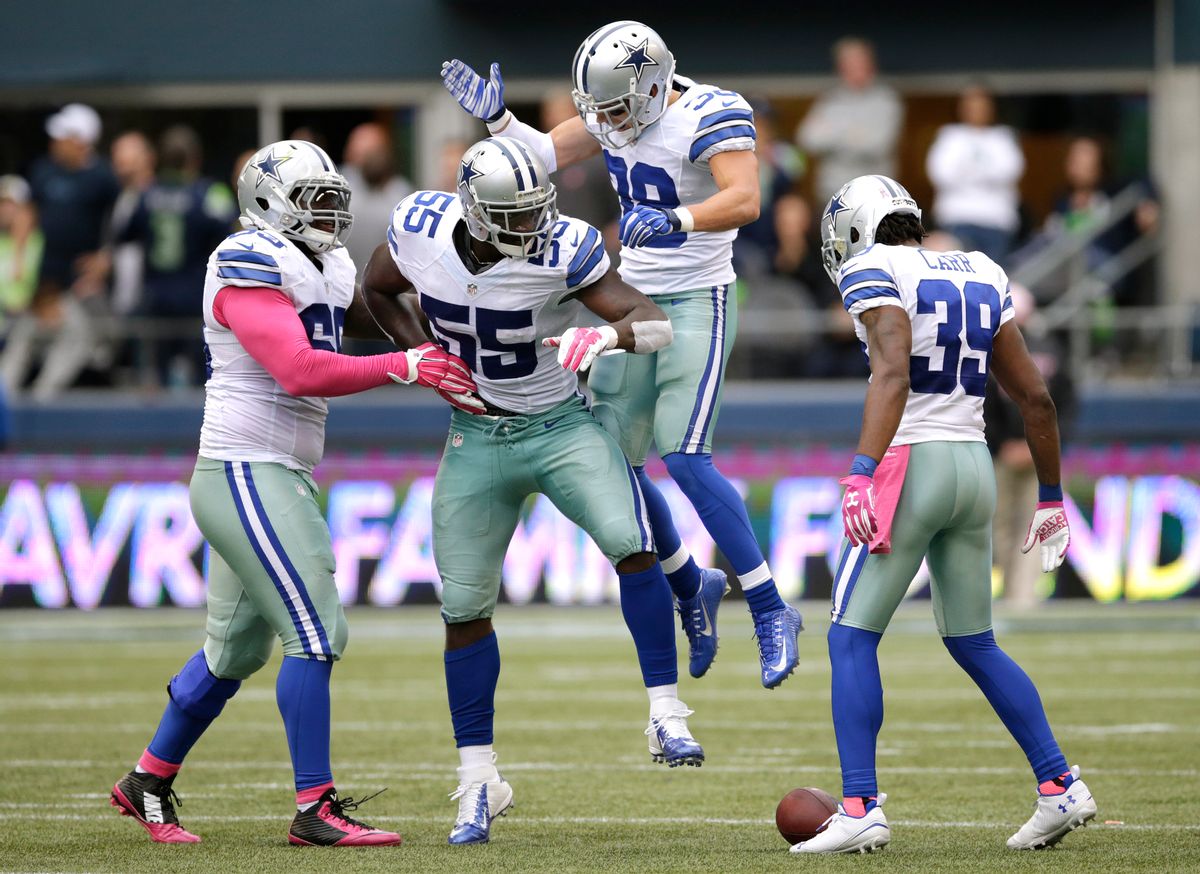 Dallas Cowboys middle linebacker Rolando McClain (55) celebrates with teammates after he intercepted a pass late in the second half of an NFL football game against the Seattle Seahawks, Sunday, Oct. 12, 2014, in Seattle. The Cowboys won 30-23. (AP Photo/Scott Eklund) (AP)
--

SEATTLE (AP) — DeMarco Murray kept trudging through all the 1- and 2-yard gains, confident at some point the gaps would break open.

Eventually the running lanes broke open, right in time for Murray to continue his record start to the 2014 season and give the Dallas Cowboys a validating road victory.

"I thought he did a really good job. Those are dirty yards. ... We thought it was going to be tough sledding to run the football but we had to be persistent with it. Our guys did an excellent job," Dallas coach Jason Garrett said.

Murray finished with 115 yards, continuing his streak of 100-yard games to begin the season, and his late touchdown proved to be the winning points in Dallas' 30-23 win over the Seattle Seahawks on Sunday.

Murray joined Jim Brown (1958) as the only running backs in NFL history to start a season with six straight 100-yard rushing games. And Murray did it against the league's best run defense, which had not allowed a running back more than 38 yards in a game this season. His 15-yard TD run with 3:16 left gave the Cowboys a 27-23 lead.

"I really think he has shown his maturity as a back, sticking with us and sticking with it and coming out on the back end on a couple of those late in the game," Dallas tight end Jason Witten said.

The Cowboys replicated the Seahawks' formula, but performed with more efficiency and better execution than the home team. Dallas leaned on Murray and controlled the time of possession. They got timely throws from Tony Romo, and the Cowboys' defense confused and flustered Russell Wilson and Seattle's offense.

Dallas outgained Seattle 401-206, becoming the first team since New England in 2012 to gain more than 400 total yards against the Seahawks in Seattle in the regular season. The Cowboys ran 70 offensive plays to 48 for the Seahawks and had 23 first downs to nine for Seattle.

It was a statistical domination that should have equated a blowout. But two special teams miscues led to 14 points for Seattle and put Dallas in the position of rallying in the fourth quarter.

"We have come a long way. We have a long way to go and a lot we want to still accomplish, but at the same time this football team is trying to find itself," Dallas defensive back Brandon Carr said. "We are in a good place right now where we are rolling and each and every day we can focus on our job and have fun with this."

Here are other things that stood out from the Cowboys' stunning victory at Seattle:

DRIVES ALIVE: Dallas held the ball for more than 37 minutes, helped in part by a nearly 10-minute drive in the second quarter Behind that dominance in ball control was the Cowboys' efficiency on third down. Dallas entered Sunday as the top third-down team in the NFL at 55.6 percent, and went 10 of 17 against the Seahawks.

The most important was the third-and-20 completion to Terrance Williams on Dallas' final touchdown drive. Romo avoided a sack by Bruce Irvin and found Williams along the sideline in front of the Cowboys bench, dragging the tips of his toes on the turf.

"We've been doing that every game. That's not anything new," Romo said. "I know, against these guys, sometimes teams don't do that."

WHERE'S LYNCH: Seattle seemed to lose some of its identity. Marshawn Lynch seemed to be an afterthought on offense, getting just 10 carries. Wilson hit Jermaine Kearse for 53 yards in the first quarter and his other 13 completions went for 73 yards. The 206 total yards were third-fewest since Wilson became Seattle's starting QB in 2012.

McCLAIN's DAY: Rolando McClain was questionable coming into the game with a groin injury. He was able to play and it proved vital with starting linebacker Bruce Carter out with a thigh injury. McClain had only four tackles but had one tackle for loss and he intercepted Wilson near midfield in the final minute.

BLOCK PARTY: Seattle jumped out to a 10-0 lead thanks to the first blocked punt for a touchdown since ... the Seahawks played the Cowboys two years ago. Baldwin lined up the block on the perimeter of the return but sprinted to the end of the defensive line and came unblocked to smother Chris Jones' punt. The ball was picked up by Mike Morgan who returned it 25 yards for the score.

Seattle's blocked punt for a TD in 2012 against the Cowboys also gave the Seahawks a 10-0 lead in that game.

RUNNING RUSSELL: After getting praise for his performance last Monday against Washington, Wilson was rarely able to run. Wilson ran only twice for 12 yards as Dallas was solid in not letting him scramble outside the pocket.