Democrats' next big hero? Why you should back South Dakota's Rick Weiland now

Rick Weiland is finally getting some urgent, last-minute (indirect) support from the national party. He's worth it 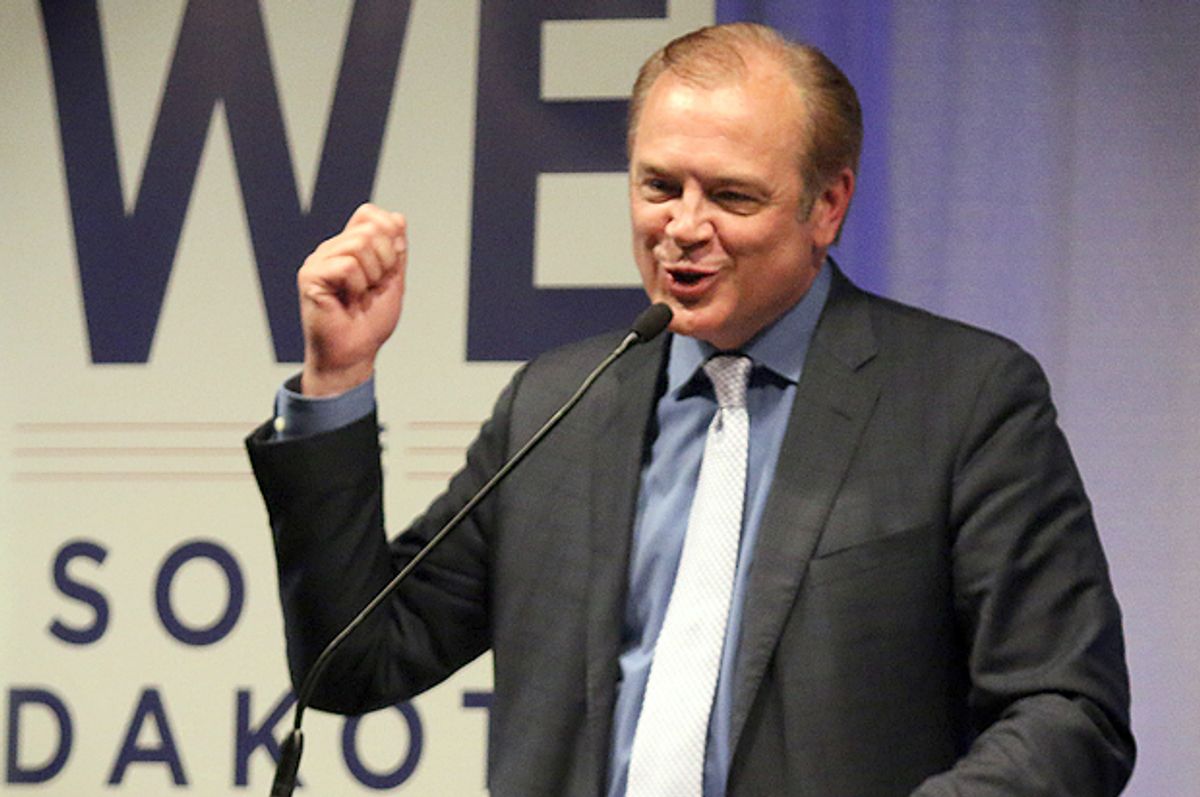 Late last month, The Hill reported on a feud between Harry Reid and the DSCC on one side and former South Dakota Senate majority leader Tom Daschle on the other. Daschle has been furious that Reid has refused to endorse, and the Democratic party has barely spent a dime on, the campaign of Democratic Senate candidate Rick Weiland. (We're not sure that an endorsement-endorsement from Harry Reid would help any Democratic Senate candidate, but a tacit nod towards the party's money apparatus to support someone sure would.) It goes back to candidate recruitment last year, when Reid and the party wanted former Rep. Stephanie Herseth Sandlin to run. She chose not to, but Rick Weiland stayed in. Since then, the help Weiland's been getting from the party has been... [crickets].

The story was easy to dismiss, even a couple of weeks ago, because who cared about Harry Reid and Tom Daschle fighting over some lost Senate race? Now we know, though, that the race is hardly lost. It's a three-person race between Republican Mike Rounds, independent (and former Republican Senator) Larry Pressler, and Weiland. A well-publicized poll last week showed Rounds leading Pressler by a modest 3 percentage points, and Weiland by 7. The numbers are close enough that the DSCC is putting $1 million into the race -- not to support either Pressler or Weiland, but to attack Rounds.

Politico wrote up some opposition research on Pressler late last week that showed Pressler's principle residence is in Washington, D.C. One of the things we've learned from races like, say, Kansas Senate, is that revelations about candidates not *actually* living in the states where they're running can be damaging. You could argue that these attacks are Very Silly -- you don't need to sit on the recliner in some house in Kansas or South Dakota all the time in order to know how to represent a state's interests in Washington D.C. -- but they do work.

Suppose this news hurts Pressler. Then that offers Weiland a chance to grow. If Weiland were to become the predominant challenger to Rounds, that would make things easier for the Democratic party -- instead of hoping that some independent (who was a Republican until like five seconds ago) wins and chooses to caucus with the Democrats, a real-life Democrat could be the one to save Tim Johnson's seat.

The other great thing about a Rick Weiland possibly emerging as Rounds' main rival is that Rick Weiland is THE MAN. Just check out this platform!

But in a telephone interview, Weiland insisted the skeptics were wrong, and that there remains a path to victory for him. And he laid out a strikingly progressive platform as the vehicle to get there: An option of Medicare for all, otherwise known as a new public option; expanding Social Security; aggressive opposition to the Keystone pipeline; and a Constitutional amendment overturning Citizens United.

Can we just make this guy president-for-life, right now? This is such a refreshing contrast to the "centrism" (Social Security cuts) espoused by Pressler or Greg Orman, the other great independent hope of 2014. If only the DSCC had been giving this guy the big bucks from day one...

...but you can understand why they didn't, can't you? Whatever complaints that Democratic party and Harry Reid may offer about Weiland "messing with their timetable" a year ago, there's an whiff of "dirty hippie" about him that Democratic party money people despise and consider not viable. There is no way a dirty hippie like this Weiland fellow can win a red state, and so forth.

A Democratic source who requested anonymity said, “The DSCC has private polling showing that Weiland has no chance of winning in any combination of the field, including in a head-to-head matchup against Rounds. He and Sen. Daschle are wasting everyone’s time and resources, including their own.”

That was two weeks ago. Now, the DSCC is putting $1 million in the race, and South Dakota media is cheap. There may be time to save the race yet. But imagine what could have been if Weiland's campaign had national support from the beginning.