It's time to admit the truth: People who cut health funding and don't like government have not helped this crisis 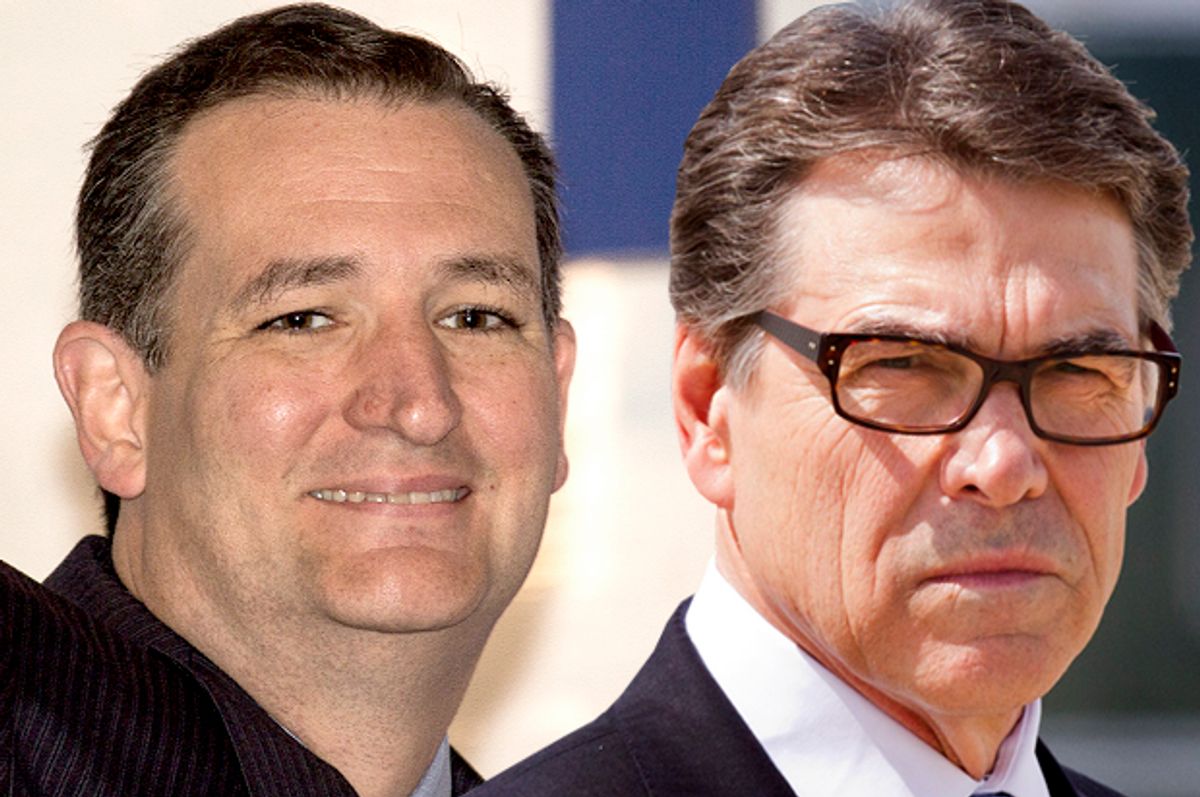 If not for serial budget cuts to the National Institutes of Health, we would probably have an Ebola vaccine and we would certainly have better treatment, NIH director Dr. Francis Collins tells the Huffington Post’s Sam Stein. This comes on the heels of reporting that the Centers for Disease Control’s prevention budget has been cut by half since 2006, and new revelations about how botched protocols at the Dallas hospital that turned away Thomas Eric Duncan and then failed to treat him effectively also led to the infection of one of Duncan’s caregivers.

Yet most of the media coverage of the politics of Ebola to date has centered on whether President Obama has adequately and/or honestly dealt with the disease. “I remain concerned that we don’t see sufficient seriousness on the part of the federal government about protecting the American public,” Texas Sen. Ted Cruz told reporters. Cruz is probably the wrong guy to talk about seriousness: his government shutdown forced the NIH to delay clinical trials and made the CDC cut back on disease outbreak detection programs this time last year.

I find myself wondering: When, if ever, will the political debate over Ebola center on the way the right-wing libertarian approach to government has made us less safe?

My fans at Newsbusters and other right-wing sites were outraged last week when I raised questions about whether Texas Gov. Rick Perry shared some responsibility for the nation’s Ebola crisis with President Obama, since the outbreak occurred in his state on his watch. Now that a second person has been infected there, I think the question is even more relevant.

The GOP approach to public health was crystallized at the 2012 debate where Rep. Ron Paul – another Texas politician -- said it wasn’t the government’s responsibility to take care of a hypothetical young man who showed up in the emergency room very sick after he decided not to buy insurance. “That's what freedom is all about, taking your own risks," Paul said, deriding "this whole idea that you have to prepare to take care of everybody …"

"Are you saying that society should just let him die?" moderator Wolf Blitzer asked. And the crowd roared “Yeah!” (For his part Paul answered no, but said hospitals should treat such cases as charity and not be compelled to do so.) Lest you think either Paul or that Florida audience represented a minority sentiment in the GOP, recall that none of his rivals, not even Mitt Romneycare, challenged Paul’s approach at the debate.

But now we know what happens when hospitals fail to adequately care for uninsured people who turn up in the ER: They can die, which is awful, but they may also spread disease and death to many other people. It’s pragmatism, not socialism, that commits governments to a public health agenda.

That agenda, however, has been disowned by the modern GOP. Sarah Kliff got lots of attention for her Vox piece starkly depicting how the Centers for Disease Control’s prevention budget has been cut by more than half since 2006. The chart she used actually came from a piece in Scientific American last week, which I hadn’t seen before. It’s must-reading: it dispassionately explained the way we’ve underfunded and degraded our public health infrastructure. And again, it made me think about the Republican policies that have hampered our ability to fight this crisis.

Isn't there a fair way to say that cutting 45,700 public health workers at the state and local level, largely under GOP governors, was irresponsible? As was slashing the CDC's prevention budget by half since 2006, or cutting the Affordable Care Act's prevention budget by a billion? Sen. John McCain wants an "Ebola czar," but the Senate is blocking confirmation of the Surgeon General. Isn't it fair to ask whether the constant denigration of government, and the resulting defunding, now makes it harder to handle what everyone agrees are core government functions?

It seems relevant to me that Texas is 33rd in public health funding. It’s clear now that not just the hospital but state and local authorities responded inadequately to Duncan’s illness. His family and friends were quarantined, but left to fend for themselves; county public health officials didn’t even provide clean bedding. “The individuals, it’s up to them … to care for the household,” Erikka Neroes of Dallas County health and human services told the Guardian a week after Duncan had been admitted to the hospital. “Dallas County has not been involved in a disinfection process.”

When the disinfection process began, belatedly, there’s evidence that was botched as well. The Guardian found a team of contractors with no protective clothing simply power-washing the front porch, for instance, when it should have been scrubbed with bleach. A baby stroller sat nearby.

As the great science writer David Dobbs concluded last week: “So the richest country on earth has no team to contain the first appearance of one of the most deadly viruses we’ve ever known.”

I’ve found myself wondering if Ebola is unquestionably a plus for Republicans three weeks before the midterm, as everyone (including me) has assumed. Certainly Republicans think it is; that’s why vulnerable Senate candidates, from Thom Tillis in North Carolina to Scott Brown in New Hampshire, are fear-mongering about it.

But if Democrats are the party of government, and thus seen as culpable by voters when government does wrong, aren’t government-hating, budget-slashing Republicans politically vulnerable when we need government to do something right, and the cuts they’ve pushed have compromised its ability to do so?  Or does IOKIYAR mean the media just shrugs when the GOP fear-mongers, but would punish any Democrat respond in kind?

Blogger Kevin Drum likes to complain about a Democratic “Hack Gap” – the fact that liberal pundits are too willing to criticize Democratic leaders, while GOP pundits more often line up behind theirs. I don’t agree with Drum – in the end, Chris Matthews and I didn’t cost the president his re-election in 2012 – but it’s an interesting debate. Personally I think Democrats have a “Brilliant and Ruthless Campaign Operative Gap,” when it comes to shamelessly exploiting the other side’s political weakness.

The GOP’s anti-government crusade has hampered our ability to face the Ebola challenge. In an election year, there’s nothing wrong with Democrats saying that clearly. Campaigns should be cutting ads right now spotlighting the way Republican budget cuts have devastated the public health infrastructure we need to fight diseases like Ebola. Here's one such ad from the Agenda Project.