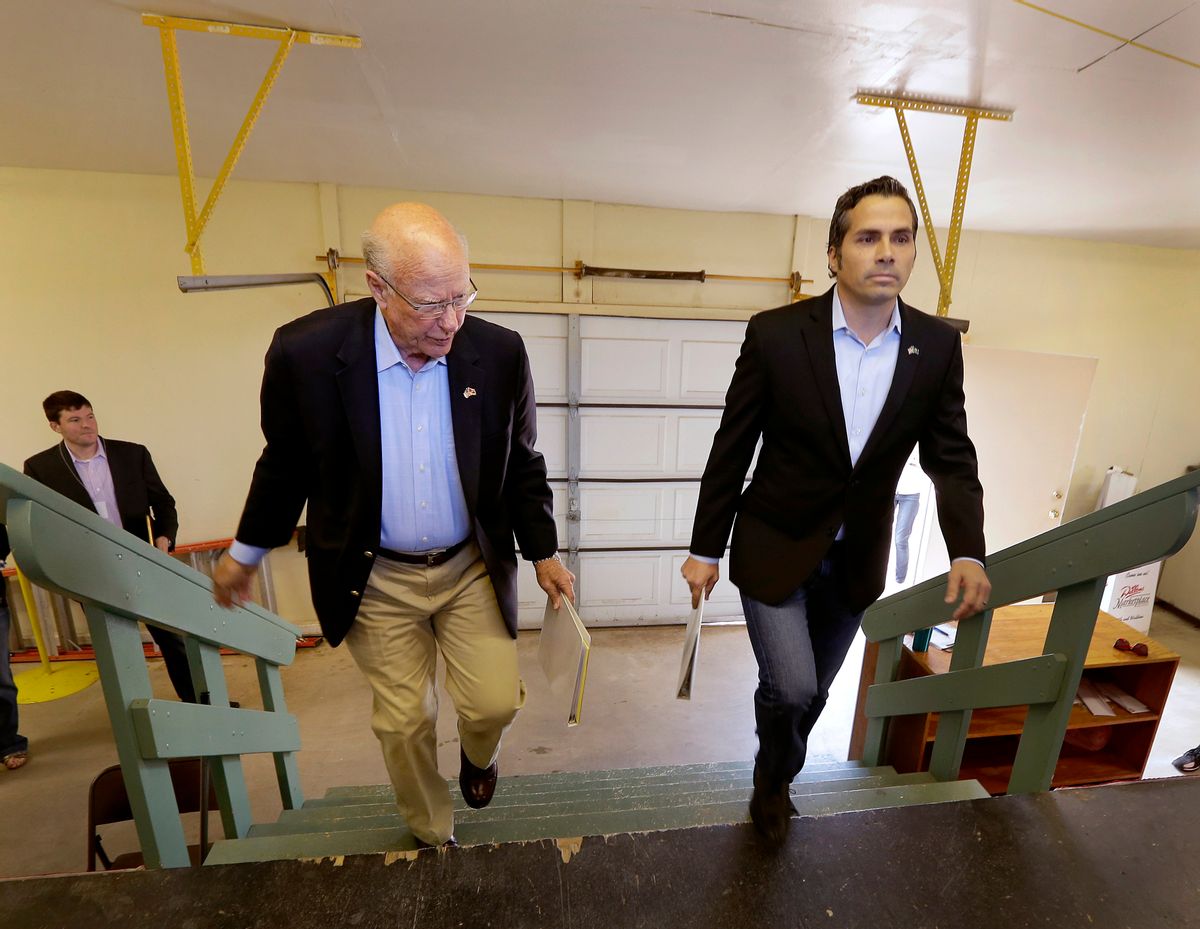 FILE - In this Sept. 6, 2014 file photo Republican Sen. Pat Roberts, left, and Greg Orman walk to the stage before a Senate debate in Hutchinson, Kan. Orman, an independent candidate challenging Roberts for the U.S. Senate in Kansas, has turned a longshot independent bid into a threat to the GOP veteran. Even if Roberts survives the challenge from independent Orman, Republicans also must lock down South Dakota, a once-unthinkable concern. (AP Photo/Charlie Riedel, File) (AP)
--

WASHINGTON (AP) — A free steak dinner for everyone who predicted the Senate races in Kansas and South Dakota would be in doubt three weeks from Election Day.

Or that the most-discussed campaign TV ad would show a smiling woman talking about castrating hogs.

When the run toward the 2014 election began, several things were certain:

—Domestic issues, and especially the president's health care law, would rise above all others.

All that, and more, has changed.

Kasich's re-election now seems so assured that fans talk of his making a second run for president. (It helped that his Democratic opponent was found in a dark parking lot with a woman who's not his wife.)

In the Senate, Republicans still seem on track to pick up the six seats they need to take control. They recruited good candidates and focused on several states Obama lost. Democratic retirements made West Virginia and South Dakota slam dunks.

But with Senate control so tantalizingly close, Republicans find themselves investing time, staff and money into protecting a three-term senator in Kansas — one of the most conservative states.

"Anyone who predicted that last year is either psychic or psychotic," said Matt Bennett, a veteran of Democratic campaigns.

Even if GOP Sen. Pat Roberts survives the challenge from independent Greg Orman, Republicans also must lock down South Dakota, a once-unthinkable concern.

Democrats are pouring $1 million into TV ads attacking Republican Mike Rounds, a former governor. Driving the uncertainty is third-party candidate Larry Pressler, who spent 18 years in the Senate as a Republican. Republicans answered quickly with $1 million worth of TV ad buys.

If Republicans lose either of those states, and fall one seat short of controlling the Senate, it will rank among the most crushing failures in recent political history. Especially with a 2016 map that strongly favors Democrats.

— The "incredible disappearing Obamacare debate," as described by Dan Schnur, a former top Republican aide who now teaches at the University of Southern California.

For the third straight election, attacking Obama's health law is the Republicans' go-to tactic. But strategists in both parties say the relentless criticism is losing punch as millions of people acquire insurance under the law. Many GOP candidates have broadened their denunciations to Obama's overall competency and tying their Democratic opponents to him generally.

— The rise of fear — of terrorism and disease, especially — as an issue.

Neither was a topic of discussion during the months of state primaries. But the rise of Islamic State militants, Obama's decision to order airstrikes against them, and the outbreak of Ebola have roiled the final weeks of the campaign.

Several Republican candidates are replacing their ads attacking the health law with sometimes frightening warnings about the risks and threat of the militants and the virus.

Democrats call the claims grossly exaggerated and fear-mongering. Yet they worry about the impact.

"Democrats are once again being seen through the old lens about the party on security issues: as weak, indecisive, and afraid to use force," Bennett said.

— The power of one TV ad. Joni Ernst was struggling in Iowa's crowded Republican primary for the seat being vacated by retiring Democratic Sen. Tom Harkin. Then she appeared in a TV ad cheerily saying: "I grew up castrating hogs on an Iowa farm. So when I get to Washington, I'll know how to cut pork."

The ad helped push her to an easy primary victory, and her rise began. She's now in a neck-and-neck race with Democrat Bruce Braley, a congressman who started the race as a clear favorite.

Both candidates have stumbled at times. But Ernst proved that a pitch-perfect ad can break through the din and transform a race almost overnight.

— The role of third-party candidates. They run in every election, but rarely play much of a role. Not this year.

Orman refuses to say whether he would align himself with Democrats or Republicans. But he still shook up the Kansas Senate race by driving out the Democratic nominee and possibly consolidating the anti-Roberts vote.

In South Dakota, Pressler didn't scare away the Democrats' nominee, but he has rattled Republicans with his rise.

Third-party Senate candidates in Louisiana and Georgia could force runoffs that might leave control of the Senate in doubt until December, or even January. Both states require a runoff if no one exceeds 50 percent on the November ballot.

In Maine, Republican Gov. Paul LePage has angered many voters, "but he's alive because of a liberal third party gadfly hurting the Democrats," Bennett said.