7 horrifying things that can live inside your body

A woman recently found a 3-inch leech in her nose. We don't want to say it could have been worse, but... 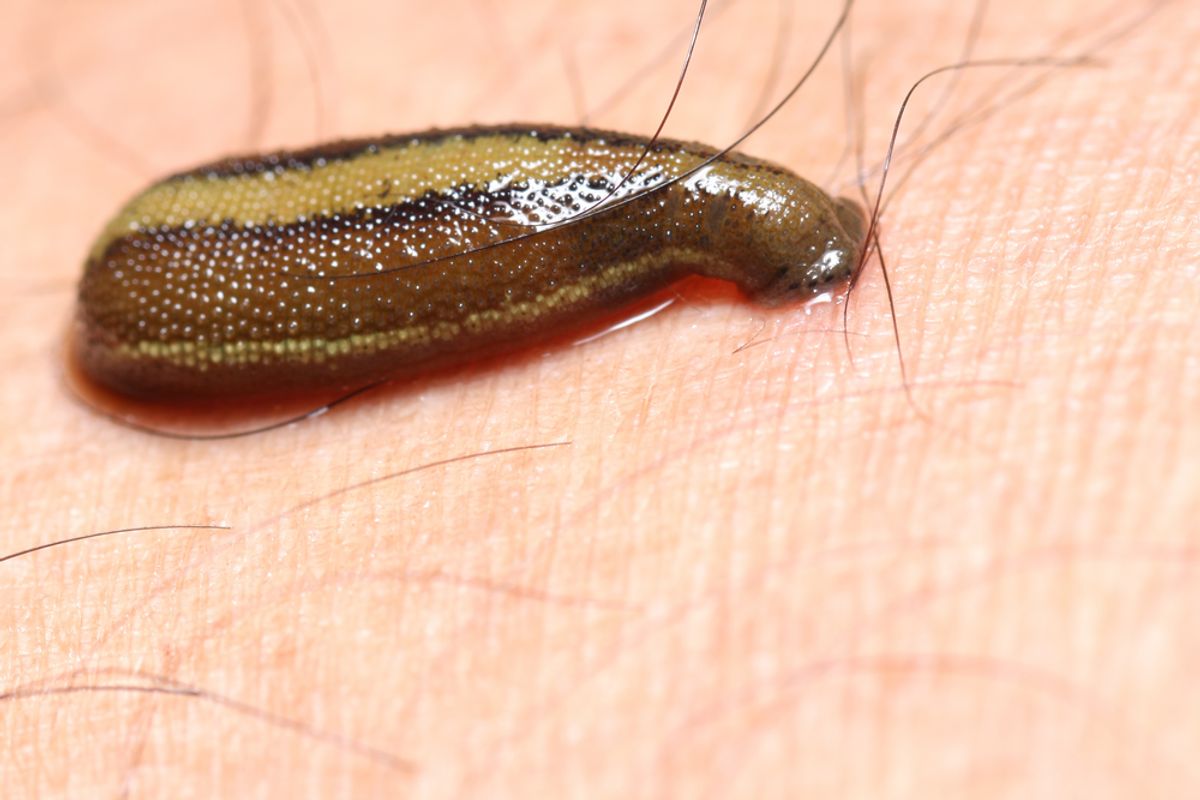 Daniela Liverani, 24, is a stronger, sturdier, braver woman than I will ever be, because she found a three-inch leech inside her nose --which had been living there for a month -- and didn't immediately self-combust.

After returning from a vacation in southeast Asia, Liverani began to get nose bleeds, but she assumed it was because she had gotten into a motorcycle crash. Then, a dark shape slid out of her nose, just a little, which she thought was a blood clot. "Your initial reaction isn't to start thinking, 'Oh God, there's obviously a leech in my face," she told BBC Radio Scotland.

She didn't realize that she was housing a small monster until she took a shower: "On Thursday, I jumped out the shower and I unsteamed the mirror and I had a proper good look, and I could see little ridges on him."

BBC reports on the horrific incident:

She went to accident and emergency where doctors removed "Mr [sic] Curly" - as Ms [sic] Liverani nicknamed the leech - with forceps and tweezers.

"The doctors did a great job, hats off to them, because obviously they don't see something like that every day," she added.

"They did what they could in a strange situation while trying to keep their cool."

In honor of Liverani and Mr. Curly's plight, here are seven of the most horrifying things that can live inside you.

Leeches are slug-like worms that don't usually live inside of people, but we decided to include them in honor of Mr. Curly. The worms are equipped with suckers on the front and back of their bodies which they use to latch onto skin and suck blood. Most leeches can grow up to 8 inches, although the giant Amazon leech can reach 18 inches, which is a true nightmare. The process of leeching has been used in medicine for centuries--the saliva contains anesthetizing substances which dilates blood vessels, increasing blood flow and preventing blood clots.

This hellacious creature is known because of the disease it causes: dracunculiasis, or Guinea worm disease (GWD) which is contracted when one drinks water containing its larvae. Once the larvae are released into the stomach, they pass through the digestive track and enter the body cavity where the females will grow into adults over the next 10-14 months. The worms, which look like pearlescent three-foot-long spaghetti, then poke through the skin and the only way to get rid of it is to pull the whole thing out.

This microscopic worm lives in the human lymph system, causing a disease called lymphatic filariasis. The disease is spread when a mosquito bites an infected person, causing little worms to infect the mosquito, who in turn infects a new person. Once in the blood stream, the worms will grow into adults, living up to seven years. Although most people with lymphatic filariasis will not develop symptoms, a small percentage will get lymphadema, causing a large amount of excess fluid to build up in the legs, arms, breasts and genitalia.

One acquires this worm by being bitten by an infected deerfly. The disease, loiasis, can cause itchy swellings known as Calabr swellings and something called eye worm which means you can literally see the tiny worm inching its way across your eyeball. These can be removed by local extraction.

5. Candiru, or the vampire fish

A candiru is a horrible 1 inch long parasitic catfish that drinks blood to survive (hence its nickname). Although it is often found in the gills of fellow fish, it has earned its fame from attacking humans via their urethras. Once inside its new home, the candiru will shoot out little spines on its gill covers which can cause inflammation, hemorrhage or death. People who live along the Amazon avoid infection by wearing tight, sturdy clothing, avoiding urinating in rivers and even tying off one's genitalia to prevent anything from entering it.

The human botfly is unique in that it doesn't actually enter people--instead, it lays its eggs on mosquitos and ticks, which hatch into maggots when they feel humans' body heat. They then burrow beneath the skin, causing a large white boil, and eat blood and tissue. As the maggot grows, the skin begins to swell which can be extremely painful. The host human might also feel biting and wriggling. If not surgically extracted by a doctor, a maggot will simply drop from its hole six to eight weeks later.

It can be hard to live with the knowledge that you've wronged or been wronged by a friend, co-worker or family member. Some people stay up all night or stop eating. Others lash out at their loved ones. Remedies for this pesky bug include honesty, therapy, and deep Christian repression.