A nation of Sayrevilles: Why locker room sexual assault is all too common 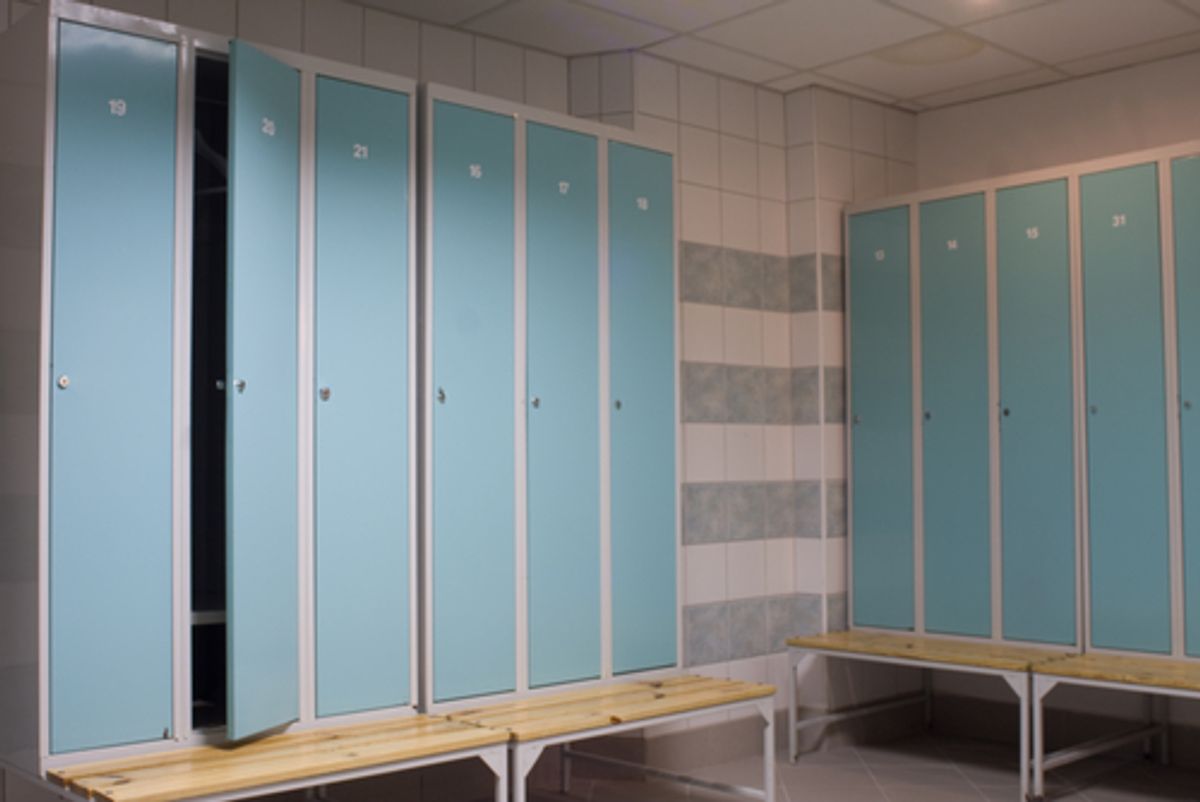 It has been a really bad couple of weeks for boys in my home state of New Jersey.

In mid-September my home town was rocked by the report of a female high school teacher who was accused of sexually assaulting three of her 15 year old students.

Then last week, the incredibly disturbing story of hazing meets sexual abuse emerged from the small town of Sayreville, NJ. The gut-wrenching allegations are that upperclassman players on the high school football team at Sayreville War Memorial High School have been hazing freshman teammates. But the term “hazing” doesn’t quite do what was happening justice. According to media reports:

“It would start with a howling noise from a senior football player at Sayreville War Memorial High School, and then the locker room lights were abruptly shut off.

In the darkness, a freshman football player would be pinned to the locker room floor, his arms and feet held down by multiple upperclassmen. Then, the victim would be lifted to his feet while a finger was forced into his rectum. Sometimes, the same finger was then shoved into the freshman player’s mouth.”

This was “pervasive” and “widespread” behavior. According to reports, this was happening in the locker room nearly every day, with many students participating, others watching, and nobody doing anything about it. A criminal investigation is now underway, and so far seven of the players – aged 15 to 17 – have been charged with sexual assault.

In the wake of the allegations, which were brought by a parent of a freshman player, the District Superintendent announced that he was canceling the remainder of the school’s football season. In his remarks, he indicated that none of the coaching staff had been aware of what was going on, and that “this behavior was accepted and tolerated by the players.” To date, the coach, George Najjar, has not spoken or released a statement.

This is a viscerally shocking and disturbing story. It’s uncomfortable.  And we must not look away.  We must not shrug is off as ‘boys being boys’ gone a bit too far. Because this is not an isolated incident. It is no small deal.

According to MaleSurvivor Executive Director Christopher Anderson, the number of boys facing this kind of sexual assault is much higher than we realize and much higher than we want to think about, and our ‘boys will be boys’ dismissal of the harm being done to our children only condones more abuse and creates more victims among our boys.

The first thing that shocked me about this story was that it happened at all: Why would boys engage in this kind of behavior? How on earth can this happen? And how often does this happen?

First, we should be clear what we’re talking about when we say “this kind of behavior.” This is not appropriately characterized merely as “hazing” or “hazing of a sexual nature.” It’s rape. The holding down of another person and forcibly penetrating them. Yes, it occurred as part of a football team hazing program and it is boys acting against other boys, but – if the allegations are true – it is rape just the same.

Why would boys engage in this type of behavior, and how can this happen?

There are serious questions to be answered, both regarding the supervision by the school and coaches, as well as the social construct under which the high school boys participated in and allowed this behavior to go on unchecked, apparently for years.

The school and coaches are being investigated. Clearly, if the allegations are correct about how long and how often this was going on in the locker room, there was a systematic failure of supervision. If the allegations are proved out, there must be accountability in Sayreville, at both the institutional (grown-up) and individual (player) levels.

But trying to figure out how the players got away with doing this for so long – and why no one found out and no one said anything – is only the first question we need to answer. On a broader level, we must also seek to understand and address the cause of this kind of behavior in boys, in us.

The social power dynamics of groups are complex – this is true in general and especially in teenagers. How is social order asserted and maintained?

Well, this is one way. Through violence, abuse, and humiliation. The human failings that we see in our own society and history are the very same ones that are being mirrored in these children, these teenage boys. That’s scary.

Hazing is a power play. And it’s an ugly self-reinforcing cycle. Those who were once victims ascend to the role of alpha males, where they get to inflict harms on a new set of victims, and put their own victimhood behind them. And so on and so forth. Wash, rinse, repeat.

Hazing on sports and in fraternities is often defended by its perpetrators as a “rite of passage,” a way of developing character, solidarity, and proving one’s mettle. This view has been correctly criticized. What was going on in the Sayreville locker room was not an exercise in character building. It was an exercise in asserting dominance over victims; it was an exercise in abuse.

Indeed hazing has more aptly has been described – in the context of tragic deaths or injuries from fraternity hazing incidents – as rites of passage gone wrong. Plainly put, hazing is bullying, and can result in tragic physical or psychological harms.

The sexual aspect to the hazing at first seems impossible to comprehend. But a deeper look provides some clues. As some have explained, violating someone sexually is a terrifyingly effective way to assert dominance over a victim. The emasculation and humiliation of being held down and penetrated against one’s will, will strip any man of his power, and clearly place them at the bottom of the social order.

How often does this happen?

In the aftermath of this year’s NFL bullying scandal and what we know about the machismo of locker rooms, it would be easy to make assumptions that this type of bullying is endemic in football locker rooms. But is it?

Most of what we know is anecdotal, but some of the data indicates that it happens more often that we may realize and acknowledge on football teams and in fraternities.

For example, allegations in an action brought in 2011 against AEPi and UC Davis detail “hazing rituals” like “ratfucking,” where members were “forced to undress in front of the group while members touched his penis and made sexual comments.”

In 2013 there were over a dozen reports involving high school boys who had sodomized other boys with foreign objects, with over forty victims. One study published in the Journal of Youth and Adolescence has claimed that nearly 10 percent of high school males report suffering some form of sexual assault including, in some cases, forced oral sex or rape. According to Mary Madden, former co-director of National Collaborative for Hazing Research and Prevention:

The second deeply shocking aspect here was the reaction of the parents to the cancellation of the Sayreville football season.

On the field, Sayreville’s football program had a winning tradition, bringing home the state championship in three of the past four years. In the wake of the cancellation announcement, many expressed the view that canceling the season was unnecessary, referring to past hazing incidents that were investigated while the season was allowed to continue.

Sayreville Superintendent, Richard Labbe, did the right thing here. And he did it for the right reasons. Labbe recognized that the first priority is to put accountability on the community for such vile bullying:

“We can set the standard right now for all kids for all school districts in Middlesex County, in the state and in the nation that we are not going to stand around and allow kids to do this to one another. We are going to start holding our students responsible for doing the right thing and reporting these kinds of behaviors. I believe with every fiber of my body that the only way we are going to stop bullying is if we get the kids to go to an adult or to the authorities.”

According to reports, a large group of parents at the Board meeting where cancellation was announced vocally disagreed with the decision. One mother stated: “I’ve never seen so much dedication out of my son, and I want him to play the rest of this season,” to a roar of applause. Another parent said the alleged incidents may involve nothing more than a player “getting tapped on the butt by one of his teammates.”  Another reportedly said “What you’re saying is harassment is them playing around,” adding that “when it comes to football in Sayreville, we protect each other.” Still another parent reportedly saidthat her son had “taken his knocks” as a freshman, and now, as a junior, was being penalized again by canceling his football season.

We’re also seeing comments on social media like this: “Still feel the program should not have been shut down, the victims are also being punished. So now they get to be victims again.”

Equally – and perhaps more disturbing – are some of statements made by the high schoolers themselves. According to a Sports Illustrated article, one senior said “It happens at all the schools, it’s just that it happened to leak out. Why don’t you go to the next town over where the same thing’s happening? You can write a report on that.” Another student remarked “You know boys, they play around with each other, but come on. We’ve got the best football team in Middlesex County. That stuff doesn’t happen here.” Many of these comments have strong overtones of the insidious “boys will be boys” refrain, a way of thinking that excuses bad behaviors and undermines the seriousness of wrongs.

Meanwhile, those that had the courage to ultimately speak up about the incident to the authorities and the school have remained anonymous, in part out of fear of retaliation.

As a mirror of what we want our society to look like, and what we should and must be teaching our children, this is precisely and pathetically backwards.

Let’s get our priorities straight.

This is a community that is reeling from a terrible abuse worked by teammates upon teammates, by students upon students, by boys upon boys. That comes first. And second. And third. We need accountability, education, love, and healing.

High school football games? (Yes, even a game that could lead to scholarships for some).

That all takes a back-seat.

If these are the values that are flowing from this football program and community and this is the behavior that is-  tacitly or otherwise – condoned and unleashed out into the world, no football game is going to matter.

Our initial inclination when we read about this story is to recoil in disgust. That’s understandable.

But we shouldn’t look away. We shouldn’t minimize its seriousness or write it off as “kids playing around.” We shouldn’t make excuses or cloak this behavior in the garb of “rites of passage.”

We can’t do that.

Because that’s not true.

This is happening – in our colleges, in our high schools, in our communities.

It is on us – as parents, as educators, as members of our communities – to do our best to understand the dynamics that lead to this behavior and to do everything in our power to put an end to these abuses.