Christian right's vile PR sham: Why their bizarre films are backfiring on them

I once was a fundamentalist Christian and right-winger. Now I watch their films and see their heavy-handed tactics 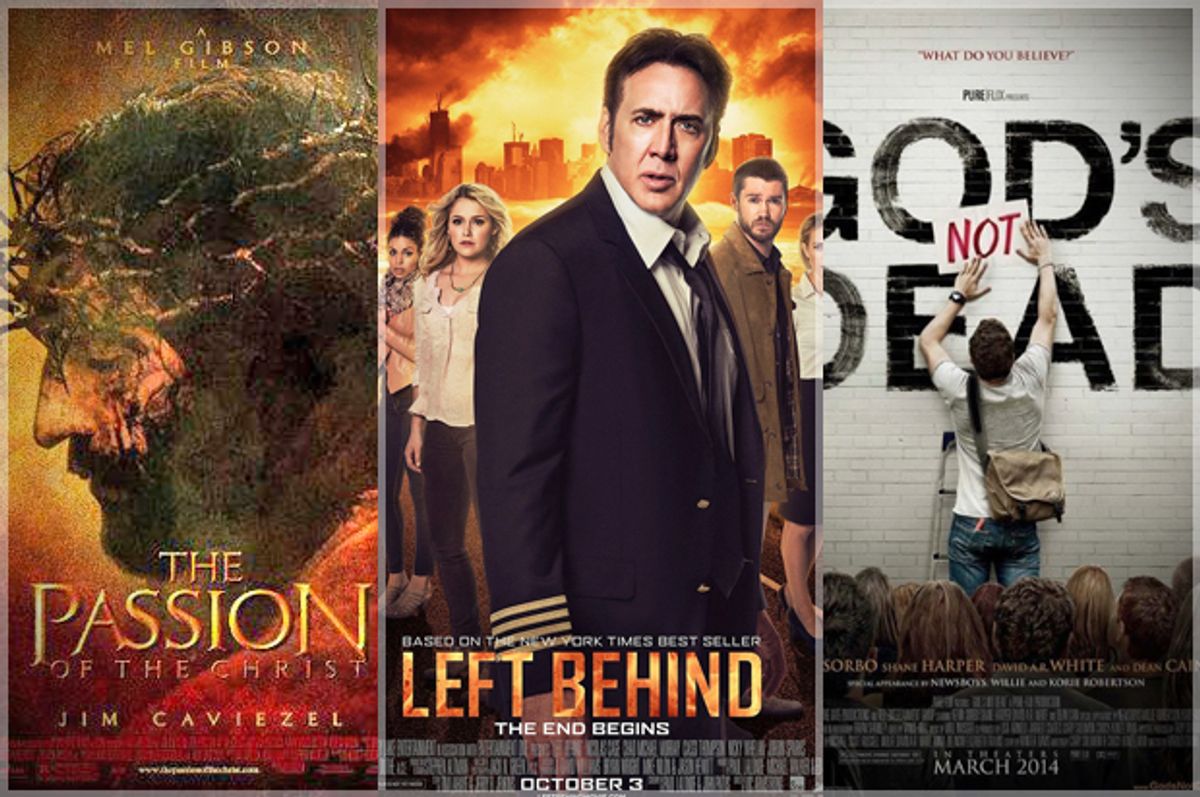 “Millions of believers will suddenly vanish into thin air," Willie Robertson, best known for his work on Duck Dynasty, exclaimed recently. He was promoting the new Christian movie "Left Behind," where he has an executive producer credit. "It’s a warning to those, if it happened today, would be left behind. And I believe that people are going to make the life-changing decision to follow Christ on the way home from the theater … opening the door to unbelievers has never been this fun.”

I’m sorry to inform Mr. Robertson, but I watched "Left Behind" and spent my entire ride home only contemplating the two hours of my life back that I will never get back. The film proves that conservative American Christians have not learned an important childhood lesson: You can’t threaten, vilify or bully someone into liking you. In simpler times, stories of persecution and Christian supremacy were delivered in sermons and badly written books, but a recent batch of films has hit theaters with the net effect of corralling American fundamentalists into an ever-shrinking intellectual ghetto. I watched not only "Left Behind," but also a sampling of some other recent Christian films in an attempt to understand what messages they convey to this ever-more-insular community.

By way of background, I have lived both irrational religion and right-wing politics. To “find myself” and salvage a crumbling marriage, I converted to fundamentalist Christianity in my early twenties. Both my religion and marriage ended up failing, but I remained supportive of right-wing social politics for several years after, because “religious values” were part of my political identity. I opposed gay marriage long after I left the church (I am very, very sorry), even though without religious motives there is no logic behind such discrimination. As years passed, I grew uncomfortable with the theocratic right and became a libertarian, but even that wasn’t far enough from the religious right for me. Today it is impossible to separate religion from right-wing politics, creating a community rooted in dueling fantasies of persecution and righteousness with a pasty, white Jesus at the helm. Christianity expressed in culture and in religious movies has nothing to do with faith, decency or alleviating suffering. It’s a bizarre American offshoot best expressed by second-amendment Jesus and cutting food stamps for hungry children.

You can’t judge Christian films like other movies. Any casual examination shows them to be conventionally terrible without exception. But they are not meant to be good, but rather they are designed to deliver pointed messages, spurring audiences to promote and support established political and religious powers. They are vehicles that carry naked threats for people who believe differently and are threatening reminders to keep believers in line. For those opposed to reactionary religion and coercion, it’s important to examine these films to understand the stories this slice of America is telling itself and foisting on the rest of us.

"Left Behind" is the most ambitious and mainstream of recent Christian film offerings. The plot is simple: All “good Christians” and young children (but not teens) are whisked up to Heaven, leaving the vast majority of the planet to riot, panic and self destruct. The movie focuses on a small group of people on an airplane, led by a pilot played by “A-list actor Nicolas Cage” (feel free to substitute your own characterization here). Cage must pilot and land the plane through a series of unrealistic complications, while simultaneously grappling with religious skepticism. There is a subplot with his daughter but the implausible plane ride is the scaffolding of the film.

Like so much of white America, the film comically fumbles with American diversity. There is an African American woman, a journalist, a junkie, a little person and a devout Muslim. It’s a juvenile and clumsy attempt to reflect real America that only serves to highlight the insular, monochromatic and artificial makeup of conservative America.

The mechanics of the movie work as an apocalyptic suspense film, a well worn Hollywood trope. Stories about disasters, plagues or environmental calamity will always be popular, but the difference between "Left Behind" and other disaster films is that no one (of right mind) craves the end of the world through asteroid or zombie attack, while many Christian film goers honestly crave the end of the world. They are waiting, predicting and reading signs, because they think themselves immune to the suffering that they fervently believe awaits their fellow humans. Christians make up 2.5 billion out of a total of just over 7 billion of the earth’s population at this moment (estimates vary). This emphasis on mass punishment of non-Christians makes "Left Behind" nothing more than a planetary-sized snuff film.

The most offensive part of the show by far is the Muslim who is “left behind” despite his faith and love for god. The character is the kind of moderate Muslim that even American Christians could accept. He has all the right traits to join the rapture, but he must pay for the unforgivable crime of being born into the wrong culture. I can give "Left Behind" a pass for condemning heathens like me, but the treatment of this otherwise religious and devout character exposes the fundamental, uncompromising and fatal flaw of extreme sectarian religion.

The golden age of Christian film began (arguably) with the global success of "The Passion of the Christ" made by notable anti-semite and widely acknowledged lunatic, Mel Gibson. The message of this granddaddy of religious films is of course that “Jews killed Christ.” The message behind the film is offensive enough, but it spawned imitators that are still racing to find their lowest point.

In "God’s Not Dead" released in March, the core message is that education is both evil and dangerous and that all answers are contained in the Bible. This is a common theme for fundamentalists, one that does a great deal to keep people uninformed and afraid. I found God’s Not Dead to be the most unbelievable, two-dimensional and downright offensive of all the films I reviewed, descending to the level of self-parody by the second act.

Many of the films I reviewed shared troubling traits. Liberals are comically stereotyped as vegetarians or “god-hating” college professors. Serious journalism is suspect, and secular people are all outlandish cardboard cutouts, less human than disembodied twirling mustaches of absolute evil. When religionists reduce critics to banal caricature in order to defeat them on film, it betrays a lack of confidence in their own arguments.

Every single film I reviewed features some variation of the Christian persecution complex. No serious person can argue Christians are really persecuted in America. It is anti-factual. Every president has been a Christian as is 95% of congress. Religious denominations pay no taxes and are over-exalted (I argue) in our society. There are religious wars waged across the globe, no question, but Christians sit atop of the pig pile in America. The “war on Christianity narrative” is a wholesale fabrication that injects religious strife into a country founded on actual religious freedom.

The danger with this recurring and false persecution narrative is that it takes away from the real suffering of actual people. An excellent (but depressing) essay by Alex Morris in Rolling Stone details the suffering of homeless gay youths who, because of their sexuality, are shunned and cast out of religious families. Morris quotes:

"People ask me all the time if I hate my parents for everything they've put me through, but I really don't. If anything, I just feel sad for them because I'm sure it hurts so bad to have chosen their religious values over their child.” – Jackie

Discarding your children over sexuality is what persecution really looks like. I have never heard a case of a liberal family throwing a born-again Christian teenager into the street.

It is important to note that not all Christians believe the warped ideology or hostility expressed in Christian moviemaking. My father-in-law, David Ashton, is a retired professor of religion and a current Christian pastor. He often calls me out when I try to lump all Christians together.

“We don’t believe that billions of people are going to be tortured in hell,” David told me recently. His is a mature faith, based on reason, self examination and even doubt. He seems as exasperated with the religious right as I am. For me they are a never-ending source of essay fodder but for my father in law, they have hijacked and twisted his deepest beliefs. Religion and non-religion can only live together if we acknowledge each other’s fundamental humanity and right to exist. Even though I’m an atheist, I can see a place in society for faith communities built on kindness and mutual understanding. This kind of community is not the face of American Christianity nor do you ever see this message in any Christian film.

The people who create and consume Christian film are neither mature nor reflective. They are at their core superstitious, afraid and tribal. They self-identify overwhelmingly Republican and shout about “moochers” while vilifying the poor. They violate the teachings and very essence of their own “savior” while deriving almost sexual pleasure from the fictional suffering of atheists, Muslims, Buddhists, Wiccans, Hindus, and even liberal Christians. To top it all off, the stories they tell themselves are borderline psychotic.

The fundamentalist community will continue to shrink until they start telling themselves—and those they hope to win over—more honest and humane stories. The Pew Forum on Religious Identification shows fundamentalism profoundly losing ground with the next generation. Christian film with its cardboard characters and heavy-handed messages will only drive an increasingly diverse and media-savvy populace away. Failing a profound change of heart, the best this community can hope for are films so bad no one will bother to watch them.