Chuck Todd, the Disqualifier: When journalists borrow from the flack's lexicon 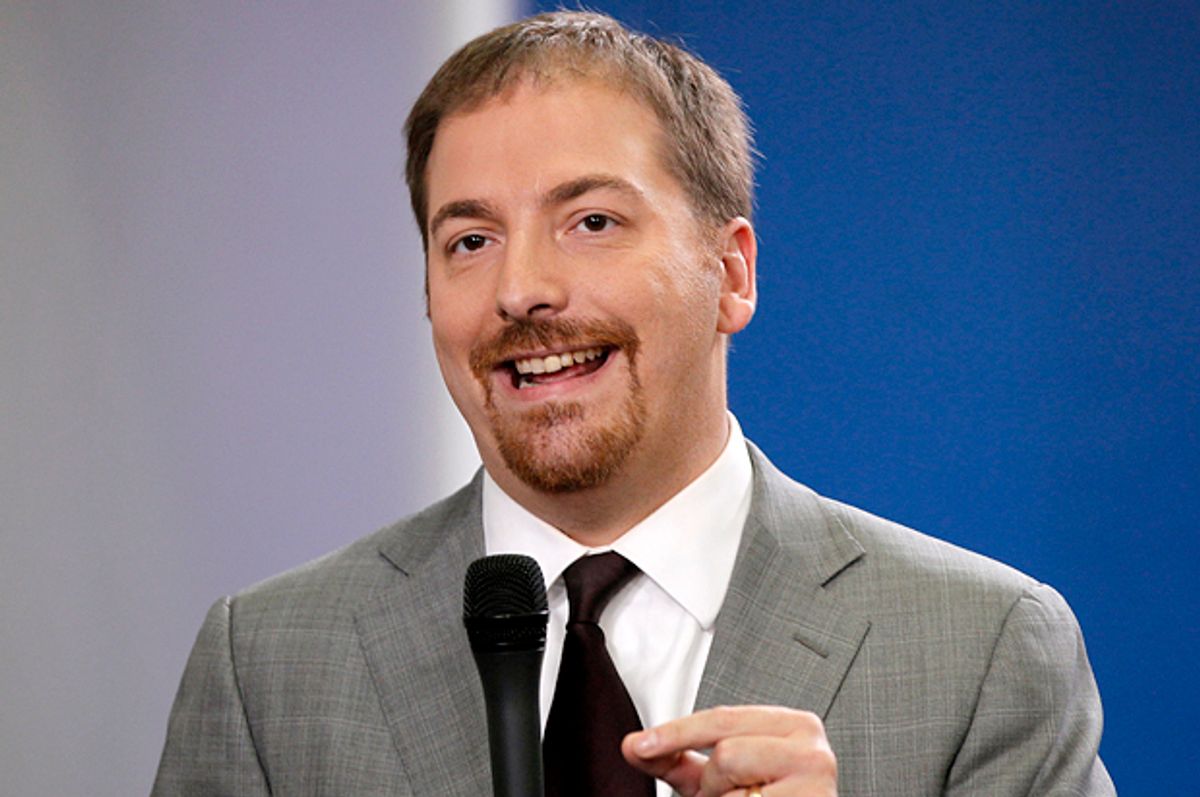 A key figure has emerged in the Kentucky Senate race: Chuck Todd, the new moderator of NBC's "Meet the Press." Now is this where Chuck Todd belongs?

Last week, the Courier-Journal posted footage of their editorial board's interview with Democratic Senate candidate Alison Lundergan Grimes. In one extremely awkward exchange, Grimes was asked three times if she voted for President Obama in 2008 and 2012, and three times she refused to answer. It was most embarrassing, arguably the nadir of an overly protective, defensive campaign.

Our man Chuck Todd had a whole other word for it on last Friday's "Morning Joe," though: disqualifying.

"And Kentuckians expect her to cast a tough vote on anything? Is she ever gonna answer a tough question on anything?" Todd asked, incredulously, after viewing the clip.

"You wanna be a U.S. senator? If you can't find a way to stand behind your party's president ... you can disagree with him but you can't answer a basic question and you come across looking that ridiculous?

"I think she disqualified herself," he added.

A harshly rendered verdict from NBC News' top political man. And sure enough, Todd's soundbite -- "I think she disqualified herself" -- now serves as the lynchpin to a new Mitch McConnell ad, "Disqualified."

Todd is a media figure who works tirelessly -- a little too hard, often -- to appear neutral in political disputes. He is probably not happy to be serving as an unsolicited surrogate for the Mitch McConnell campaign right now. Or he is happy, because it makes him look good to conservatives, and mainstream media figures always love getting good marks from those who are suspicious of the liberal media. Could feel either way. It doesn't matter, anyway, because he said it, and the clip of him saying it will probably appear on more Kentucky television sets than the original clip of the Grimes flub.

Chuck Todd never explains how Grimes "disqualified herself" by dodging this question, though. Did she drop out of the race and ask for her name to be stricken from the ballot? By dodging the question, did she cast a spell on herself that reverse-aged her to be ineligible for service in the U.S. Senate? Did her incantation strike names from her ballot petitions, putting her below the threshold to qualify for ballot placement? Or is it some other qualification for federal office that, in refusing to say whom she voted for in the last two presidential elections, she broke. We haven't combed through the entire election code for some other subsection that her comments violated, but we'd guess that there's nothing there.

Yes, I'm familiar with the art of metaphor. But this is a dumb thing that people say all the time when they talk about politics. This gaffe or that slip-up or that bad vote or whatever "disqualifies" someone. Or, in exasperated rhetorical question form, How does [politician I don't like doing something] not disqualify him/her from office? This is flack-talk. Flacks are the only people who can get away with this sort of language. They are paid to "spin" things and pretend to emote. Everyone else, especially journalists, left and right, should aspire not to sound like flacks.

Whether Grimes' comment "disqualifies" her from holding office will be determined by individual Kentucky voters on November 4. Some voters will find Grimes' dodge so bad that they either stay home or vote for Mitch McConnell. Other voters will vote for Grimes anyway because they would prefer that she serve Kentucky as a senator instead of Mitch McConnell. Similarly, it is not up to Rand Paul to determine whether Benghazi disqualifies Hillary Clinton from holding public office again. He and others who feel the same way may vote against her. Those who don't feel that Hillary Clinton's handling of the Benghazi situation precludes her from serving as president can vote for her, or against her for some other reason. Every person can vote however they want, based on the significance that that person applies to various statements, positions, gaffes, debate performances, whatever.

To say that something "disqualifies" a politician from office when it doesn't makes for arrogant and short-sighted commentary. You could argue that Todd's comment should "disqualify" him from political punditry to make an emphatic point, but of course it shouldn't. There's no law barring cable news from letting people say dumb shit on the air. Obviously.