Your infant is not a "stud muffin": Why do we insist on sexifying babies?

Gwen Stefani has outfitted her 8-month-old with a "stud" pacifier, and he's not the only foxy baby in town 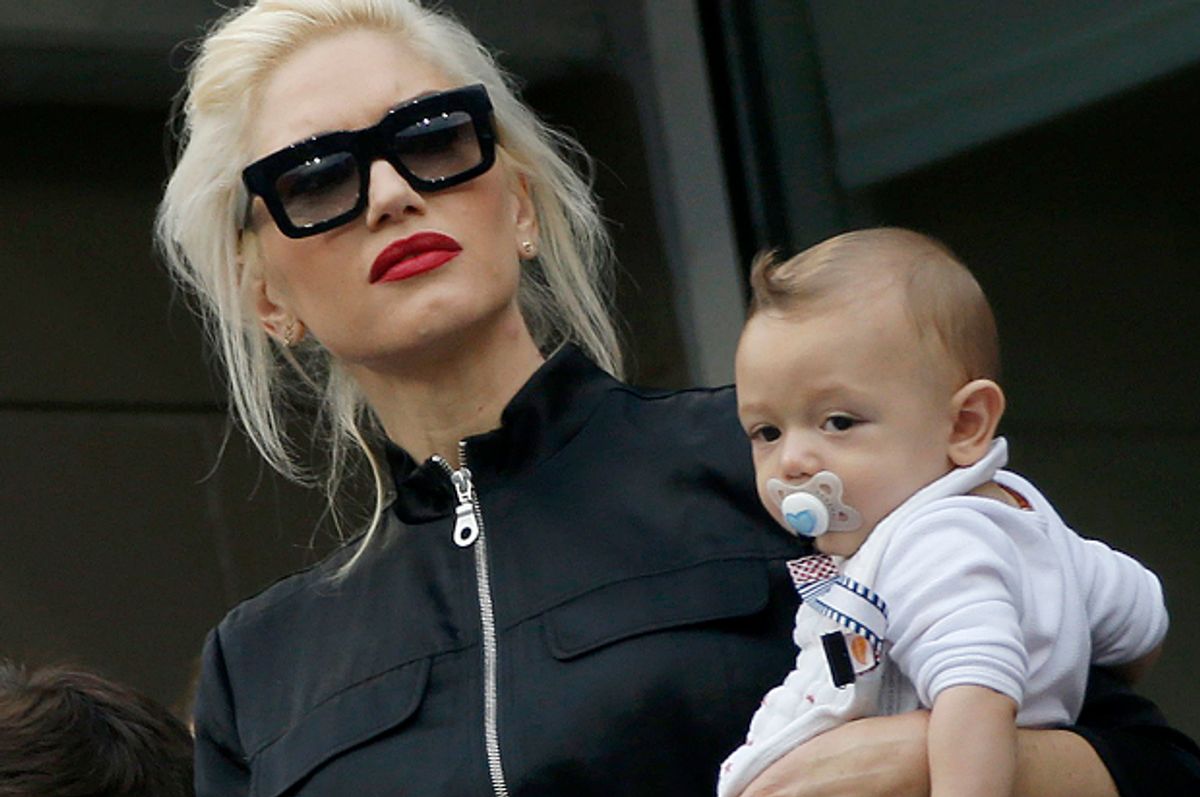 It's happening: we're even sexifying babies now. Just earlier this year, two parents started a petition against sexualized pacifiers sold at Target: one reading "flirt," another with a pouty lipstick smooch on it. By now, we are all hopefully well-versed in the many ways that girls are sexualized from infancy -- from baby high-heels to padded bikinis for 7-year-olds to flirty thongs for pre-teens. That's just the apparel, not to mention the hyper-feminized toys -- the dolls, the makeup and, oh god, don't get me started.

The "stud" pacifier is a welcome reminder that, while girls get the brunt of it, we sexualize boys too. Ever overheard someone refer to an infant as a "ladies' man" just because he seems more at ease with women? Gosh, it couldn't just be a developmental phase or a result of being taught that women are caretakers! Has to be evidence of his burgeoning heterosexuality, his inherent manliness. And I can't even with the "I love boobies," "Hung like a 5-year-old" and "I'm too sexy for my onesie" onesies. Seeing this latest entrant to the world of creepy baby accouterments, I had to ask: Why do we do this?

"I guess people think it’s 'cute' or 'funny' to put 'stud muffin' on a pacifier or high heels on a baby girl because it seems incongruous and ridiculous," said Peggy Orenstein, author of "Cinderella Ate My Daughter: Dispatches from the Frontlines of the New Girlie-Girl Culture." "But for one thing, it’s treating your baby like an object, not like a person, so you have to question that right there." That brings to mind the Pinterest, "My Imaginary Well-Dressed Toddler Daughter," which brilliantly lampoons the tendency of hipster parents to dress their kids like they're starring in an Anthropologie or Urban Outfitters ad. It isn't sexualized, per se, but it does get at the same idea of treating children as fashionable parental accessories.

Orenstein adds, "I think people don’t get the connections between those [joke] items and the sexualized items they’re giving their 3-year-olds and their 5-year-olds." Nor do they make the connection to what she calls "the larger culture of sexualized childhood." "These constant sexualized images, these constant images that polarize boys and girls and define them through warped sexual roles, this constant bombardment from birth now, are truly robbing children of their childhood, of their natural sexual development, of this precious time when they can just be kids," she argues.

There's no need to take her word for it. "There’s just buckets of research at this point showing the harm," she said (see: here, here and here, for starters.) "Honestly, I think the biggest job of today’s parents, the one that is the most surprising, is the need to protect their child’s childhood from sexualization, from predatory marketers, from the pressure to turn your child into an object or a product. Making space for your kid to be a kid, making space for natural development, making space for creativity that isn’t hooked to the commercial culture to flourish."

It isn't hard to find concrete examples of what childhood can look like without these sexualizing influences. When Orenstein recently watched the documentary, "I Am Eleven,” which interviews 11-year-olds from around the world, she couldn't help but notice a stark difference between kids in the U.S. and in developing countries. "The first world kids were so individualistic, so focused on fame, romance, materialism, self-interest," she said. "They were wearing eye makeup and chandelier earrings. They wanted to be actors or pop stars. The developing world kids, even though they obviously were poor and had limited opportunities and all kinds of hardship, were also more community-minded, spent more time outside, had no interest in sex or romance, wanted to grow up and help others: they were actual children."

None of this is to suggest that babies aren't sexual beings. Infants explore their bodies. Children play doctor or "show me yours, I'll show you mine." There is nothing abnormal or weird or creepy about any of that. Ironically, though, that reality becomes virtually unutterable in large part because we joke of babies being "studs" and "flirts." If we didn't project adult sexuality onto kids, it wouldn't be so difficult to acknowledge that sexuality is normal. Note that there's a key difference between being sexual and being sexualized. We like to deny that children are the former while we make them the former, mapping our own adult sexuality -- and insecurity and anxiety and neuroses -- onto them. So to the Gwen Stefanis of the world: Your baby is cute, but he definitely isn't a stud.