The franchise may be a cultural staple, but Esquire's provided a useful primer in how not to do it 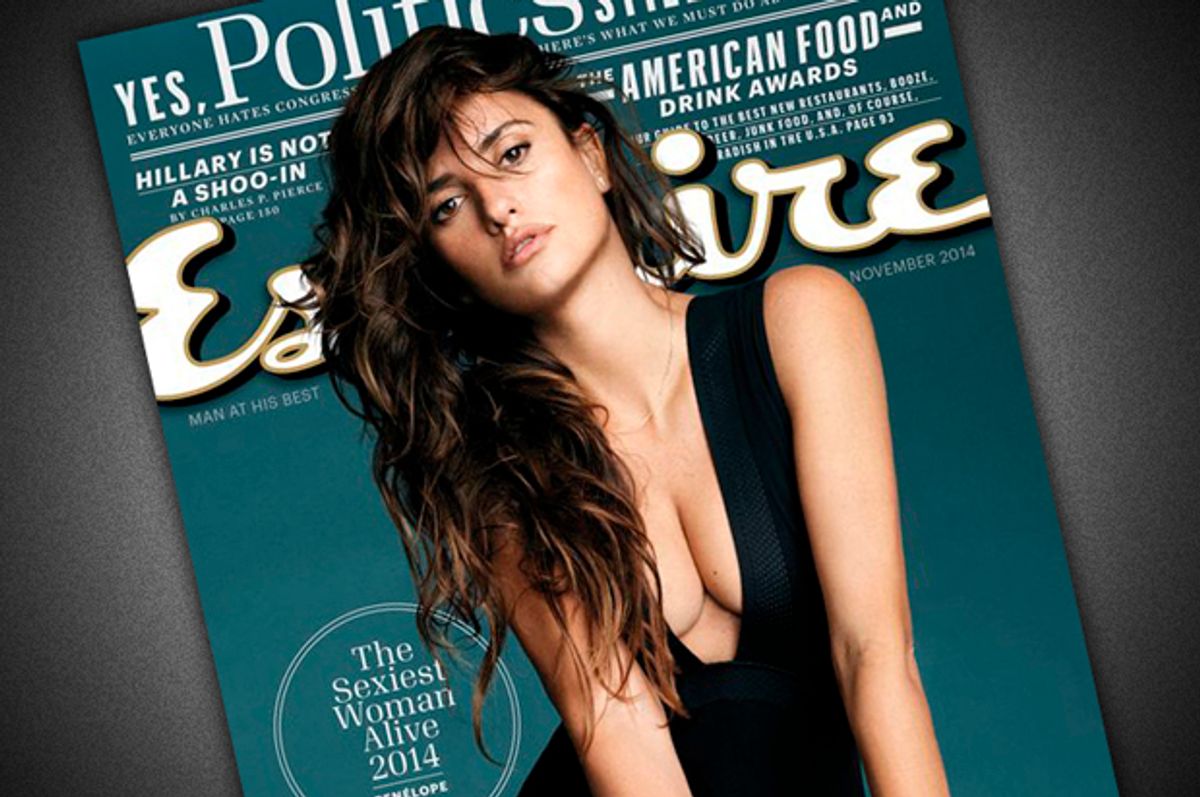 “If you want to feel like the world’s most judged man, sit down at a table in a restaurant with the Sexiest Woman alive,” writes Chris Jones in his profile of a bullfighting match Penelope Cruz in the November issue of Esquire. There’s no doubt that Cruz, the titular honoree, is beautiful, incandescently so, but it’s a little ironic—and by ironic, I mean kind of tone-deaf—that Jones feels so self-conscious about the assignment. After all, the “sexiest woman alive” franchise has been a staple of magazinedom for decades.

In the parlance of the magazine industry, Esquire falls short of what’s called a “lad mag,” the British-born term for glossies like Maxim, Gear, Loaded, and FHM that are more or less the paper version of a frat bro doing a keg stand. Esquire, like its newsstand brother GQ, is no less enamored of hegemonic masculinity, but goes about it in a more self-consciously chummy, upwardly-mobile way. One of the magazine’s regular features is “A Funny Joke From a Beautiful Woman,” which asks up-and-coming Hollywood starlets to crack wise while also posing in underwear, the ultimate nod to cool-girl élan. And the Sexiest Woman Alive has been an Esquire feature issue since 2004; previously, it was part of the annual Women We Love issue, itself a tradition that kicked off in 1987.

Past SWAs have included inaugural winner Angelina Jolie (2004: “In the course of the evening, she will allow me to moisten the tip of my finger with my tongue and try to wipe off the makeup, under which had once been written BILLY BOB.”), Rihanna (2011: “She grabs her own radiant ass — she handles it, offers it — like it's a rump roast.”), and Sexiest Woman two-timer Scarlett Johansson (in 2006 and 2013: “She looks like a woman. She exudes womanness.”). In the issues preceding the announcement of the SWA, photographs of disembodied parts of the chosen one—an ankle one month, some sideboob the next—are teased to readers: Can you guess the sexiest woman alive by pictures of body parts conveniently presented for your consumption? For the wagering type, there’s even “Sexiest Woman Alive Madness,” a monthlong bracket in which lucky ladies from categories like “Television” and “Music and Fashion” and “Sports” are advanced in a battle royale from which only one will emerge victorious.

The judgment of women—their bodies, their faces, the fleshy and bony and waxed and colored components of each, as well as their voices and manners, their appetites and clothing choices—is not specific to Esquire, but the province of a unisex spectrum of media. One could theorize, really, that it’s the baseline raison d’etre of much of media itself: the phenomenon of selfies and Ask.fm, the premise of game shows like Hot or Not? and tabloid-magazine staples like “Who Wore It Better?”, the bread and butter of The Bachelor and Real Housewives franchises, and, while we’re at it, the entire E! network.

What sets Esquire’s Sexiest Woman Alive stakes apart is how emphatically the magazine wants to be something other than, well, a magazine that judges women, and the often inadvertantly comical ways this manifests. And that brings us to the ludicrous piece on Cruz, which is presented oh-so-artfully, almost after the fact, as intercuts in a long disquisition on a bullfight in Madrid.

This would be cringeworthy enough—yes, Cruz is Spanish and so are bullfights, but you really don’t have to stop there, celebrity journalists, you really don’t—and it gets worse. Jones is laboring under the first law of men’s-mag journalism about women, which is that wordy rumination on a macho subject like bulls or beer or leather will give depth to what would otherwise be summed up as “Mmm, boobs.” (The accompanying photos of actual boobs will eventually give the game away.) It seems certain that Jones thinks there’s something super-deep in contrasting his florid descriptions of the bull’s death (“The blade missed the bull’s spine but found its heart”) with those of Cruz polishing off a bone-in rib-eye steak (“She picks her splattered white napkin off her lap and rises from her chair. All that remains on her plate is a bone and a puddle of blood”). One can almost picture him, gleeful over his laptop, murmuring, “You think I’m comparing Penelope Cruz to the bull, but ha-ha, motherfuckers, she’s the matador!”

The gimmick is a double-down of self-conscious celebrity smarminess. In SWA terms, Jones is in good company there: In 2007, the feature was styled as a screenplay starring honoree Charlize Theron and interviewer Tom Chiarella, who makes his slightly nebbishy nervousness and his insistence that the interview not be conducted at the Chateau Marmont the focus of the story. In 2009, the year of Kate Beckinsale, Chiarella worries about his masculinity in the face of the buff action heroine, which is compounded when they meet at “one of those places where women meet other women for lunch.” In the course of the interview, he asks her to punch him. She refuses.

That so many SWA profiles vibrate with this kind of gender anxiety reflects, possibly, the inexorably changed identity of Esquire itself. The magazine was once an elite property among New York’s smart set; its closest competitors were The New Yorker and Vanity Fair, rather than Details and Maxim. It was also, interestingly, one of the first mainstream magazines to give voice to the second wave of feminism: Gloria Steinem penned pieces for the magazine on contraception and work-family balance; Germaine Greer appeared on the cover in 1971, cradled Fay Wray-style in the arms of an ape-suited Norman Mailer. And, as Carol Polsgrove notes in the 1995 book “It Wasn’t Pretty, Folks But Didn’t We Have Fun? Esquire in the Sixties,” in 1973 the magazine devoted a special issue to the women’s movement that included a mea culpa for the magazine’s “perfectly rotten attitude toward women.” Such past offenses were brushed off on “a different set of editors…a long time ago.”

Like People’s annual “Most Beautiful People” issue and Rolling Stone’s “Hot List,” Esquire is codifying sexiness, rather than quantifying it, and tweaking the routine trajectory of celebrity PR in a way that aids its own brand. Like all the celebrities that have come to replace working models on magazine covers, Esquire’s have timely projects to push (in Cruz’s case, two upcoming movies) and philanthropic goals to raise awareness and money for. It’s no accident that the advent of the Sexiest Woman Alive issue was in 2004, when mainstream magazines and their ad dollars were first seeing the shadows of the digital revolution transmogrify into actual newsstand threats. With print still in peril, sales success and nuance—particularly when it comes to gender roles—seem ever more inversely proportional.

And in a time when the celebrities who value their privacy, like Cruz, are increasingly on guard, turning rote profiles into grabby stories isn’t always easy. As Buzzfeed writer and Doctor of Celebrity Gossip Anne Helen Peterson noted in a Storify of tweets about the Cruz interview yesterday, Jones was likely granted 20 minutes or so with Cruz. “He had to make something of it, somehow — and the only way to do that is to rely on platitude, often sexist ones,” Peterson wrote. Compare a woman to an animal and/or a cut of meat while bowing to the power of her beauty, throw a little cultural reductiveness in there—Jones probably felt like he nailed it. In the end, though, the Cruz profile is not just a story about a beautiful woman who makes the writer worry about how he measures up as a man; it’s also the story of a magazine grasping for eyeballs, trying to balance the one thing it knows will always be marketable (boobies!) with a resistance to the very idea of marketable (bull blood, I guess?).

Furthermore, the choice of Cruz is notable, if not unexpected, in the wake of “In Praise of the 42-Year-Old Woman,” written by Tom Junod and published by Esquire this past summer; the now-notorious essay asserted that “men”—namely, the 56-year-old Junod, and Hollywood, sometimes—are now cool with sexualizing women who are the precise age of 42. The article kicked off by noting that “Let's face it: There used to be something tragic about even the most beautiful forty-two-year-old woman,” and went on to celebrate the suddenly exciting age shared by, among others, Sofia Vergara, Leslie Mann, Cameron Diaz, Carla Gugino, Jennifer Garner, and Maya Rudolph.

Given the media buzz around of Junod’s new appreciation of women of a certain age, crowning a 24-year-old slip of a thing Sexiest Woman Alive really wouldn’t be the move right now. And though the 40-year-old Cruz has two years to go before hitting Junodian peak older-lady sexiness, it’s a safe choice to celebrate her now: By the time she hits 42, Esquire may well have decided that women of that age are back to being tragic.

Would Esquire be better if it dispensed with the literary pretensions it employs when writing about the women whose legs, breasts, and other parts it presents to readers in neatly apportioned parcels? Would it be more appealing if the writers just came out and wrote, “The main thing of interest about this woman is that she’s an object that I would like to bone”? Probably not. After all, Maxim still exists for just that reason. But a heads up to Esquire: You can celebrate a woman’s sexiness in ways that don’t involve comparing her to meat.