Inside the cage: This book blows the lid off the world of mixed martial arts

Kerry Howley's gripping, poetic account of the lives of MMA fighters is like nothing you've ever read 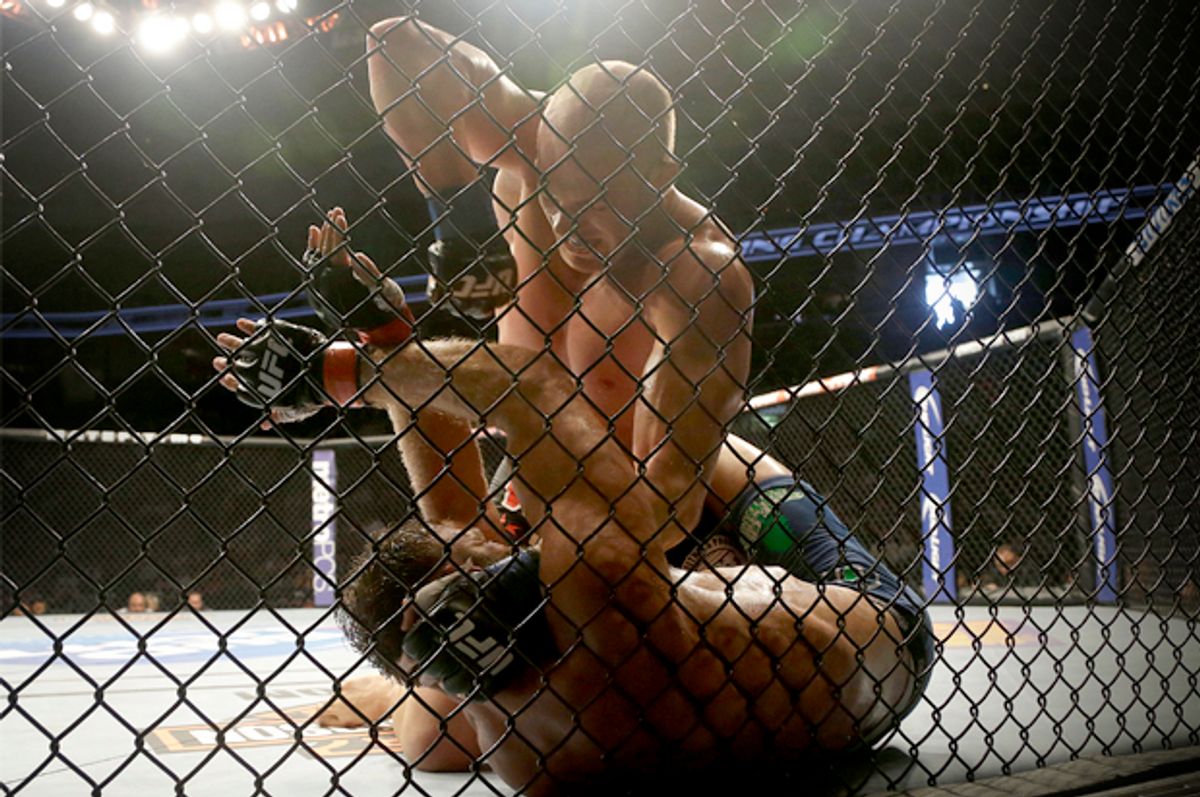 Every time I am in an airport and feel a little flush, cash-wise, or loose, beers-wise, I treat myself to a bag of gummy bears and a pile of magazines so glossy they barely stay piled on the bar.  This ritual costs me a lot in material terms, since two or three magazines is often well over twenty dollars (plus the beers, plus the bears, etc.), but the spiritual costs are even higher.  The shopworn glamor of certain gentleman’s publications that were once bulwarks of the American literary establishment sparkles enough--and the writing and topics of the corresponding ladies’ publications are usually insulting enough--that my Hudson News purchase often occasions a real moral struggle, as I decide whether I can reasonably spend seven dollars on a portfolio of Emily Ratajowski’s oiled breasts just to read the articles inside.

I usually feel depressed again after I’ve made the purchase, when I read a riveting story by a great writer--someone like John Jeremiah Sullivan, someone who is usually a man--on some topic that I might never otherwise be exposed to or interested in, like ice luging or shad planking or cage fighting. And I usually think “Fuck this” about all of it--the breasts, the American literary establishment, the money I spent (by now I am on the plane, and drunk).

So when I heard about a book about cage fighting (“Thrown”), by a woman (Kerry Howley) with just as fine a literary pedigree as John Jeremiah Sullivan (Iowa), a book described as “literary nonfiction” with nary a breast on its cover, I knew I had to read it.  And I began reading it, and I nearly said “Fuck this” again, more out of bewilderment than anything else, because at first I truly didn’t understand what it was that I was reading. “Thrown” is, to adopt a sporting term, in a real class of its own.  But once I got over my shock, I was mesmerized.

I had expected an extended gonzo riff about punching by a spunky newsroom gal, and instead my narrator was some kind of verbose, floundering philosophy student, whose story begins when she wanders away from a conference on phenomenology where a “balding professor stunningly wrong about Husserlian intentionality dominated the postconference cocktail hour.” This narrator, “Kit,” follows “a group of young men who had fragranced themselves such that [she] was sure their evening had some immediate purpose,” only to stumble into a mixed martial arts (MMA) fight, one that causes her to declaim that “this exhibition, whatever it may be, has ushered ecstatic experience back into the world,” and which subsequently becomes “the only phenomenological project that could possibly hold interest…”  She then embarks upon a years-long career as a chronicler and “spacetaker” for these fighters--sitting close while they eat pizzas “covered in ground beef and cream cheese,” and waiting in a kind of patience desperation for her next glimpse of ecstasy.

You can see why I was startled, at least.

I eventually realized, or think I realized, that the floundering philosophy student is only sort of real.  She addresses this 65 pages in: “I stand before you every bit as fictional as longitude and latitude, as the Roman calendar, as the sixty-second minute, and I encourage you to dispose with all of these to the extent that they offend you.”  But the stories of the fighters this phantom philosopher is telling--the men whose bludgeoning will deliver her the “ecstatic experience” she seeks--are very real.  Sean Huffman, Erik Koch, his brother Keoni--these are very real MMA fighters from the midwestern US, and Howe spent years carefully documenting the very different trajectories of their careers.

What “Thrown” finally reminded me of were not the bold, gonzo pieces of America’s best mainstream magazines, but some of the boldest voices of twentieth-century fiction.  The nearly hysterical circumlocutory gymnastics of the narrator, and her dual position as a predator and supplicant to her fighters, reminded me of nothing so much as Humbert Humbert, with immense cauliflower-eared men in the startling role of Lolita. Here’s Kit on Sean, her first nymphet: “I feel pulled toward Sean with the painful, pathetic gratitude of a person who knows herself to be incurring a debt she’ll never discharge...I can see our future clearly now, a trimmer Sean, bigger fights, the two of us thrown together into an exalted dissolution each time he elects to take us there.”  Later, after Sean has proven himself something of an earthbound loser, Erik Koch becomes the focus: “I followed Erik back to Milwaukee, unafraid...I wanted to sing with him in the car, hold his lotion in the tanning salon, eat what fast food he could not and leave the wrapper wafting in his direction.”

There are other sinister shades floating through Howley’s account. In Kit I heard Oskar Matzerath, Gunter Grass's perverse protagonist in “The Tin Drum,” Kit’s fighters like his Bruno Munsterberg, who is sidekick, minder, and butt while the demented Oskar is in the mental hospital.  Kit’s baroque prose reminded me of a recent book, Dennis Cooper’s “Marbled Swarm,” the title of which refers to the mannered style of speech of its murderous narrator. At the very end of “Thrown,” when Kit spies a new fighter, an undefeated pretty boy from Cleveland, Texas, I thought of John Fowles’s serial killer narrator in “The Collector,” who finishes off his hostage and identifies his next victim.

As in these fictional narratives, “Thrown” plays with currents of elitism, intellectual imbalance, even perversion: “A preference for questionable and terrifying things,” Kit quotes Nietzsche, “is a symptom of strength.”  In echoing these kinds of narrators and relationships, Howley manages to call into question the whole journalistic enterprise. Kit compares the writhing of the fighters to the ecstatic rites of a “fourteenth-century Latvian,” a “nineteenth-century Paiute Indian, a Maenad, but the crucial difference is that these antecedents were both the seekers and the makers of their own ecstasy, whereas Kit needs the fighters as her proxies; only they will enter the cage and get their faces beaten flat so that she can achieve higher ground.

Howley seems keenly aware of this, and teases out the inherent weirdness of the writer-fighter dynamic throughout the text, rendered additionally weird because she is a woman, and the fighters are men.  After a prolonged period of silence from Erik Koch, the ascendant of her fighters, Kit finally tracks him to a fight in Milwaukee, where she embraces him in front a room full of spectators: “My moment of embarrassment had already transformed into a glow of pride. The entire room had seen that I was his, and he mine.”  (There are still some problems, namely that these are real men, real men with whom Howley must have worked very closely. Not to be elitist myself, but it is difficult to imagine how, exactly, she explained her project to its subjects.

In one moment of “Thrown,” a reporter asks Kit who she is: “‘Well, it’s complicated,’ I said, glancing at Erik, who looked somewhere between skeptical and annoyed by this answer. I panicked. ‘I write for the Cedar Rapids Gazette.”  I often wondered how Howley herself navigated the space between her high-flown narrator, her own Iowa and Paris Review pedigree, and her subjects, men who receive text messages from the mother of their children reading “Hell no ur just a sperm donor” or “Need $50 fr [sic] food.”)

Don’t imagine that Howley’s book is all shades of literature’s great twisted minds.  It is also a truly gripping account of the insular world of MMA—the history, the personalities, the injuries, the money, the white-hot fighters and the foundering ones.  Howley’s blow-by-blow accounts of the fights are just as, if not more, compelling than those of “the class of men who regularly desecrate sacred encounters in the form of what is called ‘sports writing’” (Kit’s words, not mine).

I don’t want to be combative, to make Howley’s extraordinary book some victory in a protracted battle of the sexes. But I found it incredibly bracing, and, remembering all my depressed airport afternoons, proud-making in some strange way.  Howley stepped into the cage and stepped out of it with something new and stunning. As Kit puts it in one of her MMA origin stories, “How quickly some men, by the force and purity of their vision, can turn a mere activity into a kind of institution.”  How quickly some women do the same, and how gratifying to be a spectator.