Republicans tried to reach women, young voters with fancy ads. Trouble is, Oliver, Stewart and Colbert saw them too 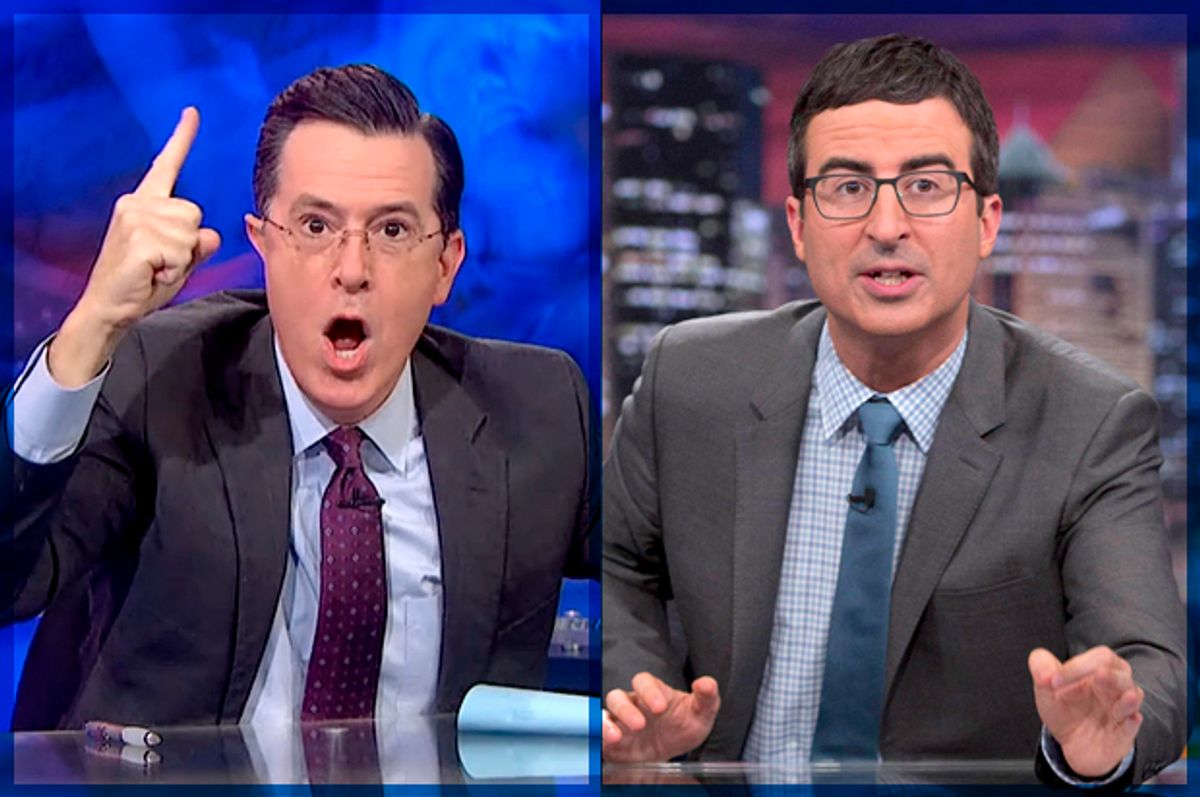 It’s widely known that the Republican Party has a demographic problem.  The GOP is decidedly unappealing to millennials, women and people of color. Despite creative efforts to redistrict and despite pushing rules that limit the population’s ability to cast a vote, it remains true that these voters will likely pose a real challenge to GOP hopes in the midterm elections. Rather than rethink their stance on political issues that turns off these voters, the GOP decided to address the problem by creating a series of ads meant to help show these groups that they should be Republicans too.  The point they have tried to make is, if you really knew what it means to be Republican, you would be one too.

The fact that the GOP decided to try to turn around voter patterns by simply rebranding, rather than addressing voter concerns, gave satirical comedians an entertaining opportunity to expose the flaws in this strategy.  More than simple mockery, the satire of these ads has helped citizens understand the faulty logic to the very idea of GOP rebranding.  And it has done so in a way that reminds citizens what’s at stake in the upcoming elections.

John Oliver reminds millennials that Republicans are not cool

Millennials, the youngest demographic of voters --aged 18-33 –are distinctly left-leaning.  Overall they are the most liberal segment of our population, and, as Pew reports, “even those Millennials who do identify as Republicans or lean toward the GOP are decidedly less conservative than older Republicans.”

Despite the ongoing assumption that the young in our nation don’t care enough to bother to vote, the GOP has been working hard this election cycle to improve its millennial appeal.  But, rather than attract millennials to the GOP, most of these efforts have backfired, often turning quickly into more opportunities for millennials to mock them.

Over the summer, for instance, we were introduced to a hipster dude with conservative values, who was meant to show millennials that you can be “cool” and conservative. But the campaign fell flat and immediately became the subject of mockery and snark.  One of the best examples was the parody ad done by John Oliver’s team.  It was not just funny, but it also proved that the GOP really doesn’t understand this generation.

Watch the original and the parody here.

The GOP hipster dude was by all accounts a total backfire among millennials. Gawker even ran a piece on the ads called “The "GOP Hipster" Is a Pampered Babbling Sack of Horse Hockey.”  If anything the ads confirmed to millennials that Republicans were totally clueless about their generation, but that that didn’t stop the GOP strategists from chugging on to their next needed demographic: women.

Let’s try to understand what the concept was here.  We start with a party known for demeaning women and the plan to convince them that is not true is to portray them as not just vapid, but also dependent on men for their identity.  Seriously?

It gets worse.  They also ran an ad called “Dating Profile” that takes GOP disrespect for women to new heights. In it a woman explains her relationship with Barack Obama as though they had been dating and he lied to her.  She can’t take the lies and false promises anymore so now she wants to end the relationship.

In order to highlight the embedded sexism in these ads, Jon Stewart called in "The Daily Show’s" Senior Women's Issues Correspondent Kristen Schaal to satirically describe the faulty logic to this ad campaign.  Exaggerating the girliness projected in the ads, Schaal explains, "Women don't see candidates as potential leaders, we see them as possible soul mates and Republicans are finally running ads to reflect that."  Highlighting the outrageous inability of Republicans to take women voters seriously she pointed out that wedding-themed reality show homages and faux dating site commercials are “totally the way to a woman's heart” — or brains, as Republicans have discovered: "Science shows that this part right here is devoted to thinking about relationships," she says, pointing to most of her head, "and this small part here is bitchiness."

Colbert comes out as a Republican

As if the failed efforts to attract millennials and women to vote for the Republican ticket were not humiliating enough to the party, another strategy was to simply make Republicans seem human.  An on-line marketing campaign that featured an ad showing a diverse array of people who were purportedly Republican was launched in late September in connection with the twitter hashtag #IAmARepublican.

Featuring a series of images including women of color, men who drive Priuses, and men who put together Ikea furniture, the ad tried to suggest that Republicans are average people who are not, actually, all rich white men.  In an effort to expand the base of the party, the idea was to have Republicans then tweet about themselves using the newly crafted hashtag - #IAmARepublican.  But as The Daily Banter reported, there is nothing more ill conceived than a social media push launched by people who don’t get social media.  They reported that the hashtag “functioned as it was supposed to for all of maybe 48 hours before being hijacked and turned into one big flying snark bomb.”  What do the snarky tweets reveal?  They overwhelmingly reveal a public perception of Republicans as selfish, racist, sexist, gun-loving fundamentalists.

Having the hashtag overtaken by millennial snark was not enough for Stephen Colbert, though.  When he went after the ad on his show he first revealed that it was created with a bunch of stock photos—and that many of the actual people in it, were not, in fact, Republicans. The Prius driver for instance? He’s not a Republican; he’s from Sweden.

And that leads Colbert to his best point.  It’s time for all real Republicans to come out of the closet. So Colbert confesses to his fans that, even though he has described himself as a conservative independent, the truth is he is really a Republican. He then asks “all closeted Republicans who are afraid to be themselves” to join him. He then shows a montage of Bill O’Reilly repeatedly calling himself independent.  Colbert’s retort? “Ok girlfriend whatever helps you cry yourself to sleep at night.  We can talk when you’re ready.”  Colbert masterfully reveals the irony that not even O’Reilly will come out as Republican.

The pro Republican PR campaign may be backfiring for the party, but it’s succeeding in offering satirists a chance to expose the deep flaws in Republican politics.  If GOP strategists thought these ads would attract new voters to the party, then what does that tell us about their ability to understand the political interests of major segments of the voting public?   The GOP might not get it, but luckily comedians like Oliver, Stewart, and Colbert do.  Their satire of these ads has revealed the GOP’s idea of rebranding to be nothing more than a joke.