ALEC's new assault on America: Why the far right isn't relying on Congress

While the nation fixates on congressional midterm results, here's what Big Money's front group has its eye on 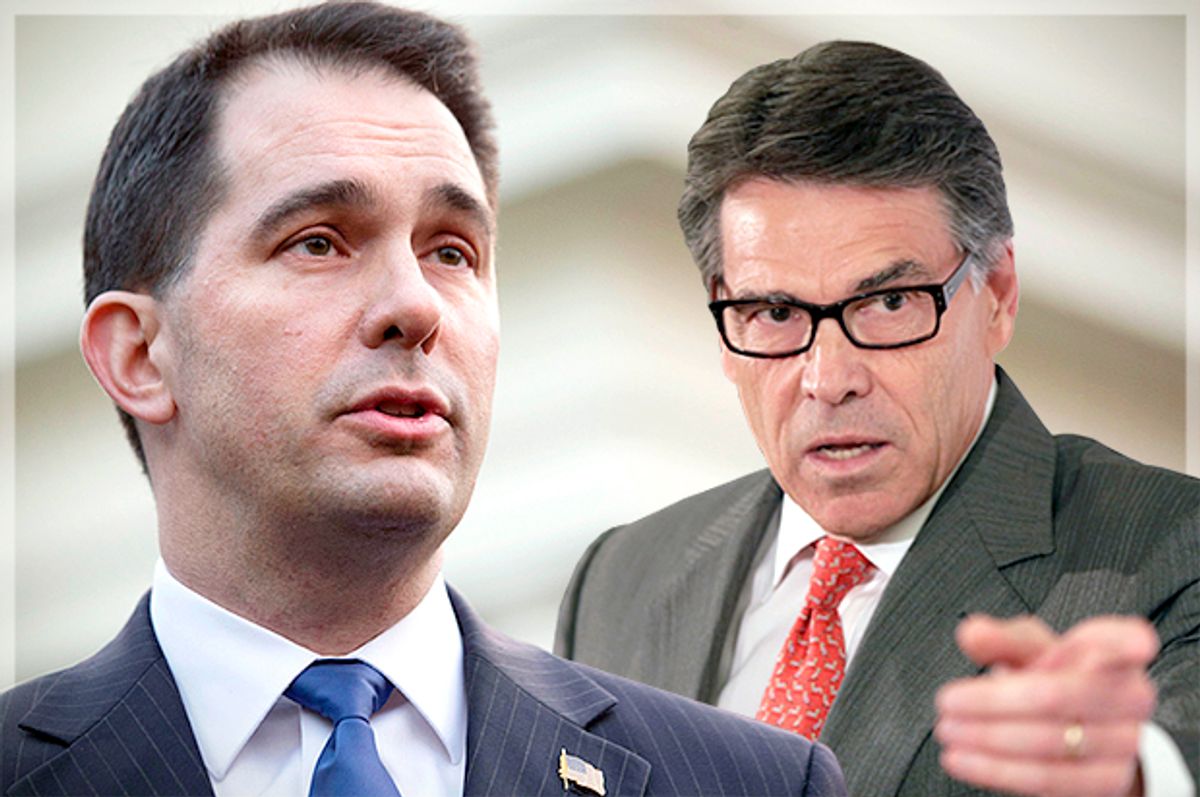 You know it's getting close to an election when every political junkie gets obsessed with polling, and men like Nate Silver and Sam Wang are spoken of in hushed tones usually reserved for sports stars and religious figures. As of today it's not looking good for team D to hold the Senate and there are a lot of reasons why that's a bad thing for America. Not the least of those is that the Republican party has lost its mind and they are likely going to elect some more fringe characters along the lines of Ted Cruz to the allegedly "greatest deliberative body in the world."

I had been of the opinion that this wasn't going to be such a travesty since it's probably going to last only last two years, but the advent of this new ISIS war and the hysteria around immigration and Ebola means that the congress has quite a bit of leverage over the administration and could demand some very ugly concessions just to keep the government working in a time of crisis. (Yes, they will do that, don't kid yourself.) So it's probably a mistake to be sanguine about this election not being important. When the world is blowing up you really need the government to work properly.

As I said,  the field is much more favorable to Democrats in 2016 so there's something to hang on to if the worst happens. But this story from Mother Jones about the continuing rightward turn in the state legislatures is enough to give you nightmares. Republicans already hold total power in 23 states and are about to take control of 2 more. And let's just say they aren't exactly Eisenhower Republicans. Across the country where they've won full control, they've tried to enact as extreme an agenda as they can get away with. And when you have all three branches, as many of them do, the agenda is very extreme indeed.

As we've seen in states like Wisconsin and Michigan, they've decimated public employee unions, Arizona led the way to legalized harassment of anyone who looks "foreign (partially struck down by the Supreme Court), and the constitutional right to abortion has been attacked at every turn, Texas women being the latest casualties. Some of these initiatives, such as Oklahoma's lone brave battle to prohibit the imminent enforcement of Sharia Law in our towns and villages is not taken seriously (although you never know.) But many, such as the NRA's program to flood the nation's streets with guns and ammunition along with the state-by-state GOP strategy to pass laws to suppress the vote of people who are likely to vote Democratic have been hugely successful.

As I mentioned in this piece, the GAO released a study last week showing that these vote suppression laws have succeeded in cutting turnout by several points in some states which could determine the outcome of a close election. The courts have recently stayed a number of vote suppression laws in some states that were implemented so close to the election that they've left the officials unable to properly educate and inform the voters. But there's not a lot of reason to believe that the Supreme Court will revisit its ruling on voter ID any time soon so we can expect this crusade to continue.

You cannot have this discussion without mentioning American Legislative Exchange Council, the Big Money right wing front group that provides these legislators and Governor with "model legislation" they can just dust off and pass without having to do all the unpleasant work involved in writing it yourself. Alecexposed.com explains it this way:

Through the secretive meetings of the American Legislative Exchange Council, corporate lobbyists and state legislators vote as equals on ‘model bills’ to change our rights that often benefit the corporations’ bottom line at public expense. ALEC is a pay-to-play operation where corporations buy a seat and a vote on ‘task forces’ to advance their legislative wish lists and can get a tax break for donations, effectively passing these lobbying costs on to taxpayers.

Participating legislators, overwhelmingly conservative Republicans, then bring those proposals home and introduce them in statehouses across the land as their own brilliant ideas and important public policy innovations—without disclosing that corporations crafted and voted on the bills.

ALEC boasts that it has over 1,000 of these bills introduced by legislative members every year, with one in every five of them enacted into law.

It is mostly funded by right wing corporations and billionaires. (The good news is that the exposure of their hidden agenda has led many previously involved corporations to withdraw their participation. It seems they think it's not good for business to be publicly associated with extremists. Who knew?)

All of this is adding up to a majority of states being run by right wing politicians at the behest of big corporations. You may wonder what the difference is between them and any other political body in the U.S., and that's fair enough. Money does play an outsized role in both parties and at every level and it's a toxic influence on our democracy. But there is a distinction between everyone else and the red state governments that are openly doing the bidding of their corporate masters while fulfilling every crackpot need of their very socially conservative base. Take California for instance, a state fully in Democratic hands which was predicted to crater economically due to its unwillingness to adopt full austerity during a recession

The Legislative Affairs Office finds between July 1 and the end of September, California collected $455 million more than revenue projections made by Governor Jerry Brown’s administration. The number would have been higher, but the state returned more than $340 million in sales taxes to local governments to correct for a prior year accounting discrepancy.

Business doesn't seem to be leaving the state in droves and rich people are staying and paying their taxes. In fact, the economy is getting better all the time. Yes, there are problems as well but I would guess that 99 percent of Californians have no idea who is on the ballot against Governor Jerry Brown, so assured is his re-election. Meanwhile we have that other "experiment" in one Party rule, Kansas, which I wrote about last week. Under Governor Sam Brownback and a far right majority in the legislature the state has slashed taxes and enacted some of the most extreme laws in the nation and it should be instructive: the state is in economic hell and Brownback may be one of the few Republicans to lose his seat next month.

If the polls are right, the pundits and political wags will spin this election as a big loss for Democrats -- and if history is any guide, Democratic political operatives will seize the opportunity to lecture the people that this is a sign the Democrats must move right. But everyone should look a little bit more critically at what that means for real people these days. The GOP in Washington is bad enough, but the GOP in the states is little short of fanatical. One can only hope that a Brownback loss will turn on the light bulb that illuminates the real consequences of this rightward surge: it's tragic.