Amazon helped kill the alt-weekly: One more reason your city looks the same as every other one

S.F. Bay Guardian and Providence Phoenix publish final issues, and Amazon is among the many reasons why 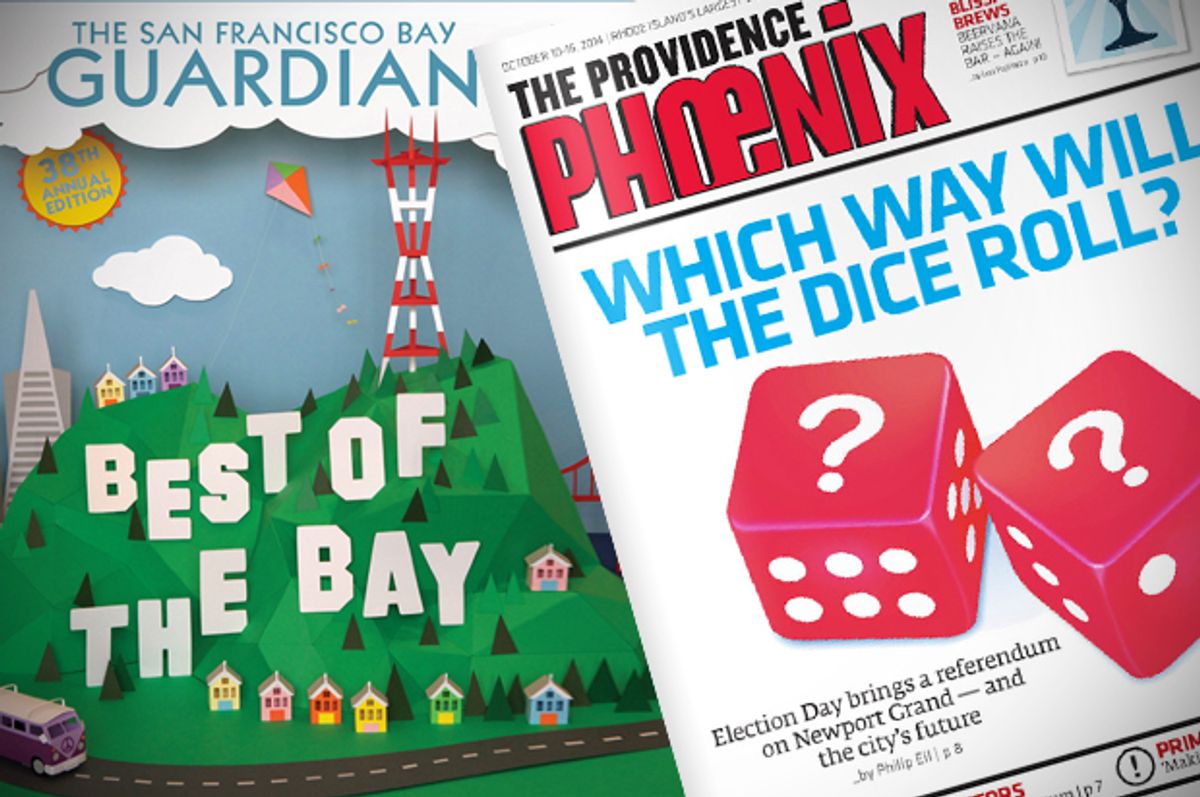 In the San Francisco Bay Area, the unrelenting rise of the tech sector is pushing musicians and middle-class workers – bohemian and bourgeoisie alike – out onto the streets. Across the country in Providence, Rhode Island, Vincent “Buddy” Cianci, a felonious and charismatic former mayor once jailed for corruption, plots his return to City Hall. They’re both the kind of stories that alternative weeklies thrive in covering, especially in a city like San Francisco that has almost never had a decent daily paper. But in both cases, important voices are about to go silent: The San Francisco Bay Guardian, founded in 1966, put out its last issue this week. And The Providence Phoenix, which started in 1979 as The NewPaper will publish its last issue on Friday. (The more older and more substantial Boston Phoenix went under last year.)

It’s no secret that publications of all kinds have struggled lately, especially since the recession hit. The cause of these two casualties, as with any publication, came down to money: It takes too much to put these things out, and advertising in the Internet age brings them less than it used to. As Phoenix owner Steven Mindich put it: “Sadly, after making massive budgetary adjustments in order to trim the costs of operations to a level where we could at least financially break-even, while also ensuring we could keep the paper’s editorial quality at the exceptional level we all demanded – the raw reality of continued losses month after month finally had to be confronted.”

But the alt-press has its own special problems. The most tangible of them is that since they gave up charging for their wares – the Village Voice went free in 1996 -- they lost the ability to raise prices during tough times. As ad rates go, there’s no way to make up the difference besides more cutting.

Most of what’s specifically difficult, though, about alternative weeklies in the marketplace is more abstract and cultural. Many of them – the Boston Phoenix and the Bay Guardian, for instance, or Atlanta’s Creative Loafing and even the first New Times paper – were formed during the late ‘60s and early ‘70s, as an accompaniment to the counterculture. The difference between the people picking up an alt weekly and what Nixon called “the Silent Majority” was stark. In the Reagan ‘80s, some of these papers thrived as well: During a conservative era, the Voice and other papers had a very clear mission in their commitment to coverage of the far right, left-of-the-dial rock bands that never showed up on regular stations, the AIDS crisis, feminist politics, and so on.

But the ‘90s, with Nirvana and other indie bands crossing over to the frat house, and alternative and to some extent gay culture becoming officially (and profitably) “cool,” the lines between the straight and alternative press began to blur. The Phoenix-based New Times, despite its founding in response to the Kent State shootings, became an apolitical-to-libertarian chain dedicated to hardball reporting and exposing malfeasance on both left and right. As New Times swallowed paper after paper in the ‘90s, it sometimes improved them. (Disclosure: I worked for their now-shuttered Los Angeles New Times for five years.) But the sense of what made an alternative weekly different from the local daily, except sex ads and a less frequent publication schedule, became harder to discern.

By the time of the Boston Phoenix’s final issue, in March of last year, its cover showed a vest-wearing bartender in retro glasses making what looks like an artisanal cocktail: You do not need an alt weekly to serve as your guide to the Cocktail Revolution the way you once did to chronicle the offenses of revolting landlords, or tip you off to peace protests, or underground theater or gay films. What were these free weeklies about, anyway?

When the Phoenix shuttered in Boston  in 2013 after losing more than $1 million a year, Jack Shafer of Reuters pointed to Craigslist, which destroyed the lion’s share of classifieds, “anywhere between 20 percent to 50 percent of revenues.” But Shafer also linked the bleeding to a larger, slow-motion collapse of a longstanding urban-bohemian infrastructure.

“Mostly gone, too, is record-company advertising. Before that business was disrupted, the labels would give record stores — remember them? — big bags of “co-op” money to advertise the new releases, and even reissues! Video stores — remember them? — were big advertisers, too. Amazon has helped to clean out whole categories of retailing that once advertised in alt-weeklies, such as electronics, books, music and cameras. Big-box stores have displaced many of the indie retailers that long provided advertising backbone. And while Hollywood still places ads, it’s nothing compared to the heyday. To give you a sense of how precipitous the drop, the smallest edition Washington City Paper printed in 2006 contained 112 pages, with 128-pagers and 136-pagers being the most common. In 2012, the page counts ordinarily ranged between 56 and 72.”

And Borders bookstores and places like Tower Records, he points out, were some of the most reliable place to grab a weekly – until they went under, too.

Finally, the more personal, at times self-indulgent or self-obsessed, voice of alt-weekly scribes — which stood out boldly in the days when their competition was with sober and sometimes stodgy daily papers – makes them feel a bit redundant in the age of the Internet, when every city offers dozens of opinionated people online telling you where to get the best dim sum or the coolest haircut or why the local political establishment should all go to jail.

The bottom line – quite literally – may be that for the alternative press to survive, its publications must find something that many magazines, from (in many years) the New Yorker to the Nation to Harper’s, already have: an owner willing to lose money. This may not be impossible. But with a mission that’s increasingly unclear, and plenty of other places in which rich people can burn cash, it’s not likely, either.