GOP's slick new trick, exposed: Inside their empty "do something" politics 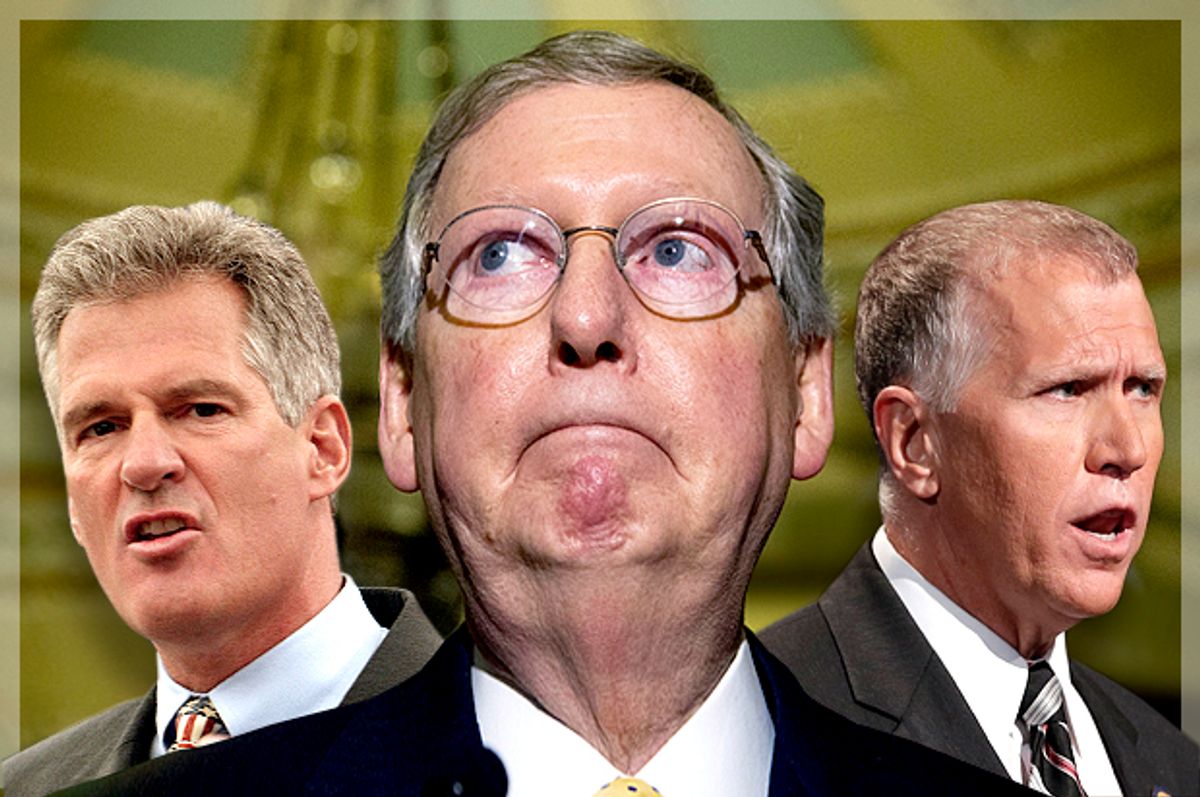 Over the last couple of weeks you’ve probably heard some hysterical pundit or politician offer their own plan for how to best save the nation from the merciless onslaught of the unstoppable Ebola plague. One option that gets tossed around quite a bit is a ban on air travel from the West African countries suffering through the epidemic. Some are calling for the border with Mexico – and only Mexico; Canada is apparently Ebola resistant – to be completely sealed off so that no sneaky viruses can hitch a ride on an undocumented immigrant or terrorist.

These proposals may sound extreme (and they are) but they give the impression that, in the face of crisis, our elected officials and learned commentators want to get stuff done. They favor doing “something” about Ebola, because “something” has to be better than the status quo – we didn’t do these things beforehand, and now we have two or three sick people in Dallas. This “do something” style of politics is an extremely effective way to prey on irrational fears and get people behind you even if what you’re proposing quite obviously won’t fix the problem. And Republicans are proving themselves to be very, very good at it.

“Do something” politics almost always requires an acute crisis of some kind in order to be effective. There has to be a general consensus that a problem exists, that it poses an immediate and tangible threat, and that existing policies won’t be sufficient to solve it. Climate change, by nature of the problem, is a very poor candidate for “do something” political exploitation. Something like the Ebola outbreak, however, is an ideal contender – it’s dominating the news coverage, it’s ripe for fearmongering, and it seems to call out for immediate and effective action by the government.

With regard to Ebola, flight bans and closing the border are generally where Republicans fall when they’re asked what that action should look like. North Carolina Senate candidate Thom Tillis issued a statement earlier this month arguing that “it makes absolutely no sense to risk more cases" by allowing travel to the West African countries.” Scott Brown, running for Senate in New Hampshire, has made himself the Ebola candidate, warning that we have to close the border because “it’s naive to think that people aren’t going to be walking through here who have those types of diseases and/or other types of intent, criminal or terrorist.” Thillis also wants to close down our frontier with Mexico because “we’ve got an Ebola outbreak, we have bad actors that can come across the border.”

Would either of these recommendations help to stop the spread of Ebola? Absolutely not. Closing the border presupposes that someone infected with a deadly hemorrhagic fever can successfully traverse the decidedly inhospitable deserts of northern Mexico without access to basic medical care. That’s not a scenario that experts consider at all likely. As for a travel ban for West Africa, that may seem like it makes sense, but it really doesn’t. For it to be at all effective, we’d have to ban travel from countries that aren’t suffering an outbreak, and even then it could be easily circumvented by a connecting flight to a non-banned nation. Ultimately it would serve little function except to make it harder to fight the outbreaks in those countries.

But all those coherent arguments against the bad policy don’t stand much of a chance when you have a scared public and a media establishment that confuses action for “leadership.” Per this week’s Washington Post survey, two-thirds of Americans are concerned that there will be a full-blown outbreak of Ebola in the country, and an equal number support restricting travel from Ebola-affected countries. National Journal’s Ron Fournier, the media’s chief “leadership” fetishist, wrote a column that acknowledged every single argument against a travel ban, but weighed those against the public's desire for the government to “do more”:

Again, the CDC and White House made a decision that is understandable in a vacuum. From the beginning, Frieden has insisted that a mandatory travel ban would not contain Ebola and could backfire on the United States. "If we isolate these countries, what's not going to happen is disease staying there," he said. "It's going to spread more all over Africa, and we'll be at higher risk."

A ban would have economic consequences, affecting flights and/or travel throughout Europe because no flights come directly from the outbreak zones to the United States.

Still, two-thirds of Americans are concerned about an outbreak. While about 60 percent express at least some confidence in the federal government and local hospital to handle the situation, equal percentages want the government to do more.

“If the virus continues to spread, even slowly and in small numbers,” Fournier concluded, “the president will be forced to reconsider a travel ban. He will look reactive again, not proactive.” Again, we’re not talking about pursuing policy that works. We’re talking about looking like we’re “doing something” to indulge public sentiment.

The Washington Post’s Greg Sargent wrote that the Republicans have turned themselves into “the Doom-and-Disease Chorus” to exploit the general unease over Ebola. They’re nurturing along the perception that existing policies are failing horribly and the likelihood of outright catastrophe is increasing. The “do something” politicking is the natural outflow from all their efforts to keep people scared. It won’t solve the problem – it could even make it worse – but it appeals to the frightened person who’s been made to feel that the situation is slipping into chaos and is just looking for something, anything, to be done.