In defense of Rick Scott: Why I think I might understand his weird fan gambit

If you were debating the vainest man on the planet, and could knock him off his game – you might try it too 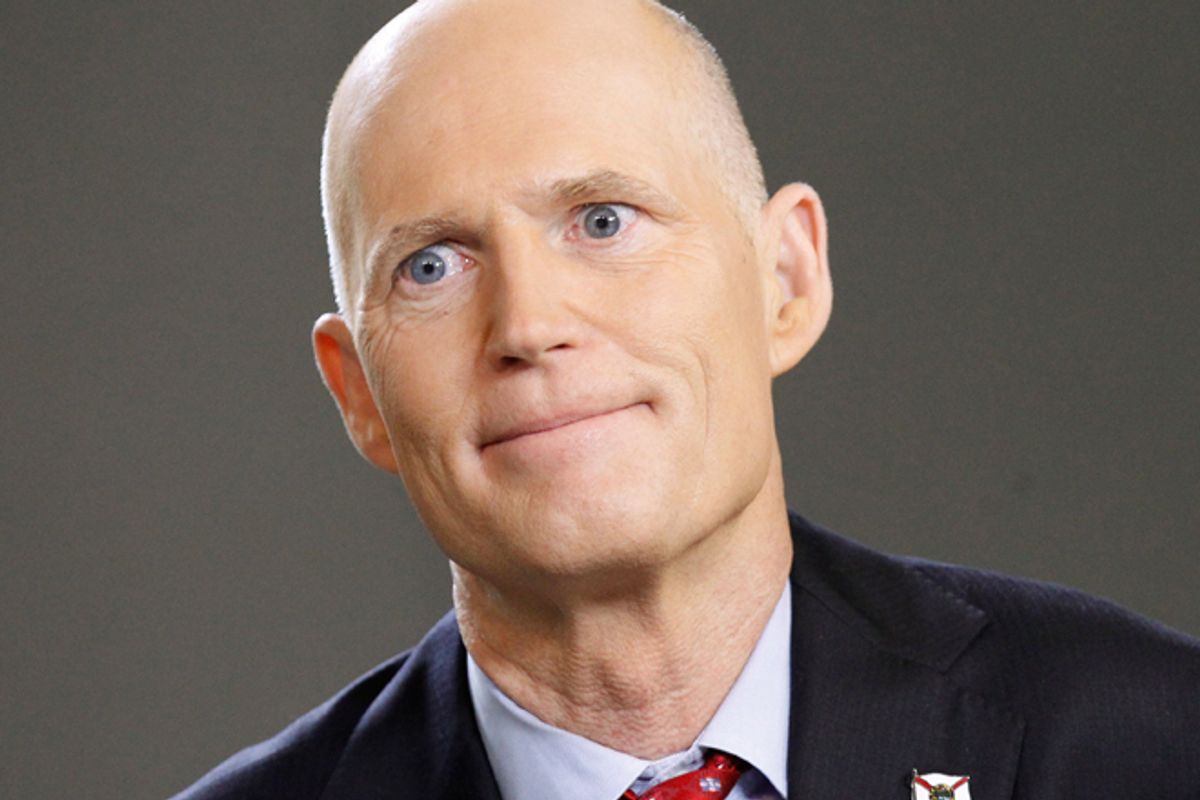 By many accounts, Rick Scott has not been a very good governor of Florida. I’ll certainly shed no tears if he loses his race next month to former Republican governor Charlie Crist. And yet, I feel compelled to defend him in the face of the backlash he’s now facing regarding last night’s debate, and the ensuing #fangate mania.

Before I proceed, I should state up front that I am not a sweater (i.e., a person who sweats). I’m more the neurotic type that’s always cold -- and so, unlike my colleague Jim Newell, my tactile understanding of the sweaty man who insists on bringing a fan everywhere he goes does not come easily. That said, if someone had a biological issue that made them perspire too much I'd have empathy.

But that doesn't seem to be the case with Crist. It's not that he sweats too much; it's that he can't ever be seen sweating. The man with the perpetual tan is so vain that, according to some profiles published today, he insists on bringing an electronic fan with him basically everywhere he goes, strictly for cosmetic purposes. “He travels with his fan, just to make sure he doesn’t look sweaty,” an aide reportedly once said. I understand those who like to cool off sometimes and use a fan. But this is not that.

If you were debating someone as ridiculous as this, wouldn’t you want to get him off his game and make him have to perform without the device?

As someone who used to advise candidates before debates, here’s a dirty little (completely obvious) secret about them: They’re mostly meaningless. They don’t really tell voters much about how the candidates will govern. Reciting talking points and sticking to issue positions that appear on your web site do not really illuminate much. And in the event someone does “win” a debate with a great one-liner or by tripping up the other candidate, very rarely is such a moment revealing of some relevant flaw that would prevent the losing candidate from performing the job well. (It’s not like governors have to engage in formal televised debates as part of the actual job.)

But debates are fun to watch, in the way sports can be, and so they get watched. And they always get covered. So candidates treat them one of two ways. If you’re way ahead of your opponent, you basically try to avoid any “moments” that can be taken out of it and disrupt the rhythm of the race. Your ideal headline from the next day’s papers is something totally generic like “Candidates trade barbs in fiery debate.”

If you’re losing the race or it’s close, like the Florida governor’s race, you see the debate as a chance to score points by making your opponent look horrible. An ideal headline in this instance is “Rick Scott faces the ‘Fangate’ heat.”

And here’s where Scott comes in. Locked in a tied race, he was debating a weirdo who -- like Rod Blagojevich and his famous Paul Mitchell hairbrush -- needs a fan everywhere he goes. So he signed an agreement listing the rules of the debate, which included a clause saying no “electronic devices.” This was presumably an attempt to disorient Crist. And it seemed to be working at first.

According to Scott’s version of events, his campaign “was not notified Charlie had even taken the stage because the last we heard, Crist was in an ‘emergency meeting’ with debate organizers pleading for his precious fan.” Given how close Crist reportedly is to his fans, this isn’t impossible to believe.

Everything changed for Scott when, magically, a fan appeared in Crist’s lectern, and the Democrat suddenly came to his place on stage. (While debate organizers reportedly say this violated the rules, Crist’s camp released copies of a debate agreement that included a handwritten “fans allowed” addendum.) Either way, Crist ended up winning this bizarre standoff because he was able to sneak his fan onto the stage – perhaps illegally – and enter the stage first. The debate organizers didn’t have the heart or interest in removing the fan, and so Scott had to come on afterwards and take the fall.

The very weird part of this is that it took Scott 6-7 minutes to come on stage after Crist. It doesn't seem likely that he was late out of some fear of debating a fan-possessed Crist (Scott ultimately came on stage and held his own in the debate). His campaign says he didn’t know Crist was on stage, which is plausible -- but if true, demonstrates logistical incompetence.

So Rick Scott’s campaign is guilty of some logistical incompetence, yes. His team should have had him ready to hit the stage much sooner. But, in his defense, he definitely wasn't the only ridiculous governor on stage that night.