O’Reilly vs. Stewart: The ugly truth about that white privilege debate

Jon Stewart brought the facts, but the issue is about empathy, not evidence -- and O’Reilly still doesn’t have any 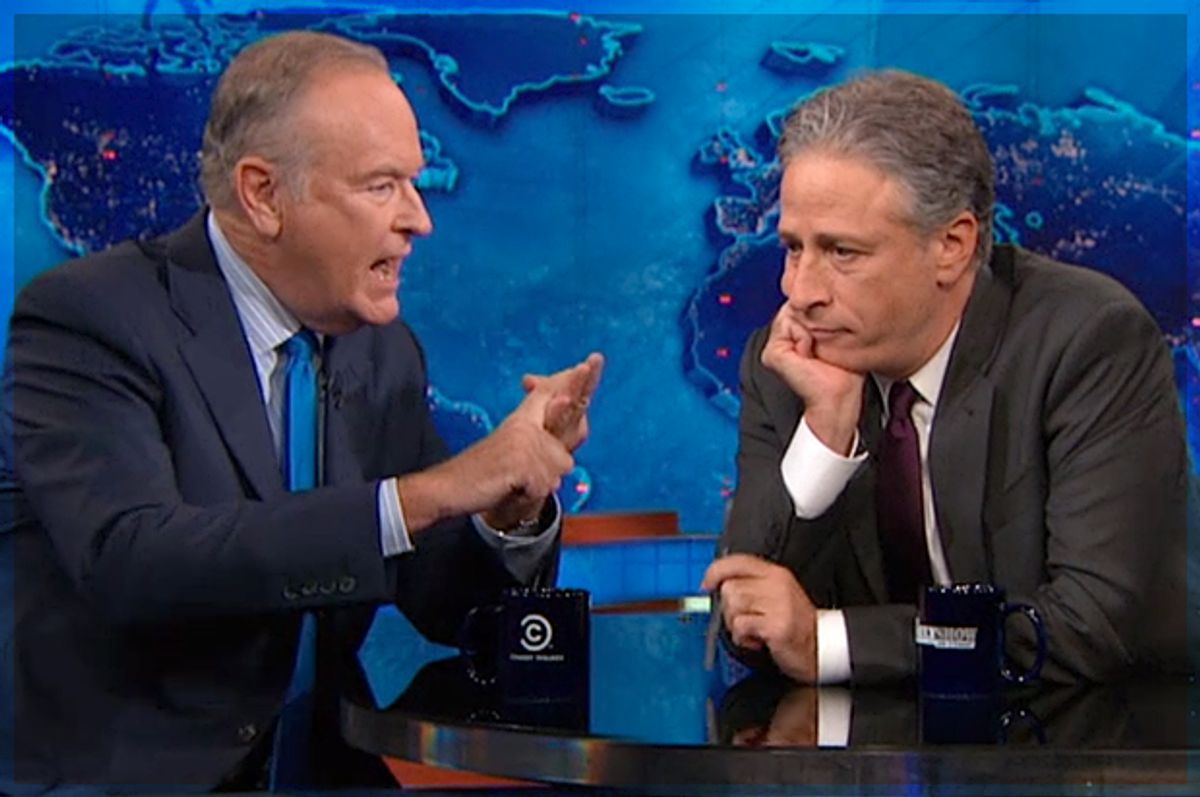 While the progressive world of social media was crowing that The Daily Show’s Jon Stewart cleaned Fox’s Bill O’Reilly’s clock in their white privilege debate last night, Fox spent the morning doing what Fox does so well: Scaring the bejesus out of white people:

Business Insider called the O’Reilly-Stewart showdown “epic,” while Vox kvelled that the Daily Show host got to say everything we all wished we could say to O’Reilly. (Probably an exaggeration: I have absolutely nothing I wish to say to O’Reilly.)

Here at Salon we made it our “must-see morning clip.” And it is must-see, because it’s important to recognize that O’Reilly’s point of view can’t be beaten by logic or evidence. It’s not about evidence but empathy. Judged on his own terms, O’Reilly actually won the debate.

At this point the whole thing feels like brand-enhancing shtick for both men. “I want you to admit that there is such a thing as white privilege,” Stewart opened, proving that he knows there’s no hope of a genuine debate or even conversation. “I just want you to say I’ve been terribly wrong about this.”

O’Reilly demands that Stewart admit there’s “Asian privilege,” his new secret weapon in the war on the war on racism.  As long as O’Reilly can show that “Asians” are doing better than white Americans -- of course that’s only certain subgroups of Asians, for complicated reasons -- he can prove that white Americans are blame-proof for the struggles of black Americans.

Of course O’Reilly will concede that slavery and Jim Crow were bad things, long ago, and Stewart even gets him to admit that his own hometown of Levittown once refused to sell homes to blacks – but that’s long ago, too. Today’s America “is now a place where if you work hard, and you’re honest, you can succeed.” It’s just that simple.

Of course, it’s not. But on the issue of “convincing” white people that privilege exists when they firmly believe otherwise, I feel much the way I felt about Ta-Nahesi Coates’s reparations piece in the Atlantic: It may be worth the valiant try, but it’s not likely to succeed. Historians pointed out that nothing Coates wrote was “new,” and yet he pulled it all together in a way that plain old reasonably educated white Americans might encounter it, and come away understanding that you can’t say racial discrimination died with the Civil Rights and Voting Rights Act.

Coates showed that the systematic and mostly legal extortion of black wealth by banks and real estate interests, which continues in various forms today, may be as important as slavery and Jim Crow in perpetuating disadvantage. Politically curious white people who didn’t know that history (and perhaps some black people too) undoubtedly learned something, and maybe even changed their opinions politically, on the margins. People like O’Reilly either didn’t read it or saw nothing in it but anecdotal sob stories that didn’t shatter their underlying faith, expressed well by Father O’Reilly: “America is now a place where if you work hard, and you’re honest, you can succeed.”

Against that shatterproof logic, Stewart only had sarcasm and the term “systematic subjugation.” On O’Reilly's own terms, he won hands down.

The truth is, if you want to understand white privilege, there is plenty of evidence to examine to prove that it exists. It’s easy. You stand in the shadow of 400 years of monstrous, inventive cruelty, and you shudder, and then you get to work for change. But if you want to deny it, there is plenty of “evidence” for that argument too, mainly “Asians” and Oprah and Obama and let’s throw in Condoleezza Rice. We’re not going to convince O’Reilly and his demographic. We have to out-organize, out-vote and out-live them.

That’s why these two men’s showdowns are getting tedious to me. It helps Stewart’s brand, it help’s O’Reilly’s brand. Stewart proves he's superior, O'Reilly proves he's an embattled warrior for the truth. Two white men, making their money, and everybody goes home happy. The Daily Show host even admitted at the end of the show that “it’s F-ing fun!”

I love Jon Stewart, but I have to say; it’s hard not to wonder if the guy who told the “Crossfire” debaters they were “hurting America” a decade ago might say the same about the two guys yammering last night.