The lies we live by: What "Gone Girl" and "Transparent" have in common 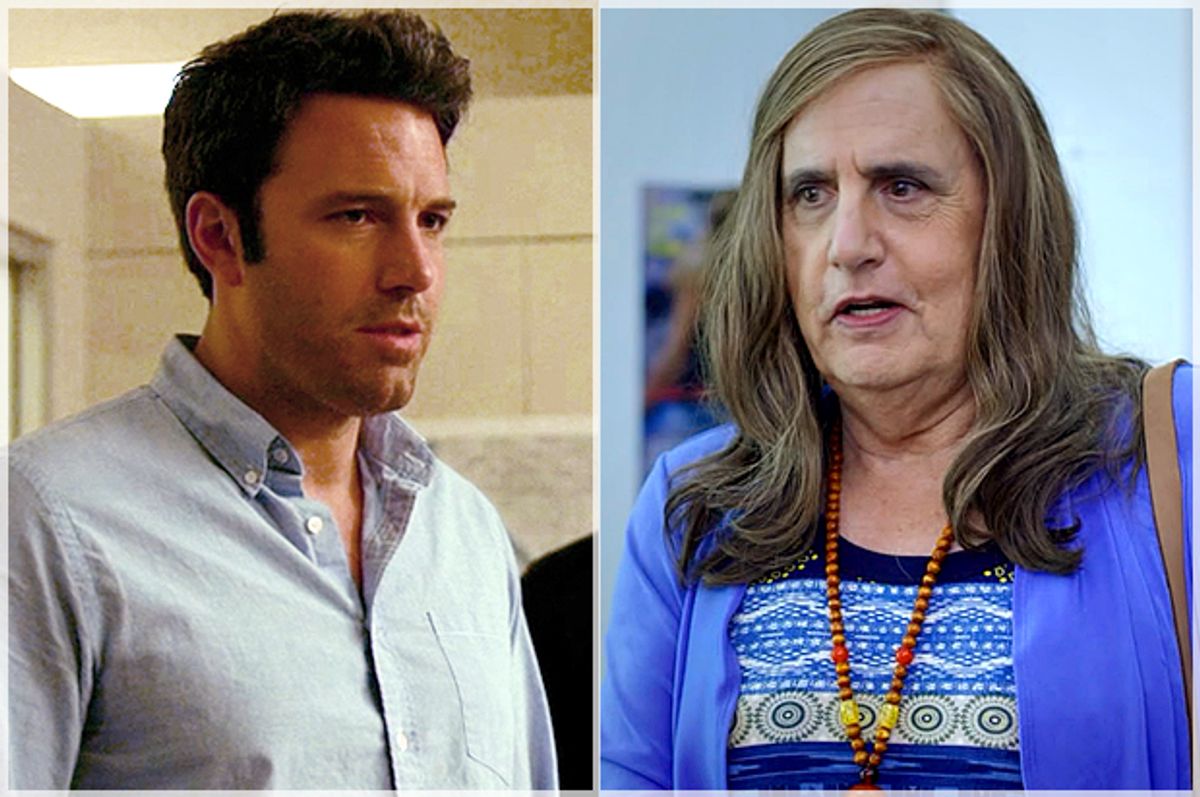 Carl Jung, founder of analytical psychology and the person you can blame for every “Are You An Introvert or Extrovert” quiz on your Facebook feed, spoke often of the “persona.” He called it “a kind of mask, designed on the one hand to make a definite impression upon others, and on the other to conceal the true nature of the individual.”

Jung saw the persona as a necessary tool for existence in an adult world, but also knew that mismanagement of said persona could lead to any number of downfalls, like becoming that notorious yes-man middle manager who only lives to please. Or the shameless conformist, terrified by the potential judgment of others. Or the father who reveals himself to be trans. Or the husband and wife who sell each other a bill of goods during courtship. You may recognize those latter two examples as two of the year’s finest works of pop culture, “Gone Girl” and “Transparent.” But these stories are not just about questioning the existence and necessity of the “persona”--they’re about investigating how those personas affect our relationships with everyone around us.

All relationships are contracts at their core. They are complex series of microtransactions and compromises, wherein one person offers themselves, as is, to another person in exchange for whatever the two decide is fair. Is this an overly clinical way to view human interaction? Of course. But it’s not inaccurate.

What happens then, when a person enters into a relationship not in good faith? If their persona misrepresents the product — themselves — to what extent does that render the social contract null and void? These are questions we are often uncomfortable with discussing, choosing instead a kind of blithe faith in our own powers of character discernment. But how often do we end up misjudging? That, ultimately, is what’s so riveting about “Gone Girl” and “Transparent.” Sure one is about a cross-dressing patriatch and the other about a psychopathic wife who stages her own murder and frames her philandering husband. But both examine these questions thoroughly before landing in roughly the same place.

In David Fincher’s “Gone Girl” (adapted mostly faithfully from the novel by Gillian Flynn), the focus is the marriage of Amy and Nick Dunne, a once happyish couple who grow disillusioned with time as each discovers that the persona of the other, presented during courtship, was not at all the person they actually married. Both deal with this discovered deception in their own way: Nick by sleeping with a much younger woman and Amy by framing Nick for her murder. Typically, one would assume that the true violation of their relationship contract comes when Nick fornicates with another woman or, if we’re being generous, when Amy fakes her own death. But is that really when the social contract is nullified, or has it been void all along? Hasn’t each promised the other something they are incapable of delivering?

“Transparent,” on the other hand, focuses on the familial bonds of the Pfefferman family in the aftermath of father Maura’s coming-out as a trans woman. The family is particularly close-knit, but all of the three adult children are dealing with their own processes of becoming-- processes thrown into sharp relief by Maura’s journey. Much of the heart of the show centers on Maura’s relationship with her youngest daughter, Ali, with whom she’s always felt particularly kindred. As the first season progresses, a rift opens between the two, fueled by Maura’s long-kept secret and the historical revelations it uncovers. Through these revelations, Ali sees her life and her father’s motivations through a different lens that strains their already-fraying relationship. The parent-child bond is always a complicated one, but Maura’s revelation paints everything in a new light, which spurs an inevitable question: If everything Ali and her siblings have known about their father is, at the very core of it, a lie, does that destabilize the relationship to the point of dissolution? Are their memories of Maura now necessarily haunted by a ghost of someone who never really was?

At heart, both pieces examine what a relationship can and cannot endure when it lays bare the deception at its core. In “Gone Girl,” much of the deception is built into the wooing process, a function of societal expectations and the chemistry of attraction. Love makes us want to be the best possible versions of ourselves; that euphoria can make us believe we are something we are not. But fooling yourself and fooling someone else are clearly very different things. While “Gone Girl” serves as a dramatically heightened example of this, it occurs in every marriage to some degree. We’re not marrying each other; we’re marrying ideas of each other.

In the end, Ali and Maura build the most tentative of connections all over again, but it is as fragile and frail as a strand of hair. Amy and Nick, astonishingly enough, re-embark upon their marriage with clear eyes. So contracts can be nullified and relationships fractured. But as long both parties are willing, for better or for worse, they can always be renegotiated, too.