"Dear White People" is the college movie of our times

As an African American student on an Ivy League campus, I was nervous to see it. But now I think everyone should 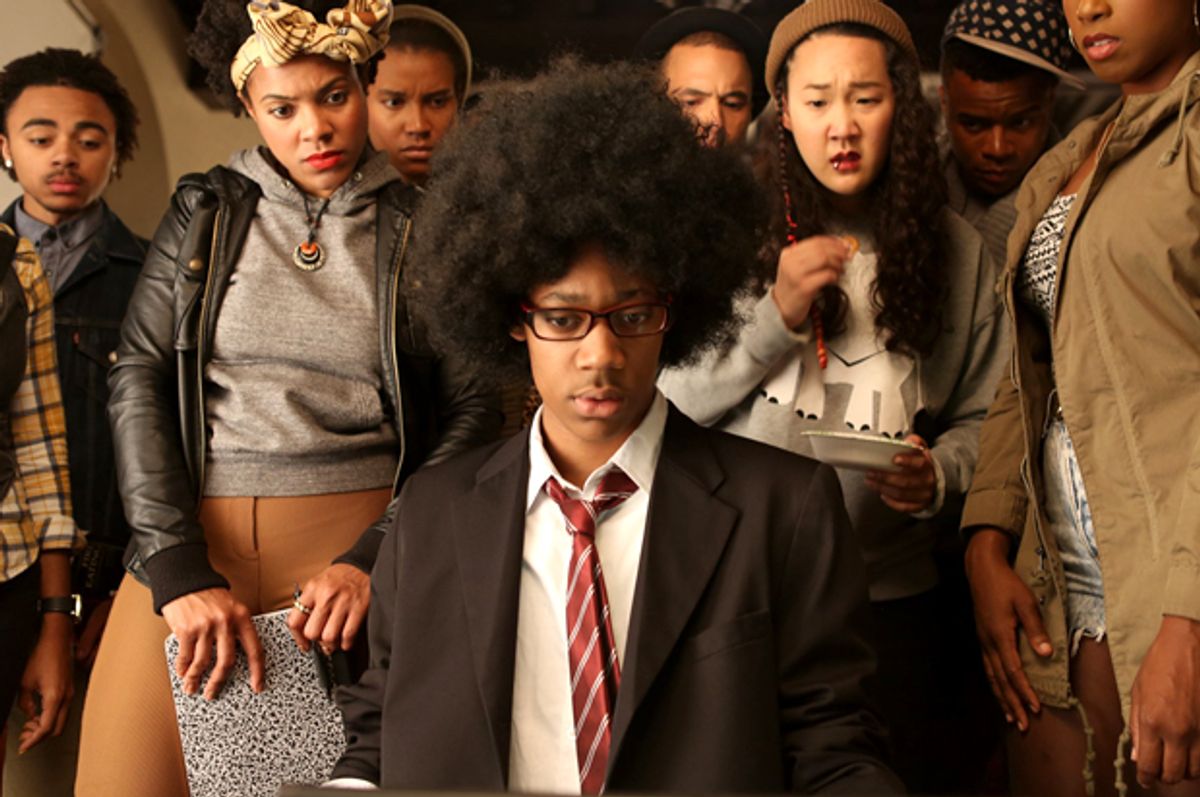 I first saw the trailer for "Dear White People," the directorial debut of Justin Simien, like most people: through social media. It popped up in my Facebook feed one day and underneath, in the comments, ensued a short debate between two of my friends, both black students at Ivy League schools, about whether or not they wanted to see this movie. One of them definitely did, because the situations presented at fictional Winchester University, a predominantly white elite college where racial tensions are present in everything from casual dining hall conversations to sex, were “like, too real.”  She felt like she could find a real-life counterpart For each of the characters on campus. But the other didn’t want to see the film for that very same reason. “Yeah,” she typed. “It’s too real. And it’s not funny.”

Personally, I watched the trailer and was immediately supportive. I gave what would’ve been burrito money for the month to back the project and I love burritos more than I love pretty much anything. But there was something bothering me. I was happy that it was being made, very proud that the a young director and writer of color was getting such a huge opportunity, but I also found myself decidedly unamused and struggled to figure out why.

Then, seeing the Facebook discussion, it hit me. I could snap my fingers in recognition of truth, I could “yaaassss” at the idea of calling white people out on their B.S., but that wasn’t enough for me. And the things I was snapping at were serious enough, disturbing enough, and close to home enough that I couldn’t bring myself to laugh at them. In fact, I was uncomfortable. Something about this movie was bothering me in a very deep way. So, of course, I knew I had to go see it.

The world of "Dear White People" is one in which Samantha White, the main character and a biracial firebrand of a student activist, hosts a radio show where she addresses the hypocrisies, misunderstandings, and outright ignorance the black community faces on a daily basis. This antagonizes Kurt, the white president of the campus humor magazine, who sees her as the only real racist around. Kurt is old money and spoiled, the son of the school’s president. The magazine he leads, Pastiche, seems to serve as a mash-up of frat culture, final club wealth, and elite arts club snobbery. A racist party hosted by Pastiche is the central conflict of the movie. As an organization, it has a long history of creating successful comedy writers. At one point a character says, “The SNL writers’ room is half Harvard Lampoon and half Pastiche.”

Full disclosure: I happen to currently be the very much African-American president of that first, very real, campus humor magazine.

My reaction to that line was to glance from left to right, drop my jaw, and clutch my chest like I was an extra in "Days of Our Lives." Had I worn pearls, I would have clutched them until my hand bled. I knew from that moment all impartiality was out the window. I slid down in my seat and prepared to see the fictional equivalent of the organization I lead be the portrayed as a racist, elitist, out-of-touch force of havoc and conservatism. “If this is what people think of Lampoon, DASH ME ACROSS THE ROCKS,” were the exact words I wrote in my notebook. “Swing low, sweet chariot. Take me on home.”

But, upon reflection, I found the source of my original discomfort. I was uncomfortable with the obtuse simplification of race relations on selective college campuses. I was disappointed that instead of getting at how much we try not to talk about race, how much we bury it so deep, obscure it, and shove it into a neat departmental box with some safely meaningless name like “African and Afro-American Diasporic Urban Race Theory and Culture Studies,” "Dear White People" shows a campus that makes everything about race--where a radio show called “Dear White People” is even allowed to exist in the first place.

I think the only problem with this movie is also its greatest asset: the film tells the truth. The movie explores race and privilege, with all the complexities that come with that in “post-racial” America, but authenticity and comedy are not the same thing. To me, the funniest part in the entire movie is the silent movie project Sam presents to her media class, a hilarious short film full of white-faced white people losing their Caucasian minds over Obama. It’s over-the-top and ridiculous, both in topic and form. As the actual movie stands, it’s both too real and not real enough. It’s just one shuck-and-jive removed from life, which stifles its comedy.

When it comes to their depiction of the campus humor magazine, that’s what got to me. That’s what stopped me from laughing. I was more than a little scared that there was too much truth to it.

Overall, comedically, I think the movie needs to pick whether it’s a satire or not. Dramatically, the movie has a slight tendency for heavy-handed lecturing and dramatic exits. But conceptually and thematically, I found myself moved. "Dear White People" isn’t really a letter to white people at all. It’s a letter to all of us. It’s a letter to people like me who sometimes prefer not be called out on their own B.S. Thus, despite my moments of extreme discomfort, I left the theater with only one thought in my head:

And I think others definitely do, too.

Alexis Wilkinson is the president of the Harvard Lampoon.