From "Adore" to "Addicted": How movies handle female adulterers

When women cheat on their partners, we're supposed to find it particularly shocking 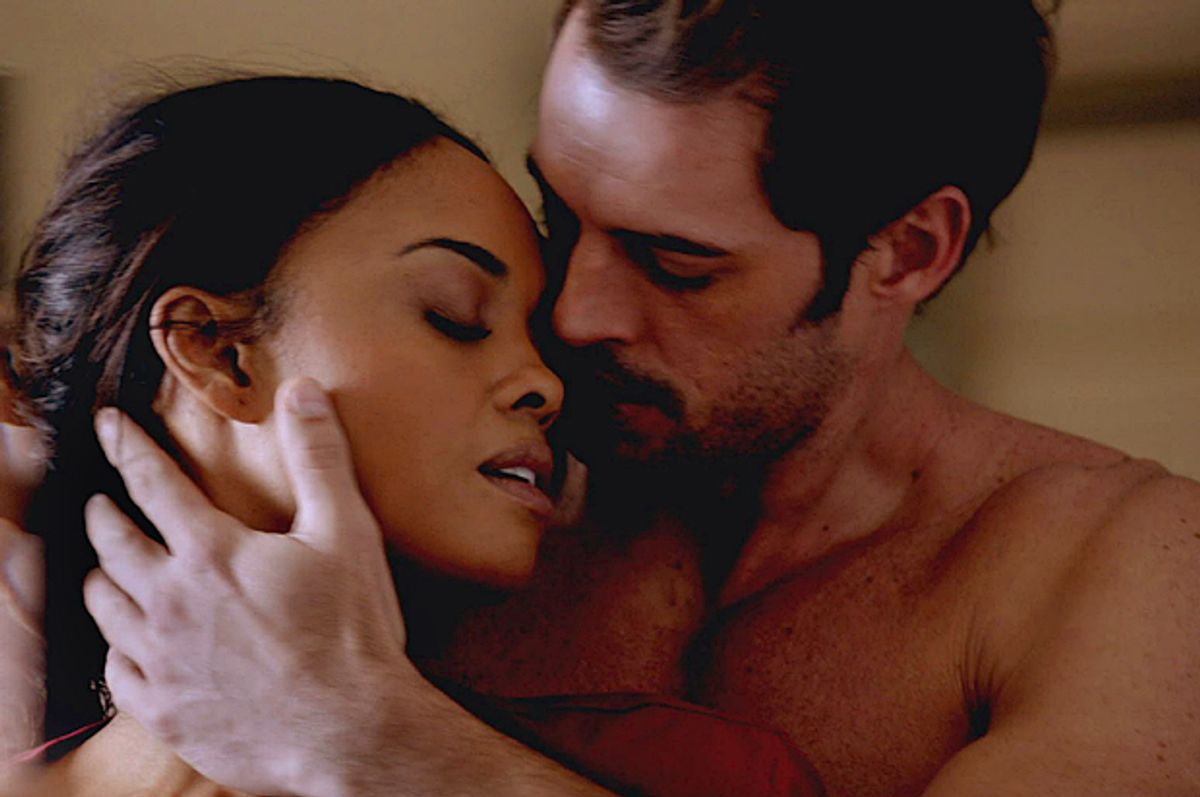 Sure, there are moral lessons about fidelity in “affair” films—even when Demi Moore donned period garb to play Hester Prynne in the risible adaptation of "The Scarlet Letter." But mostly, as in the steamy new film "Addicted," they are sexy movies featuring beautiful people baring their well-formed bodies as they behave very badly. When these cheaters are in the throes of passion, viewers shouldn’t be thinking about how wrong it is, but how good it looks and feels. These films are the cinematic equivalent of romance novels or erotica, a chance to escape and live in the fantasy by proxy. But somehow when women engage in extramarital trysts in movies, it's supposed to be particularly shocking.

"Addicted": Just now out in theaters, this adaptation of Zane’s popular erotic novel opens with sex addict Zoe (Sharon Leal) tiring out her handsome husband Jason (Boris Kodjoe) after two bouts of lovemaking in their bed. But Zoe wants more. She quickly falls for a new client, the sexy, muscled Cuban artist Quinton Canosa (William Levy) who has trouble keeping his shirt (or pants) on. Zoe knows it’s wrong, but their passion just feels so right. However, the insatiable Zoe takes another lover, Corey (Tyson Beckford), whom she meets at a bar and later gropes in the bathroom. When Corey takes Zoe to an S&M club, she learns some tips for spicing up her marriage. But Zoe’s addiction practically destroys her relationship, her career, and her life in the process. Thankfully, she visits a therapist, Dr. Marcella Spencer (Tasha Smith), who encourages Zoe to confront an unfortunate childhood incident that prompted her sex addiction.

"Unfaithful": Adrian Lyne ("Fatal Attraction") returned to the topic of adultery in his 2002 film, "Unfaithful," which starred Diane Lane in a fantastic (and Oscar-nominated) performance as Connie Sumer, a woman who cheats on her husband Ed (Richard Gere) with the drop-dead gorgeous Paul Martel (Olivier Martinez). Their passionate affair involves sex, sex and more sex before Ed discovers Connie’s deception and their marriage is put to an extreme test.

"Body Heat": Lawrence Kasdan’s sizzling update of "Double Indemnity" hooks viewers early on when Matty Walker (Kathleen Turner in a knockout debut) spills cherry water ice on her white blouse. Ned Racine (William Hurt) offer to wipe it up, at which point she responds, “You don’t want to lick it?” Matty is a married woman, but as Ned points out, she didn’t say happily married. They soon begin a passionate but unwise affair, which leads to her convincing him to murder her husband Edmund (Richard Crenna) for his money. They can use her inheritance to run away together, she explains. Of course, Ned finds out that Matty is duplicitous about things other than her marriage.

"Little Children": Todd Field’s compelling adaptation of Tom Perrotta’s novel concerns the unhappily married Sarah (Kate Winslet), who begins a sweaty affair with the equally unhappy and also married Brad (Patrick Wilson). Their illicit suburban sex is as hot as the sweltering summer days; there's the requisite sex scene against a vibrating washing machine. The characters may be unable to resist their desires, and soon plan to run off together, but will something get in the way? This is a movie, so yes.

"Take This Waltz": While Sarah Polley’s intimate drama isn’t as erotic as some of the other films on this list, "Take This Waltz" is more emotionally stimulating. Margot (Michelle Williams) is married to Lou (Seth Rogen). When she meets, flirts and unexpectedly falls for Daniel (Luke Kirby), a handsome artist who lives down the street, temptation eats away at her. Margot and Daniel begin seeing each other, and when he confesses in a sexy whisper what he would like to do to her, it’s pretty powerful stuff. Margot feels conflicted, however, and how she reacts is what makes "Take This Waltz" interesting. (Haters find the film too twee, with annoying cutesy-quirky touches like Daniel being a rickshaw driver.) Significantly, Polley addressed the topic of adultery again, with astonishing results, in her subsequent documentary, "The Stories We Tell."

"Adore": It’s not a good movie. In all honesty, it’s a totally trashy one, built on a concept that seems better suited to Lifetime. The film pivots on the close friendship between Lil (Naomi Watts), a widow, and her best friend and neighbor, Roz (Robin Wright), who is married to Harold (Ben Mendelsohn). Lil’s son Ian (Xavier Samuel) is best friends with Roz’s son, Tom (James Frecheville). Mothers and sons share a comfortable, easygoing life together. As soon as Harold is out of town Ian is hooking up with Roz, and Tom is doing the same with his MILF, Lil. It’s no surprise that discoveries are made and a marriage as well as a friendship or two is destroyed. "Adore" takes its soap-operatics far too seriously, but its premise is pretty irresistible.

"Chloe": In Atom Egoyan’s dubious erotic drama, Catherine (Julianne Moore) is convinced that her husband David (Liam Neeson) is being unfaithful. So she hires Chloe (Amanda Seyfried), a prostitute, to “seduce” him and report back to her to confirm her suspicions. However, Catherine’s plan spectacularly backfires. When Chloe describes her sexual activity with David (indicating that he is in fact an adulterer) Catherine is disheartened--but also turned on. Soon Catherine herself is being unfaithful to her husband by sleeping with Chloe. What’s more, Chloe falls in love with her “client.” "Chloe" is ludicrous, but it’s just tawdry enough to be enjoyable.

"The Kids Are All Right": Lisa Cholodenko has a thing for featuring stylish affairs, from "High Art" to "Laurel Canyon" to "The Kids Are All Right." But "Kids" is distinguished because it has Jules (Julianne Moore) cheating on her partner Nic (Annette Bening) with Paul (Mark Ruffalo), who is the biological father of their kids. Jules’ motivation for screwing around is as much a symptom of feeling neglected in her relationship with Nic as it is her impulse to get to know—albeit on an intimate level—the man who was an integral part of their family’s life without ever “being there.” Cholodenko plays the affair as farce, with broad, comic lovemaking scenes. But she uses this humor to finds the emotional heart at the core of the lesbian couple’s relationship.

"The Canyons": Paul Schrader ("American Gigolo") is a master of sophisticated sleaze. In "The Canyons," written by Bret Easton Ellis, Schrader tackles cheating partners in Tinseltown. The film has a notorious reputation because of reports of a troubled shoot, but it is actually quite a good film. Christian (porn star James Deen) suspects his girlfriend Tara (Lindsay Lohan) is sleeping with Ryan (Nolan Funk), and, well, she is. Christian is irked by this discovery, perhaps because they have an open relationship, which includes kinky activities, such as having couples over for the occasional fourgy. So the jealous Christian plots a mean revenge. In the end it's actually a pretty canny, if grossly exaggerated, portrait of why relationships can be so difficult.

"The Room": Tommy Wiseau’s midnight masterpiece is arguably the single greatest film on the topic of cuckoldry, ever. This probing psychological drama has Johnny (Wiseau) and his fiancée Lisa’s (Juliette Danielle) picture-perfect relationship crumbling when she becomes romantically involved with his best friend, Mark (Greg Sestero). It’s heartbreaking that Lisa cheats on Johnny, because he loves her. He buys her flowers and chocolates. The couple also enjoys some pretty steamy sex on more than one occasion to the strains of some awesome slow jams. Mark does drop an ominous hint when he asks Johnny if he thinks girls like to cheat the way guys do, but Johnny insists that his Lisa is loyal.