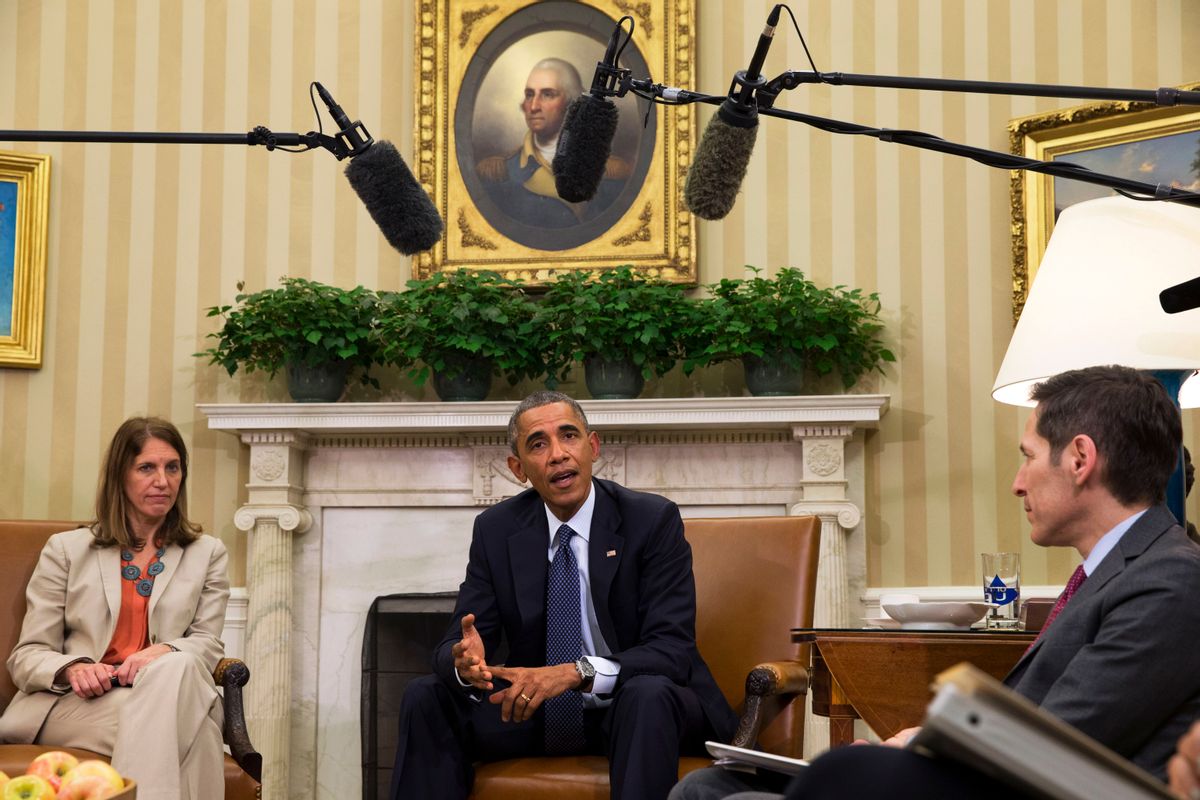 President Barack Obama speaks to the media about the governments Ebola response, in the Oval Office of the White House Thursday, Oct. 16, 2014, in Washington. At left is Sylvia Burwell, Secretary of Health and Human Services, and at right is Dr. Thomas Frieden, Director of the Centers for Disease Control and Prevention. (AP Photo/Jacquelyn Martin) (AP)
--

President Barack Obama turned to a trusted adviser to lead the nation's Ebola response as efforts to clamp down on any possible route of infection from three Texas cases expanded to include a cruise ship at sea and multiple airline flights. The World Health Organization admitted making mistakes in failing to contain the outbreak still spreading out of control in Liberia, Sierra Leone and Guinea.

A look at the top Ebola developments worldwide Friday:

Facing renewed criticism of his handling of the crisis, Obama made Ron Klain, a former chief of staff to Vice President Joe Biden, his point man on fighting Ebola at home and in West Africa. Klain will report to national security adviser Susan Rice and to homeland security adviser Lisa Monaco, the White House said.

Meanwhile, the U.N. health agency said in a draft internal document obtained by The Associated Press that "nearly everyone involved in the outbreak response failed to see some fairly plain writing on the wall."

The response was marred by incompetency and ineffective bureaucracy, the document said, and experts should have realized that traditional containment methods would not work in an African region with porous borders and broken health systems.

Government officials were taking steps to remove a Dallas health care worker who handled an Ebola lab specimen from a Caribbean cruise. In the meantime, she was keeping herself quarantined and being monitored for any signs of infection, officials said.

The woman has shown no signs of the disease for the past 19 days, according to a State Department spokeswoman. The Centers for Disease Control and Prevention says Ebola is not contagious until symptoms appear and that the incubation period is 21 days.

Still, under tighter travel rules placed on Dallas hospital workers after a nurse caught Ebola from a Liberian patient, the woman should not be on the ship.

A North Carolina drugmaker plans to test its experimental antiviral drug in patients who have Ebola, after getting authorization from regulators at the Food and Drug Administration.

Chimerix Inc. said it has received FDA clearance to proceed with a trial examining the safety and effectiveness of its brincidofovir tablets. The company said in a statement that the drug is available for immediate use.

The FDA does not publicly confirm when it has granted companies permission to begin testing. The agency has not approved any drugs or vaccines to treat Ebola.

The death toll from Ebola is expected to rise this week to more than 4,500 people out of 9,000 infected, with the number of cases possibly doubling every four weeks, according to the WHO.