The emptying of New York City

Nearly 1 million fewer people live in Manhattan now than a century ago. One reason: It got richer 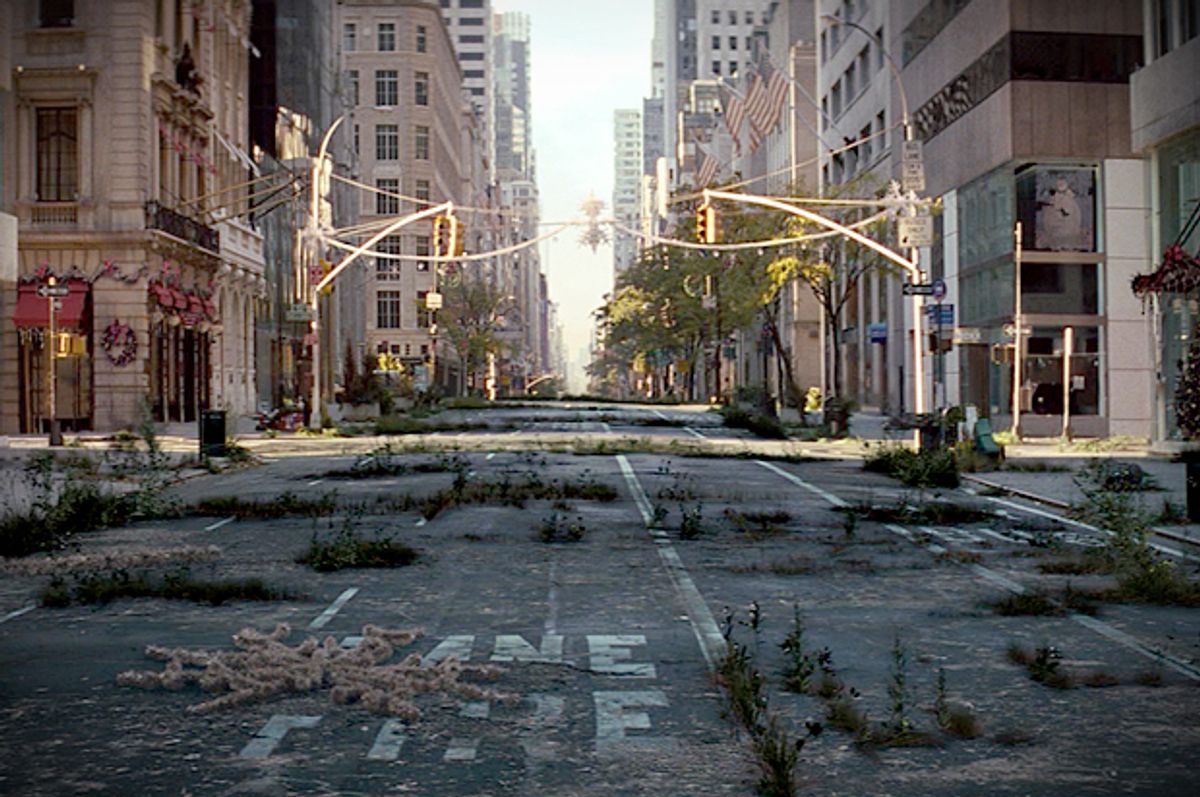 New York City, in a scene from "I Am Legend" (Warner Bros. Pictures)
--

In the past century, urban Americans have lived out a Goldilocks fable of urban density. In the tubercular ghettoes, we had it too high; we had it too low in the exurban wastelands. Today's urban planners, developers and residents are trying to get it just right.

The term “residential density” provokes strong mental images, depending on whether you relish or disdain the chaos of city life. It appears in an academic paper on Brazilian favelas, and a brochure for condominiums in Philadelphia. On surveys on American living preferences, the concept is frequently embedded in questions about trading single-family homes for walkable neighborhoods. Mayors talk about “densification” as the solution to urban problems like high land prices, traffic, sprawl, and social isolation. It is cited as a prerequisite for transit projects, and a motivator for road expansion.

But the term is as confusing as it is widely employed.

Part of the problem is intrinsic: We don’t have a standardized definition for residential density, even if we agree to refer to “nighttime density” — the number of people who call a particular area home. Its definitions vary to the extent that its general use is almost meaningless.

The second aspect is external: People tend to misunderstand density’s appearance. You can’t determine the density of a neighborhood by the size or proximity of its buildings.

Finally, we don’t have a calculus for how density is influenced by factors like wealth, culture and technology.

All this is especially crucial right now, because the world is rapidly urbanizing. Even cities with well-built transportation networks are having trouble fitting residents within reasonable commuting distances. Density may be the single most-important metric of the modern city. So what do we talk about when we talk about density?

A working paper by Solly Angel and Patrick Lamson-Hall, “The Rise and Fall of Manhattan’s Densities, 1800-2010,” touches on all of these issues in its quest to chart two centuries of settlement patterns on the island. Angel, a professor at NYU’s Stern Urbanization Project, and Lamson-Hall, a research scholar at the same, show that historical density is not as simple as dividing population by area — and above all, that it is only tenuously related to the architectural profile of the city.

The hardest question, in calculating residential density, is the only question: How do you measure area? Because official urban boundaries fluctuate wildly between cities — some, like Toronto or Jacksonville, include vast tracts of suburban land, some, like Atlanta or Miami, are tiny fractions of their metropolitan areas — comparative rankings based on city size are useless. The Harvard economist Ed Glaeser, for example, has written that Shanghai and Beijing are less than half as dense as Los Angeles, which tells you everything you need to know about the utility of comparative urban density measurements.

But even if we restrict the measurement to one city or neighborhood, what ought to be included? The land occupied by residential buildings, certainly. What about roads? On the one hand, they are inflexible, generally unavailable for construction purposes; on the other, their size is a prime determinant of neighborhood character, commerce, and the potential for mass transit.

Should green space count against density? Including Central Park substantially lowers the density of Upper Manhattan, producing a metric at odds with the area’s settlement patterns, transportation uses, and the distribution of shops and restaurants. Yet naming the Upper West Side the densest neighborhood in Manhattan also seems misleading, since it’s sandwiched between the vast open spaces of Central Park and the Hudson River.

Every analyst sets different rules. Angel and Lamson-Hall measure only Manhattan’s “built-up area,” discounting water and parks (an important choice) and roads (less so, because of Manhattan’s uniform street sizes). To do so requires substantial statistical innovation, since both administrative boundaries and the built-up land within them have fluctuated over the years.

Their study of Manhattan, possibly the most detailed examination of how urban density changes over time, shows how crowded the island was a century ago. We already knew something to this effect, because Manhattan’s population peaked at 2.33 million that year. Today it’s 1.63 million.

But Angel and Lamson-Hall elaborate on this in a few ways. For one thing, their results show population block by block and year by year. This level of detail shows that it wasn’t just the Lower East Side, with more than 1,500 persons per hectare, that was unusually dense in 1910. Nearly all of Manhattan, even the recently urbanized Upper East Side, was as dense as the island’s densest neighborhoods today.

They also calculate historical floor area ratio (FAR) — the amount of square footage in a given building divided by its footprint. (Broadly, FAR corresponds to the number of stories: FAR 3 means there’s three times as much floor space as land; FAR 20 means a 20-story building rising straight up like a wood block.) Residential density is a good determinant of commercial activity and transit potential, but only in conjunction with building size (FAR) does it reveal anything about living conditions. Density produces crowded sidewalks but not necessarily crowded apartments.

Conversely, FAR (which is how zoning is dictated) isn’t necessarily a good indicator of density. The five-story tenement at 97 Orchard Street was designed to house 20 families in apartments of 325 square feet each. The skyscraper at 432 Park, the tallest residential building in the Western Hemisphere, will have five times as many apartments – in 64 times the square footage.

This isn’t visible to the naked eye. And what is visible may be deceiving. Take the Baruch Houses, for example, the collection of 13- and 14-story buildings that replaced a large portion of the Lower East Side. This is one of Manhattan’s largest public housing developments, built in the tower-in-the-park style. (Structures cover only 13 percent of the buildable land.)

This constitutes a dense concentration of people relative to many American cities. But with 81 dwellings per acre, the complex doesn’t pass the marker of 100 dwellings per acre that Jane Jacobs thought required for vibrant neighborhood activity. It’s about half the residential density Jacobs recorded in nearby Greenwich Village (itself never a poster child for residential density).

Although Manhattan has gotten taller in the last hundred years, it has (like nearly every city in the developed world) gotten much less dense. Why? One major factor is wealth: Manhattan is richer than ever and rich people take up more space. (Between 1974 and 1996, as Madrid grew wealthy, the built area of the city expanded by 50 percent, though population hardly budged.) Another is transit infrastructure: proximity has lost its primal importance. A third is culture: millions of Americans elected to trade cramped city apartments for suburban houses.