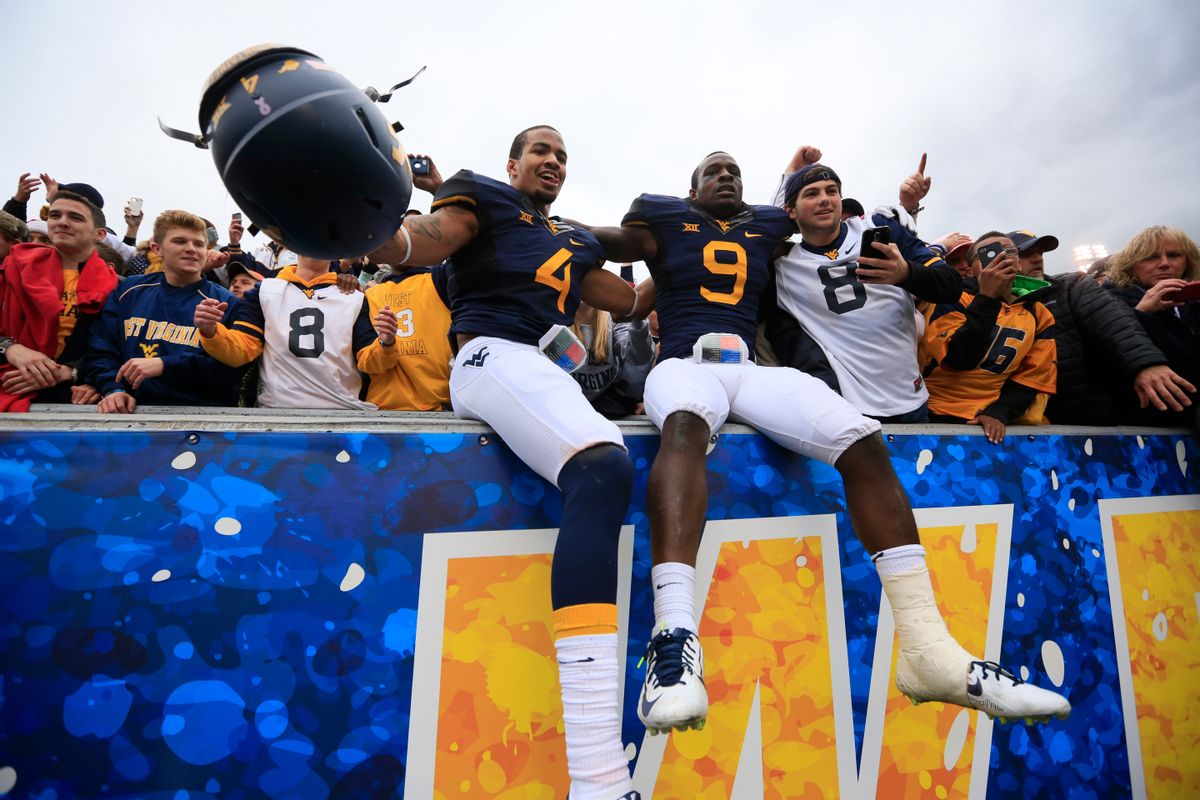 Trickett threw two of his three touchdown passes in the fourth quarter, White had a pair of TD catches and West Virginia surprised sloppy No. 4 Baylor 41-27 Saturday.

The Mountaineers (5-2, 3-1 Big 12) surpassed their win total of last season and beat a top five opponent for the first time since defeating No. 3 Oklahoma in the Fiesta Bowl after the 2007 season.

West Virginia had lost to Alabama and Oklahoma earlier this season when the Crimson Tide and Sooners were ranked in the top five.

"We've been in this situation before and have been unable to finish," West Virginia coach Dana Holgorsen said. "I told them at halftime, we're not in this thing to finish close again. Let's go out there and win this thing."

It marked the second straight game that West Virginia came up strong in the end to put away an opponent.

A week ago, the Mountaineers came from 14 points down with 7 minutes left to beat Texas Tech on the road on a last-second field goal. Trickett and White combined for a TD pass late in that game, too.

Against Baylor, Trickett went 23 of 35 for 322 yards, his eighth straight 300-yard game going back to last season.

White, the nation's leading receiver, had eight catches for 132 yards and two scores. He broke the 1,000-yard mark for the season and extended his streak of 100-yard receiving games to six.

Covering White was frustrating for cornerback Xavien Howard, who was called for four of Baylor's seven pass interference penalties.

"This is by far the craziest game I've ever played with all those pass interference calls," White said.

West Virginia sacked Baylor's Bryce Petty four times and limited the Bears to one touchdown after halftime. Petty finished 16 of 36 for 223 yards and two first-half scores.

"I never felt like we were out of control or anything along those lines," Baylor coach Art Briles said.

The Bears couldn't overcome a double-digit deficit as it did in a 61-58 win against TCU last week.

Baylor (6-1, 3-1) goes from being the Big 12 favorite to a team hopeful to stay in contention for the College Football Playoff, tossed into the mix with the other one-loss teams who now have no room for error.

This was hardly the point-a-minute, yard-busting matchup of the past two years, when the winning team each time reached 70 points.

Baylor entered the game as the nation's most prolific offense but was held to 318 yards, 305 below its average and the lowest total of the season.

"I think that's something that nobody thought we could do," Holgorsen said.

Shock Linwood scored Baylor's only touchdown of the second half on a 1-yard run with time winding down in the third quarter that tied the score at 27.

But it took Baylor three tries from inside the 2 to get into the end zone. Linwood, the Big 12's rushing leader, was limited to 69 yards on 21 carries.

Mario Alford capped the scoring with 7:35 left, lining up in the slot and turning a short pass from Trickett across the middle into a 39-yard TD.

Down two touchdowns, Baylor then drove to the West Virginia 10, but Jay Lee caught a pass from Petty out of bounds in the end zone and the Mountaineers took over on downs.

West Virginia lost both of its starting cornerbacks to injuries in the first half.

Neither Chestnut nor Worley returned. West Virginia also lost leading rusher Rushel Shell, who came up limping in the first quarter and remained out for the rest of the game.