Jason Schwartzman on why he keeps playing neurotic authors

The actor talks "Listen Up Philip," identity crises and the gravitational pull of misanthropes 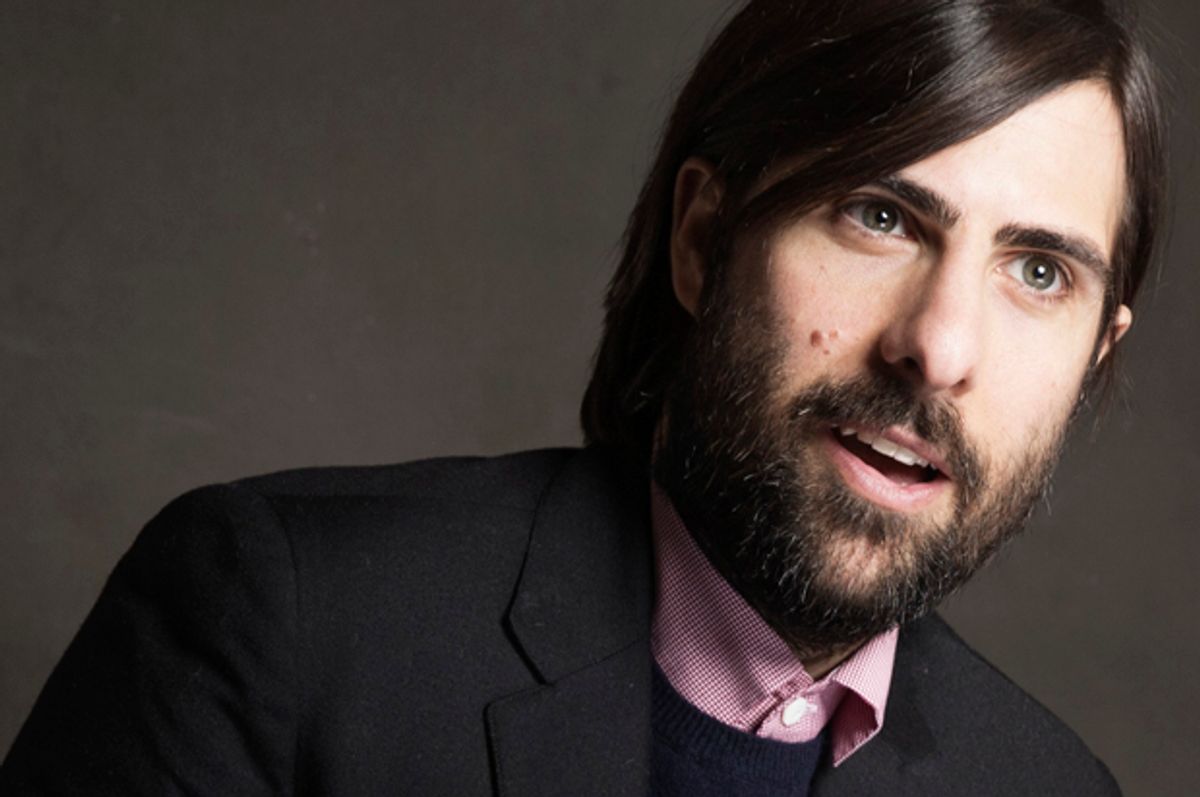 Jason Schwartzman has carved out a nice little niche playing insecure, anxiety-riddled authors. From the fictional, floundering Jonathan Ames in “Bored to Death” to the heartsick Jack in “The Darjeeling Limited” (which Schwartzman wrote with Wes Anderson and Roman Coppola) to the abrasive titular novelist in “Listen Up Philip,” Schwartzman nails the neuroses of the lonely, isolated world of writers. Philip is a tricky balancing act, as writer/director Alex Ross Perry (“The Color Wheel”) essentially dares the audience to spend time with Philip, a young New York author riding the steam from a successful debut, and essentially dismantling all efforts toward sophomore commercial success. In the process, Philip alienates his girlfriend (Elisabeth Moss) and nearly everyone else with his self-righteousness and egotism. But Schwartzman softens the character's poisonous humor and self-destructiveness with his typical boyish likability and quiet charisma.

Do you think Philip finds redemption in his journey?

Redemption? That’s a big word and probably not. Alex said to me when we first started doing the movie, “Don’t think of Philip as a writer. Think of him as an asshole.” I was like, “OK” [laughs]. I admired him. My first reading of the script is probably exactly what your first viewing of the movie was like, which is kind of like you can’t believe someone could be that way, and how do you feel about that? I didn’t really like the guy my first time. I was like, “What a dick.”

He was placed in a world that kept me in its gravitational pull, and I couldn’t stop thinking about it. Oddly enough, this idea of redemption is so interesting because that’s something that I feel like in movies, at least I am, wanting or conditioned to see in modern movies one of the main guys learn something. He figured it out, or rides off into the sunset. I came to New York a month before shooting and sat with Alex every day. We talked about all that stuff, and messed around with versions of Philip where maybe there’s a moment that makes him sympathetic or less abrasive. We were open to trying different things, but when we did, they worked against the goal of the movie, and against Philip. Instead of making him more likable, it made him more detestable and he ended up becoming passive-aggressive.

I love playing him because I think it’s much more honorable to be direct. With most people’s feelings, it’s kind of like champagne or wine. You don’t know where you stand with them. You can drink champagne, you’re having a great time and it tastes like alcoholic soda. The next thing you know you’re sick and feel terrible. Vodka is more astringent, you drink less of it but you feel it immediately. That’s like Philip. You know where you are.

I was at the film’s L.A. Q&A screening with Bret Easton Ellis. It seemed like you and Alex bristled a bit when the moderator described Philip as a misanthrope.  Has that been a common reaction?

I bristle really at nothing. He is and he isn’t. I think he does have redeeming qualities. Clearly he’s trying, but I think that he’s just in a really bad place in his life. He’s on a bit of a downward spiral and not treating people well. He’s mishandling the success from his first book and is unapologetic about it. I think he’s definitely going to get his comeuppance at some point. He can be a prick and sometimes a bit of a brat, but I didn’t want him to be a brat, and I’m glad he didn’t come off as even more bratty. I think the reason why is because he’s not sugarcoating anything. So misanthrope? I don’t know. He’s a writer! He’s lonely. Part of the story is about solitude and people that are lost in their own heads and worlds. It’s portraits of loneliness. Writing is at the top of that list occupationally. He is a misanthrope in that way, and is a lonely man. It’s not helping with his social skills, for sure.  He does seem to do very well with the ladies. The wall in the production office had a picture of me, Jonathan (Pryce) and all the people from the movie. Beside me are eight women, and they’re all beautiful, intelligent, incredible creatures and it was like, “Fuck. What the fuck? How did Philip do that?”

In your personal experience, have you had many interactions with real-life authors?

What I think was fun about the writers I’ve played is they’re sort of different. In the Jonathan Ames character, and I just realized I play a writer in “The Darjeeling Limited” as well, they slide into the writer who is struggling to write and have success. Those guys would be jealous of Philip. His book was published and well-regarded. It was a minor hit, which is really a big hit. In the movie, we don’t really have any scenes of him going, “What am I gonna write about?” I think that’s an interesting choice. Instead of being a writer who can’t find anything to write about, he’s probably going through a notebook a week, full of stuff that’s maybe good or bad. But he’s seriously going at it. I know Jonathan Ames, not only know him, but he’s one of my closest, best friends in the world. The amount of alone time that a writer must endure is clearly different than acting or music. You can say, “I’m in a band but I write all these songs alone,” but at a certain point you’re probably going to go tour. If you’re a writer, sometimes they’ll go tour but it’s pretty lonely. Paul Auster had some line, and I’m paraphrasing, “Every great work of art is the result of someone’s solitude.” Jonathan Ames told me that quote, I think.

You and Elisabeth Moss share some really vulnerable moments together. How did you prepare to get in that head space?

I came to New York a month early, because I’m basically a slow learner. I spent a month with Alex and we talked about the script every day. I also have a bad attention span, so it was good to spend time with him, wander off, and let our conversations take us to strange places. We went to bookstores together and talked about writers. Elisabeth came 10 days before because she was working on something else, and she’s just a different type of creature altogether. She’s an insanely amazing actor. I came and asked one month’s worth of bad questions. She came and said, “So I was thinking this and how about this?” and everything was right. It was like, “Fuck, how does she do that?”

Have you ever experienced a crisis of identity, or a Philip moment in your own life?

Yeah. Somewhat all the time. I don’t mean it in a bad way, like I’m walking down the street unsure of who I am. Working is so fun and so great. I love it, and I put so much into it. Any time you’re done with work or a movie, it’s such an odd way of life. Your normal way of life is at a certain pace, and working on a movie is so different. With the amount of talking and repetition, after that there’s always a moment of, “Huh. What now? What becomes of this?” Not just because of acting, but I think it’s a natural way to be. Especially amongst my friends, everybody’s just trying to figure it out.  There’s a rare few that are totally at home in their feet, just walking around. They understand it’s hard, but they know it and they got it. Most of the people that I know, it’s probably needless, but they’re restless.

I can only gauge what I saw from Alex Ross Perry at the panel, but what I got was that he’s pretty outspoken and self-confident.

He’s someone I admire because one difference between Philip and I, or me and Alex, not to say that he’s Philip, but they share this and I don’t: If Paul McCartney said to me, “Come out to my country house, hang out and write some music,” I would find a way to not do that. Whereas Alex would say, “Yes, absolutely. I’d love to.”  I admire that. It’s not a fearlessness, but he’s dreamt of making movies. He’s always wanted to make movies, and he’s getting to make movies. He feels like, “This is fucking incredible, and I’m not going to apologize or feel weird about this. I’m getting to do what I’ve always wanted to do.” He’s not going to waste his breath worrying about all that other stuff. It’s like with Bret Easton Ellis. I said to Bret, “Was there anyone you were afraid to meet?” and he just said, “No.” That’s like an Alex line.

Do you have that “Never meet your heroes” fear?

I would not voluntarily go up to someone that I admire and tell them that I love them. On the flip side, if I was seated next to them on a couch, I don’t know where this couch would be, and Paul McCartney was there, I would start to gush. I was talking to Alex when we were at the Locarno Film Festival and Roman Polanski was supposed to be there. There was a dinner, and we were all invited to it. I couldn’t go, but I said to Alex, “Are you going to meet him?” He said, “Am I going to meet him? I’m only going to dinner to meet him. I’m going to walk right up and say, ‘Mr. Polanski, my name is Alex Ross Perry and I’m a filmmaker with a movie in competition here. You changed my life and I want to thank you for that.’” I was like, “Wow, that’s fucking awesome.”

In that same vein, do people approach you on the street quoting Max Fischer?

It depends on the city. It’s cool because this time in my life, I’m 34, so there’s a generation of teenagers seeing that movie now for the first time. Teenagers will come up and say that the movie means a lot to them. I relate to those people because, even though I just said I’m not the kind of person to just approach someone, if I were to go up to someone, it would be someone who is in movies or music and it would be because they were a part of something that made me feel good. When someone comes up and says something to me it really means a lot. Especially a teenager, because that’s such an important time when you’re reaching out for things that strike a chord in you.

What are you listening to at the moment? Anything blowing your hair back?

Are you most comfortable in front of the camera or composing music?