The federal government lost its war against Cliven Bundy

Six months after the standoff in Nevada, officials have failed to issue either an arrest or an indictment 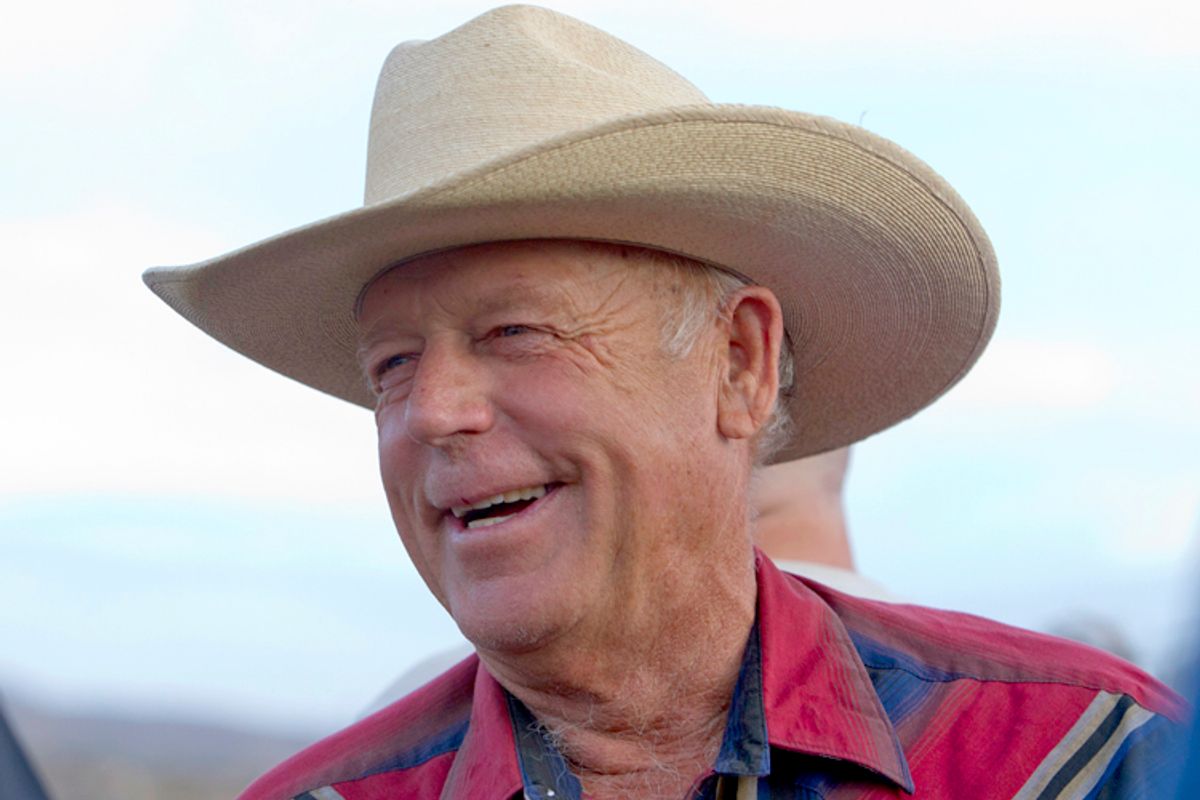 It has been six months since the federal government called off its attempt to round up cattle belonging to Nevada rancher Cliven Bundy amid a tense standoff with heavily armed militiamen who trained their weapons on federal agents.

For weeks prior, the antigovernment right had been portraying a federal court order to remove Bundy’s herd from public lands as a prime example of federal overreach – even though Bundy had refused to pay more than $1 million in accumulated grazing fees and fines because he said he didn’t recognize the government’s legitimacy.

Militias from around the country responded to Bundy’s plight, hoping that in that tiny corner of the desert they could make a stand against the government they see as the enemy. And when the Bureau of Land Management (BLM) abandoned the operation to avoid a bloody shootout, they declared victory.

Government officials promised accountability for those who broke the law by taking up arms against federal agents. It seems unfathomable, in fact, that the U.S. Department of Justice would allow a mob of antigovernment zealots to get away with using the threat of violence to block the enforcement of the law.

But, as the months have dragged on, there has been no response. Not an arrest. Not an indictment. Nothing.

Speaking with National Public Radio a month after the standoff, BLM Director Neil Kornze promised the agency would work through the legal system. “I can’t say a lot because there’s an active investigation going on, but we are working hard to ensure that those who did break the law are held accountable,” Kornze said.

The Clark County, Nevada, Sheriff’s Department has said an investigation is under way, as has the FBI. But as that investigation drags on, militias have turned the Bundy family ranch into an armed compound ready for a ground war with the Feds, and Bundy has gone on the lecture circuit to claim victory against the government.

Just last month, speaking at a gathering billed as “An Evening with Cliven Bundy” in Nevada, the embattled rancher, now a hero to the radical right, again reiterated his defiance and disdain for the federal government.

“I was really surprised that they would go this far to put their guns down we the people’s throat and try to show the public, the world, the federal government has unlimited power over we the people of the state of Nevada. That isn’t right, and that’s not ever going to happen again in America or in the state of Nevada,” a television station quoted Bundy saying.

Bundy’s confidence has risen no doubt because there have been no consequences for his actions or for those who came to his defense.

What has been equally surprising, however, is just how deeply the Bundy family has become part of the radical fringe since the April 12 standoff.

Bundy abandoned the GOP in favor of the Independent American Party of Nevada, which champions the idea of returning to the gold standard and frequently offers conspiracy theories about the United Nations and its Agenda 21. He has spoken to numerous far-right media outlets, touting his success in turning back the federal government as a victory for what the radical right frequently calls the “cause of liberty.” Members of his family have even become lifetime members of antigovernment groups like the Constitutional Sheriffs and Peace Officers Association, former Arizona sheriff Richard Mack’s conspiracy-minded group composed of right-wing sheriffs who promise to keep federal aggressions at bay.

In recent months, Bundy himself has burrowed much deeper into the radical right than that even.

Hatewatch has learned that Bundy, alongside Mack, participated in a conference call with the Republic for the united States of America (RuSA), a “sovereign citizen” group whose members believe the federal government is an illegal corporation designed to enslave citizens. Its members have been involved in violent interactions with police, run-ins with the Internal Revenue Service and widespread harassment of law enforcement.

And, in a July report, the Department of Homeland Security described a recent spike in antigovernment violence and noted that the “perceived success” of militias at the Bundy ranch “likely will embolden other militia extremists and like-minded lone offenders to attempt to replicate these confrontational tactics and force future armed standoffs.”

The truth of the matter is that until there is action holding those who broke the law accountable, it is likely that the current wave of antigovernment extremism will only continue to pick up speed.