America's locker room culture: What sports shares with our most powerful institutions

The "Friday Night Lights" author takes on locker room mentality, and gets at something crucial about male privilege 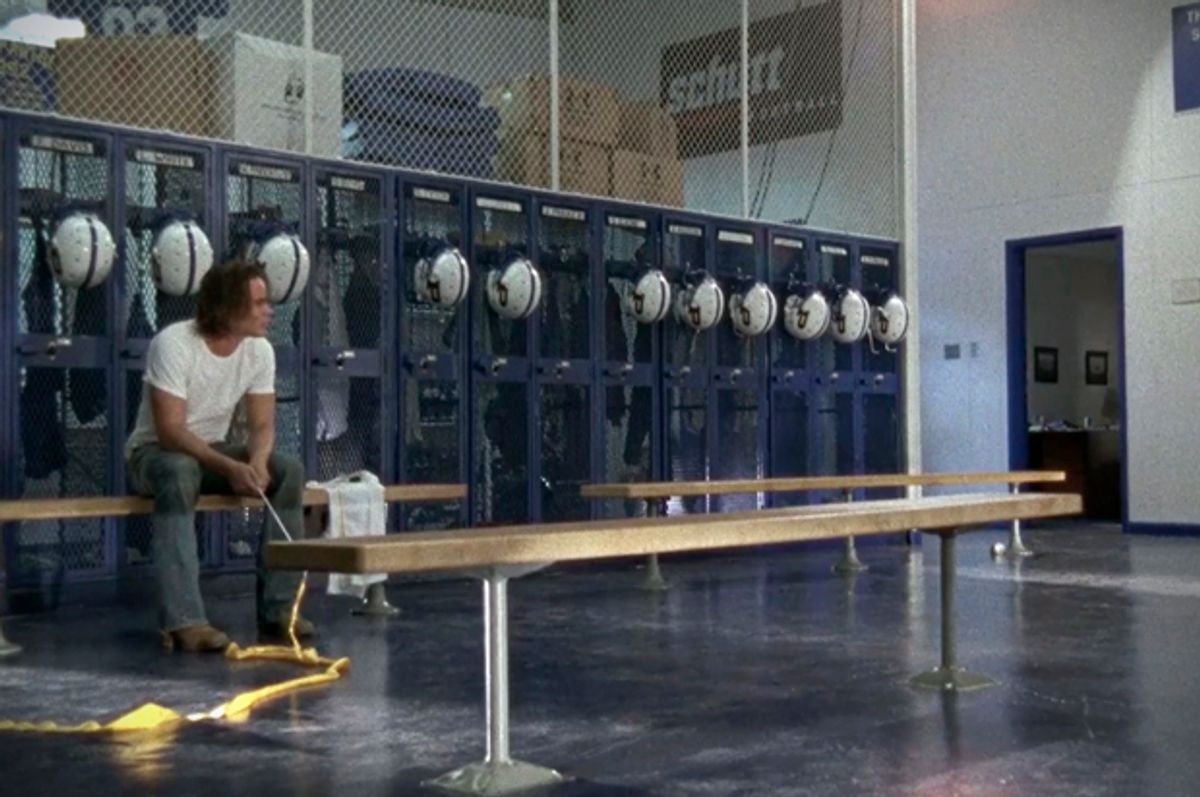 This weekend, "Friday Night Lights" author Buzz Bissinger had a piece in the New York Times on sports culture and the dangers of the "cocoon of insularity" that characterizes locker rooms from high school athletics departments all the way up to the elite clubhouses of professional sports. "In too many clubhouses and locker rooms across the spectrum of high school and college and professional sports, there is not even the pretense of such engagement [with the real world]," Bissinger wrote, citing the pains taken to isolate these boys and men from so-called distractions, from unwrapping gum for players to quarantining them from news coverage not related to their chosen sport.

This is perhaps an obvious point, and it's certainly been made before by people who carry less Mitt-Romney-endorsement baggage than Bissinger. But the thing that struck me is that, intentionally or not (I'm going to wager it's more the latter), Bissinger also managed to get at something particularly insidious about male privilege. The "willful ignorance" that Bissinger argued is all but required to keep teams sufficiently focused -- on the game and on profits -- is exactly the thing that keeps patriarchy humming along so nicely.

Read interviews with the wives and girlfriends of professional athletes and the insularity that has proved so dangerous for women becomes clear. “You get brainwashed. It’s so ingrained that you protect the player, you just stay quiet. You learn your role is to be the supportive NFL wife,” one woman who was previously married to an NFL player told the Washington Post. And the "game above all" mentality isn't just a product of coaches and league executives. It's reinforced in the communities that surround these institutions. The Tallahassee Police Department's alleged misconduct around the Jameis Winston rape case was in the service of the same goal -- to keep the game going, to keep the money flowing, to keep the players happy, to keep everyone else quiet.

With each new story that further exposes this pattern, I'm reminded again of Jessica Luther's observation that the NFL's domestic violence problem was "the direct result of a whole lot of men being in charge of a whole lot of men.” This self-isolation and willful ignorance isn't just the stuff of locker rooms and billion-dollar sport franchises. Coaches for the St. Louis Cardinals may, according to Bissinger, be removing all sections of the St. Louis Post-Dispatch except for the sports page before putting the papers in the locker room, but the rest of our culture is doing its damnedest to shelter boys and men from the encroaching realities of the rest of the world, too.

A few hours after reading Bissinger's piece, I watched the broadcast of Ruth Bader Ginsburg's appearance at New York 92 Street Y. Speaking about the three-year period during which she was the only woman on the court, Ginsburg said, "It was very lonely." Ginsburg isn't the only woman on the court right now, but it's easy to imagine her colleagues sharing in her sense of isolation as their male colleagues -- in a cocoon of their own -- join together to, say, dismiss the concrete benefits of affordable access to birth control in favor of a perceived harm experienced by powerful business owners.

Reflecting on her time as the only woman on the court, Ginsburg explained, "It wasn't the way the court should be at this time in our history."

The same could be said for most of our institutions. That far too many exist in cocoons of a different sort. Particularly as we debate issues that are essential to women's equal standing in society -- reproductive freedom, a living wage, access to food and housing, education -- the very makeup of these institutions means they are often woefully limited in their perspective on each. Congress simply should not look the way it does at this time in our history. The NFL should not look the way it does. The athletic departments overseeing high school football teams should not look the way they do. The boardrooms of major corporations should not look the way they do. While we continue to talk about the locker room culture that has proved toxic, dangerous and deadly, it's equally crucial that we apply this standard to the rest of our culture. That we talk just as critically about all of the places where a whole lot of men are making choices that serve the interests of a whole lot of men.