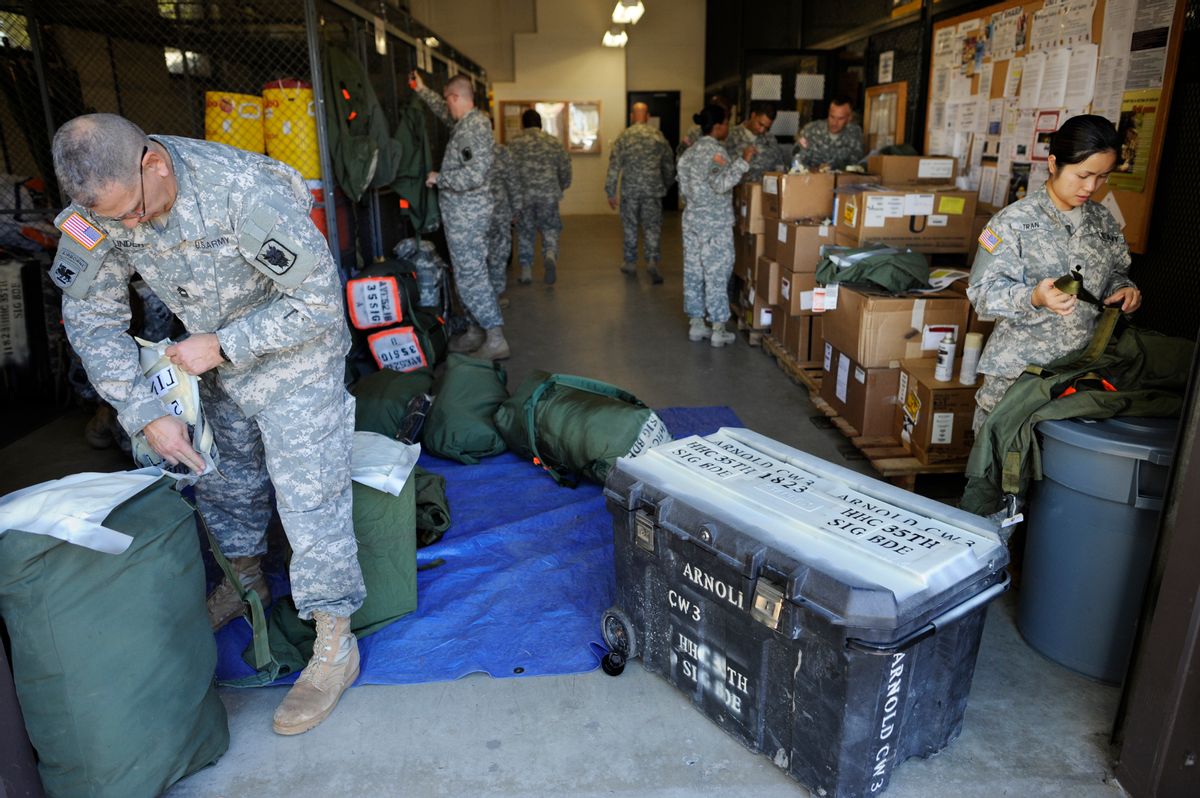 Soldiers from the 35th Theater Tactical Signal Brigade pack their gear as they prepare for deployment to west Africa to aid against the spread of the Ebola virus in Fort Gordon, Ga., Monday, Oct. 20, 2014. (AP Photo/The Augusta Chronicle, Michael Holahan) (AP)
--

1. WHO'S SEEKING TO BUILD NEW COALITION

After rallying dozens of nations to fight Islamic State militants, President Obama is back in the coalition-building business — this time to fight the Ebola outbreak in West Africa.

2. US AIRDROPS ARMS, AMMUNITION TO KURDISH FIGHTERS IN SYRIA

The supplies follow weeks of airstrikes by a U.S.-led coalition in and near the embattled border town of Kobani, besieged by Islamic State militants.

Darren Vann, 43, is suspected in the strangulation of 19-year-old Afrikka Hardy, and could face charges in the deaths of six more women in northwest Ind.

4. WHAT RECORD EARTH IS ON PACE TO TIE OR BREAK

"It's pretty likely" that 2014 will be the hottest year since 1880, when record keeping began, says National Oceanic and Atmospheric Administration climate scientist Jessica Blunden.

Rather than demanding repeal of the health law, the Republican governors generally have sought federal concessions to make their decisions more politically acceptable at home.

Colorado health authorities first suggested banning many forms of edible marijuana, then backed down, since the state's 2012 marijuana-legalization measure says retail pot is legal in all forms.

Jesse L. Matthew Jr., accused in the disappearance of 18-year-old Hannah Graham, has been charged with sexually assaulting a woman in suburban Washington, D.C., in 2005.

Excitement for the new iPhone 6 and 6 Plus models spark the record sales.

9. PISTORIUS WILL FINALLY LEARN HIS FATE

On Tuesday, a judge will announce the sprinter's punishment after finding him guilty of culpable homicide for killing girlfriend Reeva Steenkamp.

Going into Game 1 on Tuesday night, both teams will deal with a familiar issue this deep in the postseason: Does an extended layoff translate into rest or rust?