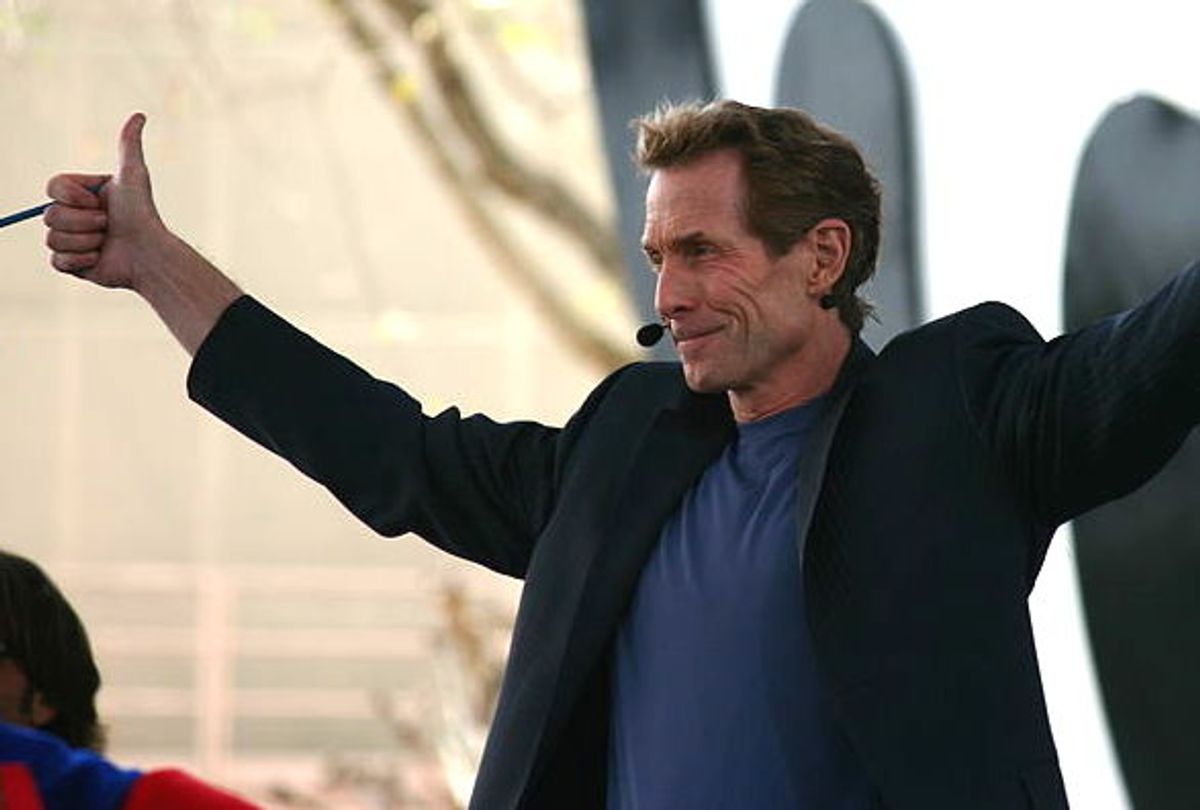 A quick reminder: Football has a violence against women problem. So do other professional sports (for instance, basketball). And so do the networks that discuss those professional sports (for instance, ESPN). A quick example: On Tuesday's edition of "First Take," ESPN's Skip Bayless went out on a limb to suggest that NBA star Kobe Bryant benefited from the sexual assault charges he faced in 2003, saying the alleged assault made Bryant's personal brand "sizzle."

“Remember Kobe pre-Eagle, Colorado?" Bayless asked. "He failed in his first sneaker deal because he was just too clean cut, and I think it was Adidas that had him first -- correct me if I’m wrong -- but he couldn’t sell sneakers because he didn’t have enough edge. But then post-Eagle, Colorado it brought a little attention to him, like it gave him a little bit of sizzle.”

Bayless, whose comments elicited a look of complete horror from  host Cari Champion, isn't the only one of the show's contributors to offer inane, misguided thoughts on the topic of violence against women. In July, "First Take" regular Stephen A. Smith was suspended from the network for suggesting women take responsibility for their actions to "provoke" domestic violence. After returning to the show in September, Smith had what might be most aptly described as an on-air meltdown over the blame directed at NFL Commissioner Roger Goodell for his failure to adequately investigate domestic violence charges against running back Ray Rice.

But back to Bayless. In addition to taking a tone deaf approach to reflecting on Bryant's sexual assault case, Bayless was also wrong. As Awful Announcing notes, the sexual assault charges did little to help Bryant's brand at the time, and actually seemed to hurt him. The player lost several key sponsorships, with the exception of Nike, which didn't use Bryant in public advertisements for two years after the charges were filed. When Bryant did start selling sneakers -- when he began to "sizzle," as it were -- it was only after Nike pushed a massive campaign to endorse his brand, after the charges were dropped.

The problem with Bayless' comments is one that transcends locker rooms to the television studio. It's one Fox Sports host Katie Nolan has called out before: Sexism endemic to the entire realm of professional sports, including the media that cover it. The players, the team executives, the leagues they represent and the commentators who make a livelihood discussing them feed on each other. And until someone calls out the problem -- which, for the record, ESPN hasn't been so terrible about doing -- nothing is doing to change, and professional sports will continue to have a violence against women problem.

Watch Bayless' comments, via ThinkProgress, below: