"I wonder if all the white teens in St. Louis County that smash pumpkins on Halloween will face arrest" 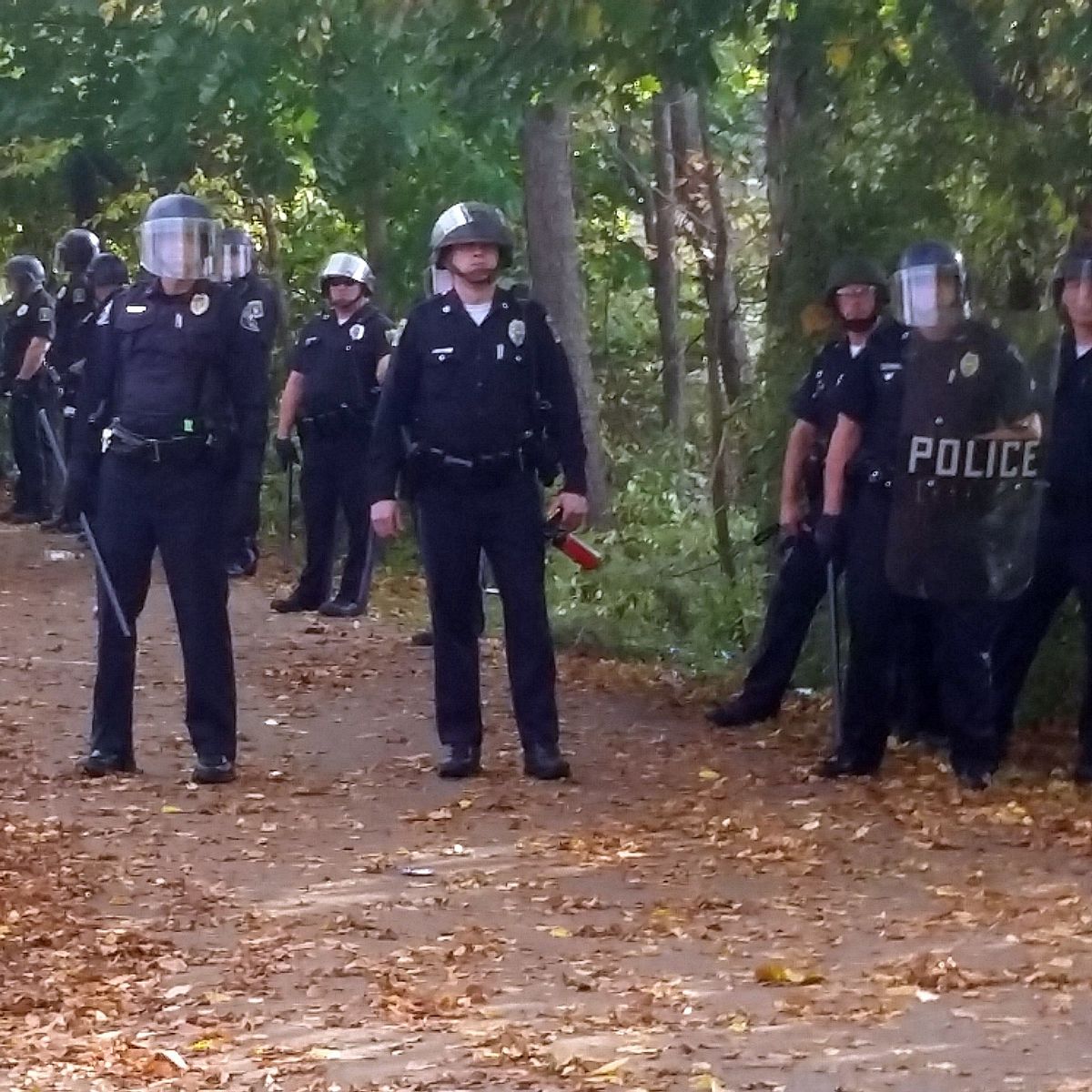 In this photo provided by Seth Meyer police officers line up. Local police, firefighters and ambulances in New Hampshire responded to large crowds of students as the annual Pumpkin Festival is underway near Keene State College Saturday, Oct. 18, 2014. (AP/Seth Meyer)
--

On Monday afternoon, 10 protesters approached the St. Louis County Justice Center with a wagon full of pumpkins on which they had written "RACISM," "WHITE PRIVILEGE," "HATE" and "POLICE BRUTALITY."

After protest organizer Derek Laney vocally condemned the shooting of unarmed teenager Michael Brown, he threw a pumpkin to the ground, where it splattered before the feet of several officers. He and two other protesters were arrested.

"We are going to smash [pumpkins] symbolically at the foot of someone who can bring [the Brown] case to justice," said Laney. "It's another way to let people know we will be heard."

Laney said the staged event also hoped to draw attention to the disparity between the portrayal of the nearly 50 white college students arrested Friday at the annual Keene, N.H. Pumpkin Festival and the characterization of the disruptions in Ferguson following Brown's shooting.

The Keene State University students, he noted, were described as "unruly," "causing a ruckus" and "drunken revelers" while the Ferguson demonstrators were identified as "rioters" and "thugs."

"We're using that as a jumping off point to insist on justice for Mike Brown," said Laney, an organizer with Missourians Organizing for Reform and Empowerment.

According to Clayton Police Chief Kevin Murphy, Laney was arrested and charged with assault because it seemed like the pumpkin was going to be thrown in the "direction of officers arresting another person."

The riot at the Keene Annual Pumpkin Festival on Saturday night required police to employ riot gear, tear gas, pepper spray and a response from the governor's office. Yet, as Laney said, the response from the public amounted to a chuckle and muttering of, "Kids will be kids." The difference between the public response to Keene and Ferguson provoked scoffs from the Internet.

"I wonder if all the white teens in St. Louis County that smash pumpkins on Halloween will face arrest," said Laney.