Ebola's grim original secret: How capitalism and obscene military spending got us here

It's time to look at America's perverted sense of death, health and prevention -- and how we're spending our money 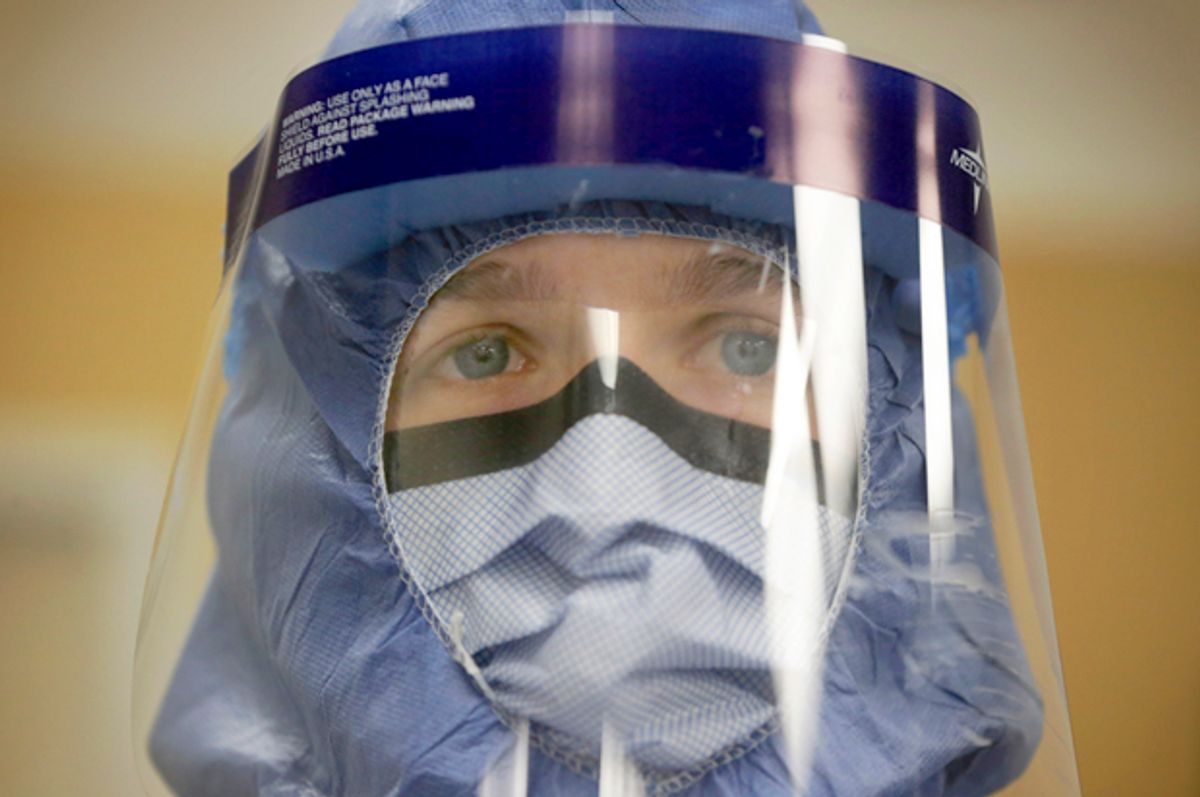 This week stateside, the edge may be off the Ebola story for the U.S. news media, as those people in Dallas who were close to the late Thomas Eric Duncan emerge from their 21-day quarantine. The Obama administration has appointed an Ebola czar and the military is pulling together a kind of infectious disease SWAT team that can helicopter in the next time a "world-class" American hospital fumbles an Ebola case.

What a human tragedy it will be if we fail to grasp what are the existing pre-conditions that set the stage for this unprecedented global outbreak of Ebola.

Missing from the wall-to-wall coverage of the global Ebola crisis is a root-cause analysis that shows how unfettered free market global capitalism and our obscene spending on the military both play a part in creating the environment for this latest outbreak and the ones that are sure to follow.

No missile killed them, but our greed and global death-oriented spending priorities have left fingerprints on all these bodies.

Here in the U.S. we spend close to $700 billion on the military annually, roughly 20 percent of the federal budget, equivalent to just under $2,500 per capita. Contrast that with our foreign aid for things like public health where we part with just $19 billon, or .6 percent of the federal budget, just $61 per capita. Twenty other nations actually give a higher percentage of their gross national product in non-military aid to nations in need than we do.

Our military spending squeezes out so much that needs to be done both at home and abroad. And there are lost opportunity costs of not doing what needs to be done, like seeing to it that places like West Africa, the epicenter of the latest Ebola outbreak, have a basic public health infrastructure.

This latest global pandemic shows just how yesterday our “homeland security” threat–based security matrix is. In the jet age of hop-and-a-skip Ebola, it feels fatally provincial. Ultimately, our essential homeland is planet Earth.

As President Obama does his best to shift back and forth from commander in chief of the war on terror to global public health advocate, he is going to find maintaining the public’s trust, both here and abroad, essential but difficult. For quite a while now the U.S. brand has been tied to its myopic prosecution of the the war on terror, even if it killed innocent civilians and put the global public health at risk.

How else does one explain the CIA’s fraudulent use of a public health vaccination program in Pakistan to harvest DNA from households they suspected of harboring Osama bin Laden? As a direct consequence of the CIA’s subterfuge bin Laden supporters targeted several public health workers administering polio vaccination for assassination.

Although that particular CIA strategy did not help the U.S. achieve its ultimate goal, there was major blowback. The U.N. had to shut down its polio eradication efforts in Pakistan, one of only a handful of countries in the world at the time where wild polio transmission still happens. So severe were the potential consequences that in January of 2013 deans of the 12 leading American schools of public health wrote President Obama directly, taking the CIA to task. “This disguising of an intelligence gathering effort as a humanitarian public health service has resulted in serious collateral consequences that affect the public health community,” read a press release put out along with the letter.

A week later Lisa Monaco, the White House’s top counter-terror and homeland security expert, wrote back pledging the CIA would not repeat the ruse.

But the damage may have been done, especially in the parts of the world where U.S.-based pharma multinationals' vaccination products have long been viewed as suspect and with the same skepticism expressed by vaccination opponents stateside. By in the spring of this year the World Health Organization was reporting a resurgence of polio centered in the Middle East and Africa that “constitutes an extraordinary event and a public health risk to other States for which a coordinated international response is essential,” WHO warned the world. “If unchecked, this situation could result in failure to eradicate globally one of the most serious vaccine preventable diseases.”

For global context, keep in mind that in 1979 polio had been eradicated in the United States, but experts say maintaining that status requires high vaccination rates here and an aggressive program around the world. In an increasingly mobile world, the Centers for Disease Control warns that without a coordinated international effort “scenarios for polio being introduced into the United States are easy to imagine."

No doubt this reality creates a dynamic tension between public health and commerce that is so present in the current "fly–no fly" Ebola debate. We have a media-induced near religious belief that only through unfettered global free trade and travel can a brighter tomorrow dawn. We think we have conquered the natural world but it can still kick us in the ass with fatal results. We have failed to grasp even the basic consequences of the mobility many of us take for granted. We are blind to the social and ecological costs exacted on the people of Africa by transnationals in the hot pursuit of everything from bauxite to crude oil.

Despite our 21st century genius we lose jet airliners and killer epidemics can percolate for several months in remote places like West Africa, impoverished by an extraction industry like the mining of bauxite used to make the aluminum we need for the planes we fly and the latest high-tech gadgets we depend on to stay connected. Our pressing question all too often is, Can we get an upgrade?

Suffice to say most Americans have no idea where this virulent Ebola strain has come from or how many people it has already killed. Media figures vary. Laurie Garrett, an analyst with the Council on Foreign Relations, told the PBS News Hour this week that for the first time officials at the World Health Organization had conceded the “bad news” that they had no real data from Liberia. Garrett says she estimates the actual Ebola death toll is between 15,000 and 16,000 deaths.

There is expert consensus that the Ebola tide has to be turned where it originated. We can’t just hermetically seal our borders.

According to the World Health Organization, “ground zero” for the outbreak was “in the remote Guinean village of Meliandou” where the borders of the West African nations Guinea, Liberia and Sierra Leone all meet. The first fatality, according to WHO, was a 2-year-old boy who died two days after he became sick around Christmastime of last year.

Within a matter of weeks his 3-year-old sister, mother and grandmother all had succumbed to what was still at that point a mysterious disease to the local doctors who were unfamiliar with Ebola because it had previously been only associated with countries in Central Africa. In one of the most medically underserved places in the world, local doctors were all too familiar with the regular outbreaks of infectious diseases like cholera and malaria but were baffled by what they were facing.

“Following the young boy’s death, the mysterious disease continued to smolder undetected, causing several chains of deadly transmission,” according to WHO’s account. “Who could have ever guessed that such a notorious disease, previously confined to Central Africa and Gabon, would crop up in another distant part of the continent?”

It was not until March of this year that WHO officially posted the Ebola outbreak advisory. For months there was lots of public health hand-wringing. Experts were lured into complacency when local outbreaks seemed to wane, only to resurge with a vengeance, decimating a part of the world that, despite its great natural resource wealth, lacks basic public health infrastructure.

For Africa in the age of unfettered global capitalism, the leverage is still with transnational corporations that can easily exploit the corruption and political instability that grips so much of the continent. “With 24 percent of the world’s infectious disease burden, Africa has only 3 percent of the world’s health professionals, with massive shortages of physicians, nurses, technicians, health administrators and planners,” writes Jennifer Cooke, author of “Public Health in Africa.”

Any effort at coming to understand Ebola has to be pursued holistically. As reported earlier this month in the Digital Journal, there are expert estimates that West Africa has lost as much as 90 percent of its virgin forest lands to human activities including farming and mining.  Scientists believe there is a corollary between deforestation and the increasing frequency and severity of Ebola outbreaks.

Ebola is a zoonotic disease, transmitted from animals to people. As the population grows and human settlement expands into the shrinking tropical forests, the local population, which survives off bush meat, is increasingly exposed to the disease present in species like fruit bats and chimpanzees. Such was the conclusion reached in the 2012 report “Ebola Virus Outbreaks in Africa and Present” published in the Onderstepoort Journal of Veterinary Medicine.

At the same time a never-ending cycle of political violence in the region makes it impossible to achieve the stability needed to establish and maintain the public health infrastructure necessary for a traumatized and often at risk population. All too often African leaders decide it's more critical to spend money to buttress their military for their own self-preservation, as opposed to investing in the public health of their constituents. Add into the mix a terrorist group like Boko Haram and you have a civil society constantly under duress.

Historically, for Americans and Europeans, Africa was a place to get slaves, free labor. In modern times it is a place from which we extract diamonds, gold, bauxite, oil, whatever, at the lowest possible price, so as to make the most profit. It is just business. If you can add to your mass consumer market in the process, that’s fine too. But, overwhelmingly, the majority of Africans are left out of the global free trade wealth-creating machine that is fueled by Africa’s natural resources.

As for the U.S., with the fall of the Soviet Union and after Sept. 11, we have increasingly asserted ourselves with drone attacks and strategic military raids in Africa aimed at disrupting terrorist networks.

Despite all the rhetoric about being interconnected it is hard to get the developed world to really have skin in the game over the long term. Yes, President George W. Bush’s focused efforts to spend billions to fight HIV-AIDS in Africa was a bipartisan success that made a difference for millions.

Yet last year the Washington Post reported that President Obama actually became the first president since Reagan to back off the U.S. commitment to fighting HIV-AIDS, slashing hundreds of millions of dollars from the program.

What this Ebola outbreak has to drive home is the reality that U.S. aid to support public health in Africa is not a selfless act of charity but one of self -preservation. Over the decades of African relief ads on late-night TV we may have become inured to the image of starving and disease-stricken children. That’s not to say the world has not made progress. Consider that in 1990 the World Health Organization reported that around the world 12.6 million children under age 5 died. That’s almost two Holocausts a year.

By 2012 that was down to 6.6 million dead children and about half of them were from sub-Saharan Africa. But as we have seen with the death of the 2-year-old in Guinea last Christmas, the loss of just one can have repercussions felt around the world.