Feminists can twerk too: What Annie Lennox misunderstands about Beyoncé

In a discussion about Beyoncé's brand of activism, Lennox told NPR "twerking isn't feminism." I beg to differ 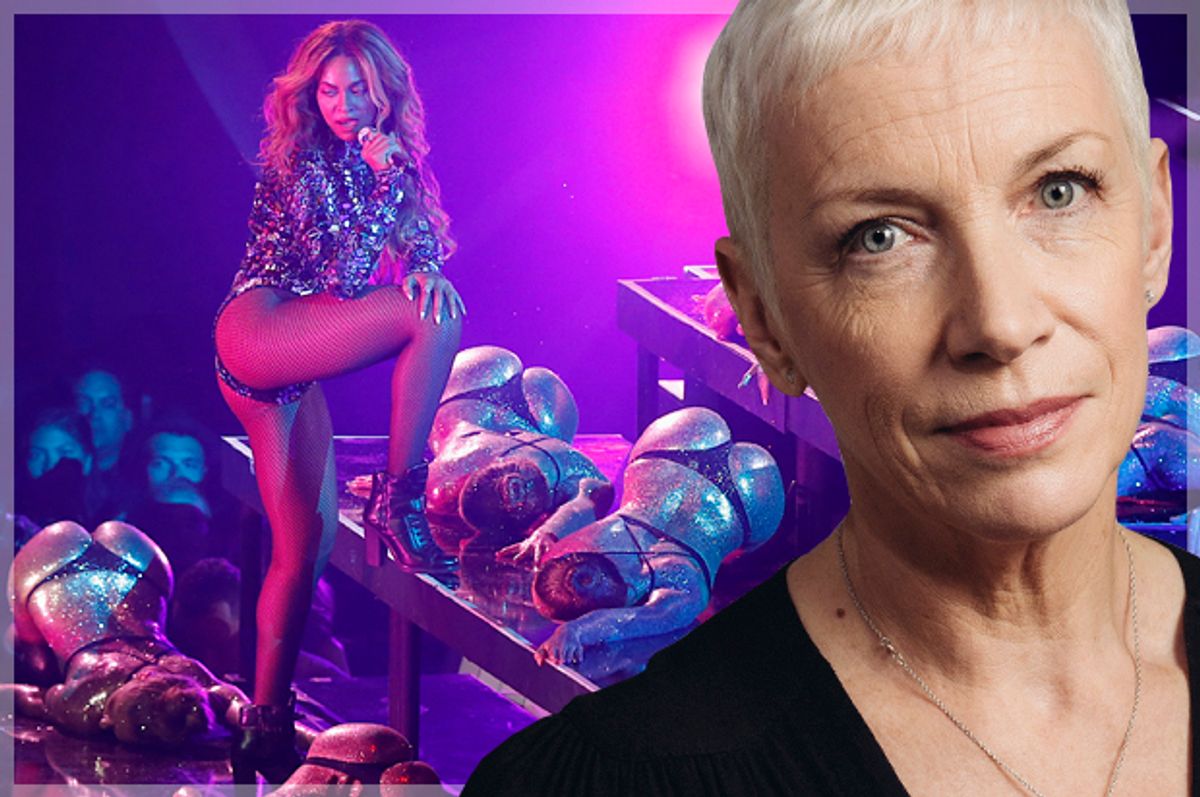 Her remarks arose in a recent NPR interview, after Lennox was asked about her criticism last month of Beyoncé as "feminist lite." She defended her words, explaining, "I was thinking at the time about very impactful feminists that have dedicated their lives to the movement of liberating women and supporting women at the grass roots, and I was saying, 'Well that's one end of the spectrum, and then you have the other end of the spectrum.'" I think we all understand what she's getting at: Beyoncé hasn't dedicated her life to what is often thought of as traditional feminist activism -- although, note that ideas of "traditional" feminist activism have been completely and utterly whitewashed. But, OK, it's true that to my knowledge Beyoncé hasn't organized any feminist marches lately or brunched with Gloria Steinem. I guess that leaves only feminism lite?

Anyway, Lennox will find plenty of disagreement over the degree to which Beyoncé's art is an act of feminism and feminist influence. In response to Beyoncé's recent Video Music Awards performance in front of a screen emblazoned with the word "feminist," Rebecca Traister wrote that it was "the most powerful, and certainly the most highly polished pop-culture message" of her lifetime. Although she added, "That doesn’t mean that Beyoncé Knowles is the single face of feminism, or that she stands in any more sufficiently than any of feminism’s other flawed messengers, past or present," she argued. "But she’s sending a signal, and the fact that that signal is coming from inside the house, the entertainment industry — hell, the fact that Beyoncé herself is arguably the most powerful person in that house — means something that we should all be paying attention to."

Clearly, Lennox is, and she doesn't like what she sees. She went on to explain in the radio interview, "The reason why I've commented is because I think that this overt sexuality thrust -- literally -- at particular audiences, when very often performers have a very, very young audience, like 7 years old, I find it disturbing and I think its exploitative. It's troubling. I'm coming from a perspective of a woman that's had children." She later added, "Listen, twerking is not feminism," she said. "It's not -- it's not liberating, it's not empowering. It's a sexual thing that you're doing on a stage; it doesn't empower you."

Did the world's feminists convene and finally settle once and for all the debate over whether "a sexual thing that you're doing on stage" is feminist and forget to alert me? Nope, just checked, and the jury is still out on that one. In fact, the jury's been having a complicated and, at the best of times, nuanced debate on the subject for decades now.

There is an important conversation to be had about female sexuality as it is portrayed in pop culture, as well as about the effect it has on young people. No disagreement there -- I could talk about that particular topic all day. But defining twerking as categorically unfeminist is silly and sensationalist. Look, twerking can be empowering! It can also be exploitative. While I'm making definitive statements about a complex topic, here's another one for you: Reducing Beyoncé's feminism to twerking is far more disempowering than her gluteal displays. Are we sure that Lennox even knows what twerking is? Because Beyoncé is hardly its most obvious spokesperson.

Lennox isn't the first to criticize a pop star for shaking her ass -- it's practically as much of a trend as twerking itself. Lily Allen got into it with her song "Hard Out Here," which boasts, in what has largely been interpreted as a dig at Miley Cyrus, "Don't need to shake my ass for you 'cause I've got a brain" (apparently not enough of a brain to foresee the problem with surrounding her fully clothed self with bikinied, butt-bouncing women of color in the song's music video). Last year, there was Sinead O'Connor's multi-part rant against Cyrus acting like a "prostitute." The thing is, all of these women are right on some level -- or they are at least getting at something that is right. The music industry is a patriarchal, capitalistic enterprise. The world is a patriarchal, capitalistic enterprise.

It's within that fucked-up framework that young women have to find power and explore their sexuality. It is a messy, messy thing. There are pitfalls everywhere: Beauty and sex appeal can get you attention and power. They can also be profoundly limiting and disempowering. Women are rewarded for their bodies and sexualities, and they are punished for them too, in equal measure. It's is the most impossible balancing act, one that pits the "virgins" against the "whores," the "virtuous" against the "vile." This is how women end up policing each other's behavior, it's the way we are turned against each other. Which brings me to this headline about this latest news item: "CATFIGHT: Annie Lennox Bashes Beyoncé.'"

At a time when Roxane Gay's "Bad Feminist" has made the New York Times best-seller list, I would hope we could all agree that not everything a feminist does is, or has to be, explicitly a feminist act. As Traister put it, we are all "flawed messengers"; that's because we're human, and because we're products of a flawed world -- the same flawed world that necessitates feminism in the first place.