The famously racist Willie Horton is no ancient relic. In fact, not only are they not sorry -- they're at it again 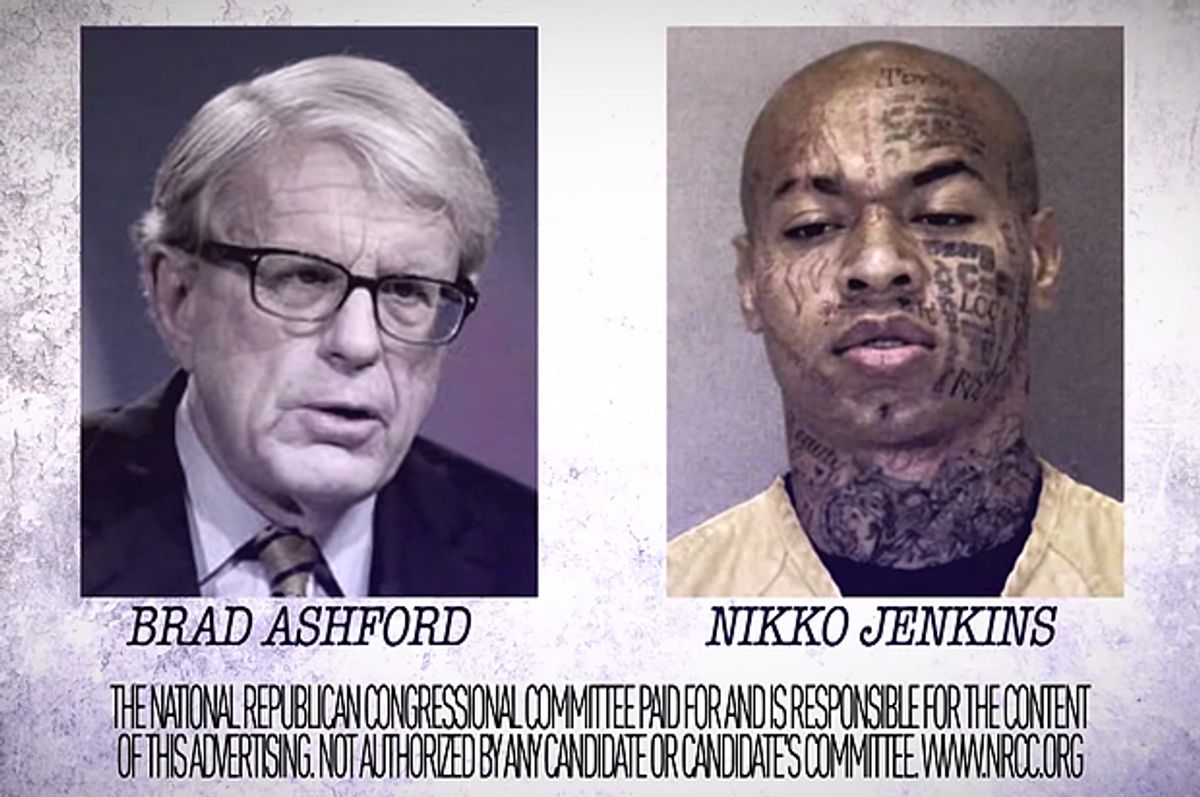 Every election season brings at least a few think pieces about the notorious Willie Horton ad and what it meant to American politics. This is a good thing to the extent that it reminds people of just how racist the whole "law and order" campaign that animated U.S. politics from the time of the civil rights movement on really is. In fact, take a look at it again just to remind yourself of the bad old days:

Infamous GOP strategist Lee Atwater saw that ad and declared he was going to make Willie Horton Michael Dukakis' running mate. This was a perfect example of his contention that Republicans would need to make their pitch a lot more abstract than just running around screaming the N-word. The law and order campaigns did that by pointing at the "killer, killer, killer" -- with a black face.

There were other racist ads over the years, of course, some more overt than others. As one might expect, George Wallace offered up some memorable ones. Here's an example:

That one added school busing into the mix, which, along with integrated housing and "urban violence," formed the basis of the white backlash of the late '60s that ushered in the Republicans' patented law and order strategy, which they've employed to great effect ever since.

This famous ad from well-known racist Sen. Jesse Helms was actually quite artistically hateful and went for a more gentle racist appeal:

One would think that such an ad would be seen as an embarrassment among Republicans in this day and age. But the man who made that ad, Alex Castellanos, is still working as a strategist and appears regularly on CNN as a commentator on election night. Here's what he said about that ad:

CASTELLANOS: Well that spot sure did cause a lot of trouble, didn't it. I'm very proud of it. I believe every bit of it. You know, my name is Castellanos. My son is named Castellanos. It may be, you know, one day he could get a job or he could get some deal because he is of some ethnic minority and all of that. I hope he never does. I think that lessens you when you do that.

The message in that spot's very clear and that is nobody should get a job, or be denied a job because of the color of their skin. The vast majority of Americans believe that. And if it's wrong for us to discriminate that way it's wrong for our government to discriminate that way. Again, it's freedom. Now it wasn't very politically correct to say at the time but there's this, you know, you always get the assault logged against you that there's something, you know, when a conservative Republican says the same words that Martin Luther King says, somehow he's racist. And I just don't buy that. I think you're proscribed from talking about quotas and things like that because you're a, you're a white guy.

They've always got a rationale for why it's OK. It usually has something to do with being a brave white guy rejecting political correctness and being unfairly victimized by people who see through their "abstraction." But he's not sorry.  You'll never hear him say that.

Neither is Sen. Ted Cruz who said just a year ago, “I’ll tell you something … the very first political contribution I ever made in my life was to Jesse Helms. When I was a kid, I sent $10 to Jesse Helms, ‘cause they were beating up on him, they were coming after him hard and I thought it wasn’t right." He recounted a story about John Wayne calling Helms "the guy who's saying all those crazy things“ and telling him to keep up the good work. Cruz said, "The willingness to say all those crazy things is a rare, rare characteristic in this town, and you know what? It’s every bit as true now as it was then. We need a hundred more like Jesse Helms in the U.S. Senate.”

It's 2014. We have an African-American president. You'd think there would be at least some recognition of the implication of these ads and a reluctance among contemporary Republicans to associate themselves with them. Unfortunately, after having witnessed the reaction to the Ferguson protests this summer, and the words from people like Sen. Cruz, it's not hard to see that there is still a market for this kind of racist appeal. And you need look no further than the National Republican Congressional Committee for the latest iteration of that tried and true theme. It's actually rather shocking even by these standards:

Unfortunately, trying to explain why this ad is as misleading as the Willie Horton ad with regards to the details of the accusation against the candidate merely furthers the racist appeal of the message. (The claims around this one are particularly thin and you can read all about that in this Think Progress post on the subject.) But the point is clear: Black men are scary and Democrats are letting them out of jail so they can come and kill you in your beds. When they're not stealing your jobs. And taking welfare. And otherwise ruining your way of life.

One would think appeals like this would have more salience during times when crime rates are high or there is general civil unrest. But the Republicans know their base and it's entirely possible that an atmosphere of paranoia and irrational fear as we are experiencing right now (and the media is flogging mercilessly) pushes the racial panic button just as easily. Ebola, ISIS, an African-American murderer, it all tickles the racist lizard brain in the same place. And apparently, it gets them out to vote.

Just don't call it racist.  That would be very wrong.  In fact, it's racist to even suggest such a thing.