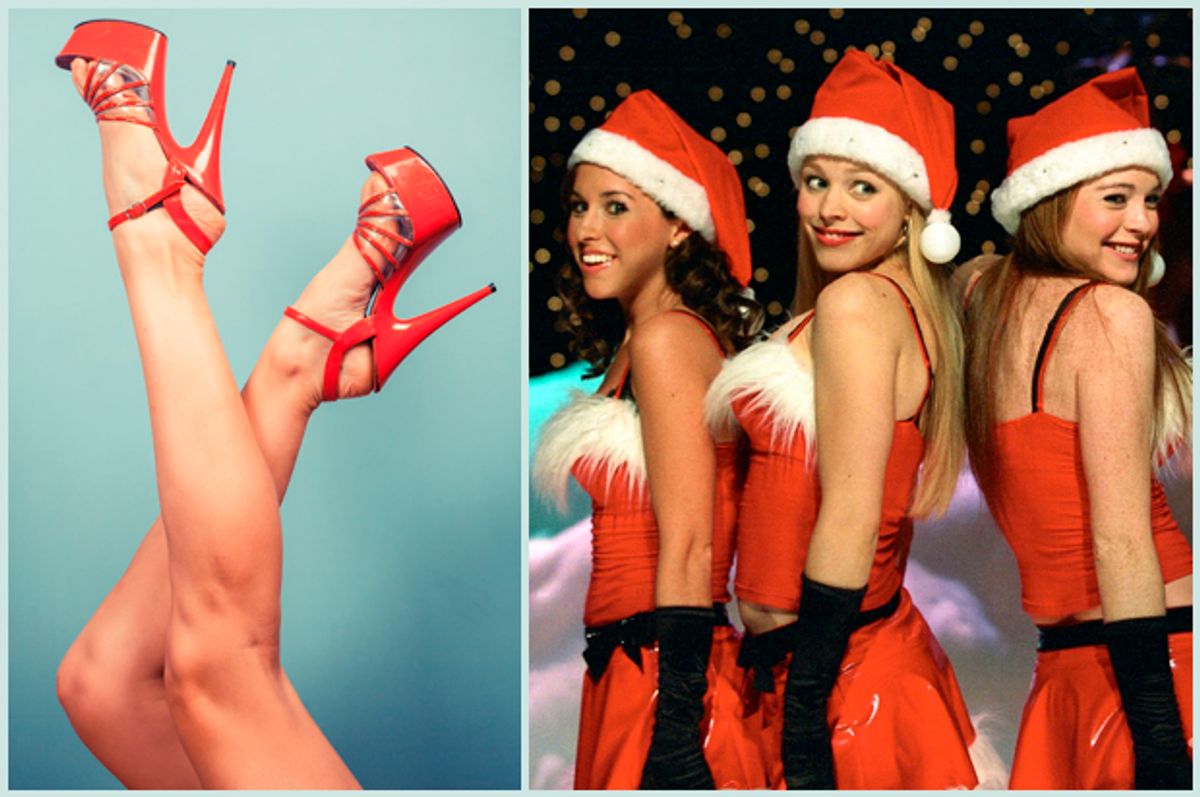 When I was 18, I began working at a local strip club that had four walls and a stage. It was not fancy, but there was no plywood exposed and the sound booth was top-notch. Part of the reason I am where I am today -- a porn star -- is I took too easily to that job back then. Or, rather, it took too easily to me. From the first night I was the top earner in that club. It wasn’t ridiculous money. This wasn’t Vegas or Miami or New York. It was Sacramento, California, in a warehouse district. My top earnings only netted me $500-$800 per shift. That’s $500-$800 per day for an 18-year-old, though. Previously, my take home was about $800 in a month, working full-time.

Strip clubs can be shark tanks. They are four tight walls teeming with girls who often had been the hottest in high school and the best at getting attention. Now those girls have grown up and the stakes are higher. There is a cash prize. It is the greatest popularity contest of their lives. Not all of the girls fit this mold, of course. Not even most. But enough do. Enough fit it that they will have their troops when it comes time to run out an enemy. Think “Mean Girls,” with teeth.

At first I was coddled by the other dancers and treated as the new girl. There were encouraging smiles and notes on where to shop, help with names. When the new-girl period expired, though, it became clear that I wasn’t just sailing on beginner’s luck. All too quickly I’d built up a roster of regulars, a game plan and a catchy hook. I knew when to ask for the money.

For the next six months I was bullied. My clothes were stolen, my drinks were spit in, my car was keyed. I was laughed at by a troop of fishnet-clad prom queens from the back of the room every time I stepped onstage. They made sure their comments were loud enough to hear across that distance and above the roar of the DJ. I made sure that they saw me counting the tallies on the dance sheet. I made sure they saw me smile when I was done. Their hate fueled me.

That was most nights. Other nights, I was scared of walking from my car to the entrance in the dark. I would enter the locker room once to drop my bag off and not again until closing time, eyes on the ground as I walked past a row of them perched on the locker bench, glaring and whispering and smacking their gum. All of the extra time on the floor only earned me more money. All of their time in their huddled in groups only earned them less. The cycle continued.

Sometimes I broke. Sometimes I left because I couldn’t take it and sometimes I crumbled to tears because I was more afraid of letting them see me leave than working through staying. Quitting and letting them win seemed to be out of the question. On the worst night, nearly every girl on the shift had agreed to bark when I walked by her. It’s stupid, of course — a grown woman barking as a power play. But I was 18 and it worked. I ran out the back door hysterically crying after four slow hours on a Tuesday night shift. A manager followed me out. He talked me down and talked me through it. He laid out the sort of things that one already knows, but it felt good to hear it out loud from a fellow human.

He said, “Laugh all the way to the bank.”

And then he fired them.

This story ran at a time when one of the questions America was beginning to reassess was whether growing student debt was worth its weight. Starbucks baristas were just beginning to tell their stories about having two master's degrees and no better job opportunities. The housing market had flattened and consumer spending along with it. I remember reading the article and cringing, then recollecting and laughing instead. Then I laughed harder when it occurred to me that I was quite literally at that time making my way to the bank.

Yet somewhere along the way, “Laughing all the way to the bank” stopped working for me. What began as a short-term job morphed into a career morphed into a life path I identify heavily with. I don’t regret my life. I don’t regret my decision to turn away from the degree I was after and choose this occupation instead. I don’t feel like it has made me something for the worse. Somehow, though, I am constantly finding myself reassuring strangers of this intensely personal feeling.

I have not been molested by an uncle. Not by a single one of them, if you can believe it. Yet strangers every day tag me with this scarlet letter because they can imagine no other circumstance under which I might choose the life I have chosen. Not only is this an insult to me, but it is an insult to all women who have made unconventional personal choices, because the go-to assumption is that a woman who doesn’t fit the mold has very likely been sexually damaged by a man. It is a comfortable way to explain away a disobedient woman. All jokes are fair game against a sex worker. The general attitude appears to be one of “Who do you think you are, porn star?”

There is the added factor of living among fellow porn stars, having working relationships and friendships and romantic relationships with them and now, yes, even families with them. We live on the edge of society, but we live in the center of our bubble. The noise is somewhere out there, where there represents a place hazy and distant — it is a line of picketers whose wall we only need to break through to ascend the stairs to the next convention, a self-appointed savior with her docu crew, a comedian shoving another tired cliché into his failing bit. We hear the things people say and they are often easy to laugh off because they are extreme and all we have to do is look at one another to see that it is not true.

I sometimes wonder how deeply the assumption that the adult performer is somehow a lesser person really runs. Will our aggressor be given a lighter sentence in the event of a murder trial? Will the case be taken less seriously in the event that one of us disappears? Are government employees instructed to give us less service? Are private employees? Does our ballot carry less weight? It is easy to dismiss it as a mindless din in the background, and then some days it becomes less so.

For me, it became less so last week, when I began a first-level comedy class. It almost immediately was clear that I had ventured too far outside of my bubble. I stepped back into that same sense of isolation I remember feeling during the bullying I endured at the strip club a decade ago. The man teaching the class opened with a story about a grocery store he hated. He said, “You know it’s bad, because you walk in and you just feel like it’s a bunch of ex-porn stars shopping there.” The next day he taught us techniques of status and leading with various parts of the body to convey who you are in the world. Finally, he cut the exercise off.

I spent that week trying to figure out why I was cringing so heavily at this teacher’s comments. They were nothing I hadn’t heard before. But I am scared of the potential moment one of the students in the class recognizes who I am, and all of the moments that follow as the teacher continues his monologues peppered with commentary that implies that being what I am is possibly the worst thing on earth.

What scares me is the shared embarrassment between that student and myself as the teacher drones on. The sideways glances to check my reaction every time the nerve is struck. The pitying conversation the student may have privately after class with the teacher, just to make him aware.

“You know, she really is that.”

Back then I felt I was dealing with an isolated foe, whose reaction to the threat I posed was to steal my clothes. (It is proving too difficult now not to point out how ineffective it actually is to steal a stripper’s clothes in a strip club.) This behavior was not a reaction that influenced other reactions and hatefully targeted an ever-broadening group of people in an open way. When I went home, it stopped. It was targeted bullying, plain and simple.

Accusing a woman of being molested by her uncle is considerably darker. It is this sort of violence of speech that leads to the depersonalization of persons. It is the sort of attitude that leads strangers online to make sexual comments about my infant daughter. Comments that sexualize my infant stem from the assumption that I am less of a human than the speaker is, and so therefore is my child. These are people who push me to the margins of society based on a characteristic they have decided places me beneath them. They have decided that characteristic is funny. It extends that the things that happen at the expense of the people who harbor that characteristic are OK. That these people’s sense of worth is expendable. And perhaps the more insidious thing is when the marginalized group begins to believe it themselves.

Weeks like this past one leave me wishing I were back in the shark tank with the mean girls: when I find myself not performing to the best of my ability because I’m afraid of being judged, when I read comments that dismiss my personhood, my fiancé's personhood, my mother’s right to be proud of my accomplishments, when others feel that my humanity has faded so much as to give them room to openly sexualize my infant — a shark tank is the first place I fantasize I can run to. A tank is a controlled environment. It is a place with a hierarchy topped by a person who holds the power to finally stand up and say, “OK, get out of here. That’s enough.”

And then when the fantasy is over, I am left with myself. I realize in that moment that the first person who will have to say it, in my case, is me.