The student I couldn't reach

Each day I taught, a knot of dread formed in my stomach. I never changed him, but by the end, I understood better 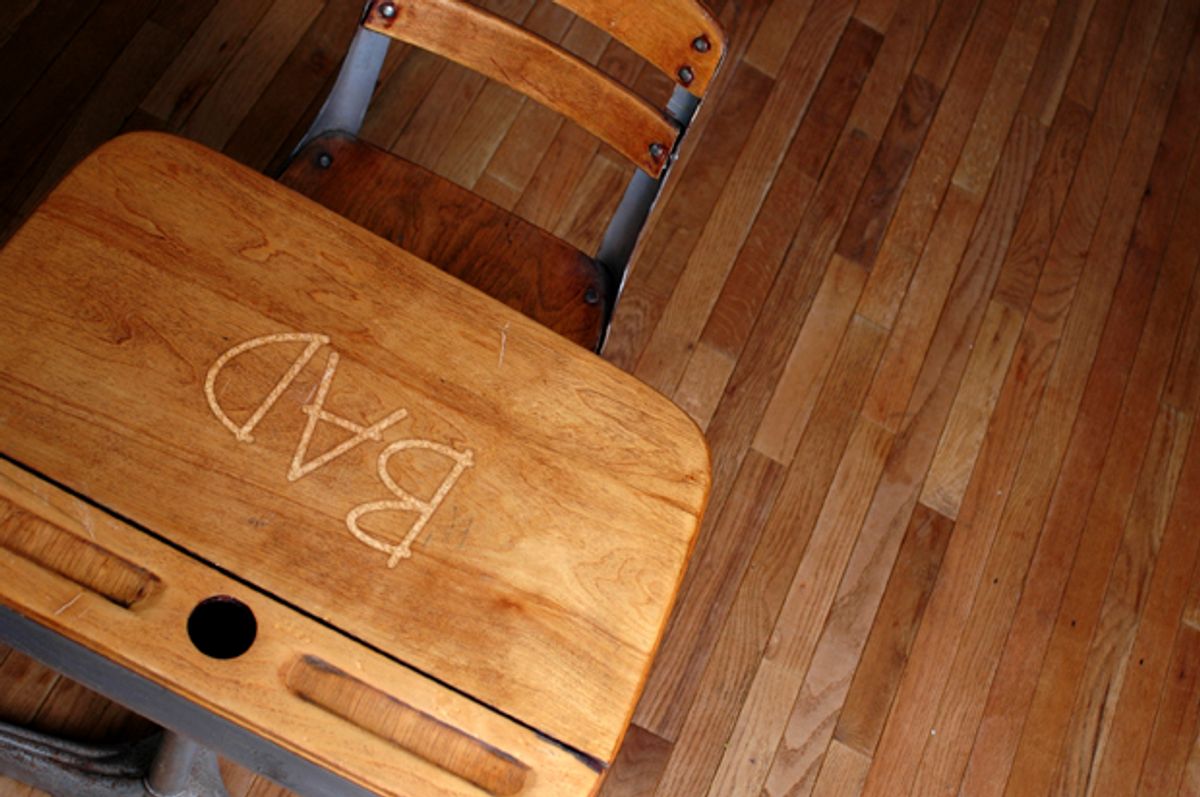 I began class with the syllabus, went through roll and made my usual joke about calling students by the names they wanted to go by: “If you say you want to go by G-Money, I will call you G-Money for the rest of the quarter!”

I went about the room of faces of every hue and color taking names, Thuc and Tarik and Donte, Roselily, Mercedes, Angelique who went by Angel, and Patric-ia who went by Trish. This writing class was perhaps my 50th teaching low-income, first-generation minority students at the university, and I proceeded with the assurance of experience.  I came to a tall, thin, dark-skinned young black man in baggy jeans and a backward basketball cap, who said nothing as it was his turn, just stared for a long and uncomfortable silence, grinned in a flash of startlingly white teeth, then said, “Bad.”

I glanced at my roll, at a name that was long and perhaps Muslim or African.  “You want to go by ‘Bad’?”

He glanced at his classmates, gave a sly nod my direction as if to make it clear that he and they were in on the shared assessment that this teacher was a ridiculous square, that his tyranny had to be fought with subversion. “I am Bad,” he said with a wink, and the class laughed nervously, and I moved on. Later, as I bantered with another girl in class, the young man said something that elicited a stir from the students near him, and when I glanced over he met my gaze and held it with an unsettling intensity.  I decided not to call him “Bad,” to call him by his listed name, Caron.  (For purposes of his privacy, his real name and identifying characteristics have been changed.) I made a mental note to try to connect with him, to demonstrate that I cared about where he came from and what he cared about — to show him I was on his side. My classes are geared toward supporting minority students, a job I secured on the basis of the perspective gained before graduate school, when I spent two years teaching fourth grade in the rural black public schools of the Mississippi Delta. Often, communicating to students that you’re invested in their success is essential to gaining their trust.

Over ensuing weeks, it became clear Caron had no intention of accepting my overtures or respecting my authority. He followed overt instructions begrudgingly, with an exaggerated slowness, moving to a group only after everyone else had already gone so as to make clear how burdensome the instructions were, opening his book only if asked a second time, crossing his arms and slouching down in his chair with hat brim tipped low if he was asked to discuss with others. Then, during group discussion, he began to assert himself covertly: Each time I spoke, asking a question or making a comment, he averted his face from view and began to speak in a low voice, mockingly lilting in imitation of my tone and cadence, eliciting a murmur of reaction from nearby students. I tried to ignore it, but soon all I could focus on was the voice and its indistinct, hostile invocations. I called him over one day after class. “I’d appreciate it if you’d stop speaking when I am.  It’s disrespectful.”

He raised his eyebrows, grinned with a flash of teeth. “I’m not speaking while you are.”

I stood, mute in the face of his blatant denial, finally walked away. Yet there was no walking away from the persistent distraction and the ways it derailed the progress of the class and poisoned its culture, how it silenced other students wary of contributing under conditions where everything offered was reflexively scorned. A single student, no matter how worthy or challenged, should not be allowed to harm others' educational experience. I called my favorite counselor from the office charged with supporting at-risk students, and spoke to a woman who often worked wonders with her students; she reported that he remained closed to her, that he wouldn’t say anything, just sat with arms crossed watching her with what she called the “stink-eye.” All she could tell me was that he was a first-generation African immigrant from a poor neighborhood and rough high school, and that he was doing poorly in all his classes so far.  She promised to talk to him, but nothing changed.

Each day I had to teach, a knot in my stomach began to form hours before class began, a queasy, sinking dread I knew too well from years teaching in the Delta.  Mississippi had taught me that there was no reprieve in the refrain “What’s the worst thing that could happen?” as the answers could include fistfights, assaults, incidents with box cutters and brass knuckles; in my experience, the consequence of defiance like Caron’s was chaos, trauma and failure.  Those years in the Delta were the end of my idealism and my innocence, but I’d thought that this job, teaching these deserving, unprivileged students, was atonement and redemption — that I’d become a better teacher and a better man.  Now doubt came flooding back.

I tried to understand, spoke to Caron after class and in meetings in my office during which he crossed his arms and smiled at me with what seemed to me to be a leer, sneering and implacable, as he said again and again he would stop doing “whatever I claimed he was.” His denial was as infuriating as my efforts were ineffectual; I was far past the point where the problem was with my effort or innovation or compassion. Not all students can be reached, whatever platitudes about educational justice and good teaching I preferred to declare; to let Caron derail the class further was to betray the rest of the students.

I went to the director of composition, explained to her the extraordinary circumstances, and begged her for an extraordinary accommodation for the remaining weeks of the quarter, during which the class was writing an essay about their personal identity: I’d work with Caron one on one by email, and accept his work and grade it, but he would no longer attend class and so disrupt it.

I could easily have failed him, though his work itself was competent; I could have had a case with student conduct that well might have ended his undergraduate career or at least have marred his transcript, and surely he didn’t deserve my generosity. But in a half-decade of teaching children raised from poverty, I had learned: There are reasons people act as they do.  Back in the Delta, I didn’t understand why one girl was prone to silences and rages when children teased her about her worn clothes and how she smelled until I took her home to a house where the windows were boarded, the water turned off so that there was no shower, and the trash was piled head-high in the yard, where a cloud of flies was thick as smoke.  I didn’t understand either why one boy mocked me and cursed the male vice principal, spit in my face and laughed during corporal punishment because he’d worn three pairs of pants to defeat the paddle -- until I understood that he had been raised without a name or birthday on the streets of Midnight, Mississippi, and at age 9 had found his mother in a bathtub with her throat slit by her boyfriend, who had abused him for years.

I knew I was missing something, but it was sweet relief to walk into that composition class without Caron there and feel that knot of dread unwind; the sound of those student’s voices without the undercurrent of threat was a beautiful clamor of eager engagement.  All was not lost -- a kid from that class whom I paid far less attention to than I would have liked, a Persian-American kid named Harpo, who hailed from inner-city Oakland, California, and wore a flat-brimmed Raiders cap at a 45 degree angle, became so animated in trying to describe to clueless me what Hyphy music was as a lifestyle and identity that he stood in the middle of class to demonstrate what it meant to "Go dumb.”  I can tell you that Harpo told me last year, at a graduation ceremony for scholars of diverse background, that what carried him through rough patches of his undergraduate career was what I said the first day of class before Caron asserted himself as being "Bad": "This class is challenging and demanding, but you all belong here at the university, and deserve your place in this class.  Work hard, and I promise you will succeed."

And here is what little I can tell you about why Caron felt he had to be “Bad”: First, that he himself didn’t know.  He wrote in his identity essay that he was lost being at the university, was insecure with his intellectual ability and capacity, and terrified of failing his family and their hopes and dreams, and that acting out against authority was the way he’d gotten through high school, where he never felt he belonged as an African immigrant in a historically black and poor area.  That he had tried and tried to stop, but found his mouth opening each time I spoke as if by its own accord; that he hadn’t been offering satire or commentary, but simply repeating my words verbatim, which the students around him had not been delighted with, but had resented and thought idiotic, so that the sounds I’d heard were often them begging him to be quiet.  That he was ashamed.  That he’d been ashamed his entire life, of being himself, of being exposed, and of who he’d been — that he’d felt that way since he was a child back in Africa, and militia soldiers had come looking for his brother and father, and had dragged him out from the table where he’d been hiding, and placed the rifle barrel to his temple and made him tell them where his mother was hiding, where his father and brother might be, that in his fear he would have betrayed everything he loved and so he trusted himself least of all.  That he was sorry, and thankful for the second chance, and that though I shouldn’t forgive him for how he’d been, he’d make no excuses from here on out.

I saw Caron across the room at the same graduation ceremony where I spoke to Harpo. Perhaps I was staring, and Caron felt my gaze; he turned in his seat, and our eyes met and recognition flashed across his face. He didn’t smile, but he didn’t look away, just met my gaze and then nodded once, slowly, as if to affirm that he’d kept his word, and there was nothing else now between us.

Michael Copperman's work has appeared in The Sun, The Oxford-American, Guernica, Creative Nonfiction, and Triquarterly Online, and garnered fellowships and awards from the Munster Literature Center, the Oregon Arts Commission, Literary Arts, and Bread loaf Writer's Conference.  His memoir about teaching is represented by LMQ.