"Who do you report to when your rapist is the police?"

This cop is charged with raping eight black women. And while it's chronically underreported, he's not the only one 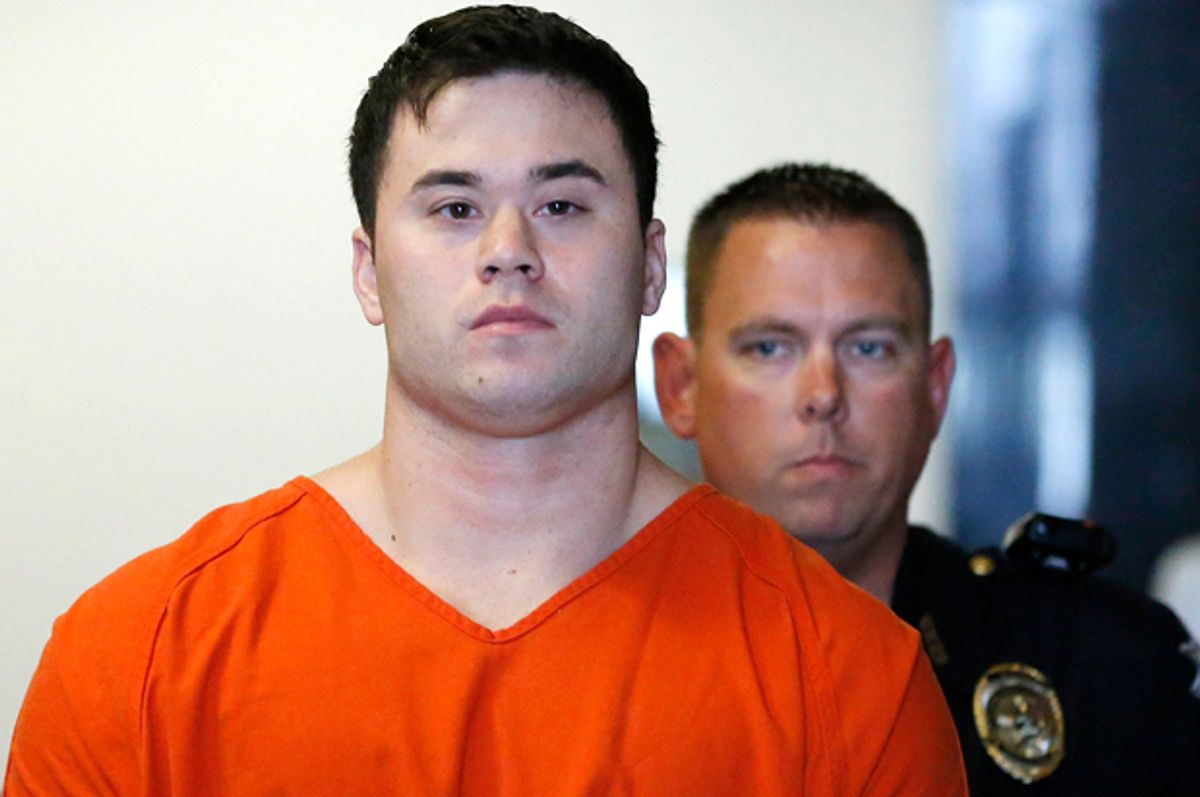 In 1974, while imprisoned in Beaufort County Jail in Washington North Carolina, Joan Little defended herself against sexual violence by a white guard by stabbing him with an icepick. She was charged with first-degree murder by an all-white jury, and faced the death penalty. In 1975, she was acquitted, the first time a woman had been acquitted of murder on the grounds of self-defense against sexual assault.

In a different case, police were called to Tiawanda Moore's home because of a domestic dispute, and a police officer sexually assaulted her. When Moore tried to report the assault to police internal affairs, she was discouraged from doing so, so she started recording the conversation on her cellphone. When caught recording, Moore was arrested and charged with two counts of eavesdropping, and faced up to 15 years in prison.

Then there's Daniel Holtzclaw, an Oklahoma cop, who allegedly raped and sexually assaulted eight black women between the ages of 34 and 58, threatening to arrest them if they did not perform sexual acts. He has been charged with 16 counts, including first-degree rape and sexual battery. There may be more victims. He is said to have specifically targeted black women with criminal histories, who used drugs and engaged in sex work.

These are hundreds if not thousands of cases of police sexual violence against black women. In the last few years, because of the high-profile murders of Oscar Grant, Sean Bell, Trayvon Martin, Eric Garner, Michael Brown, Jonathon Crawford and too many more, police racial profiling and brutality has gotten renewed attention by mainstream media.

Obviously the murders of black men by the state are horrendous and unacceptable, but we cannot also forget that black women, including trans women, are victims of police violence, including sexual violence. Zoe Carpenter, writing for the Nation, explains that according to the Cato Institute, nine percent of reports of police misconduct in 2010 involved sexual abuse, making it the second-most reported form of misconduct, after the use of excessive force. In addition, according to a 2007 report prepared for the United Nations Committee on the Elimination of Racial Discrimination, she explains, “rape and sexual abuse by police in the United States are primarily reported by women of color.”

At the Color of Violence conference in 2000, Angela Davis gave a keynote address, where she shared a story of how, many years earlier in San Diego, she and a friend came upon a black woman on the side of the road. She related her story of being raped, then waving down a police officer for help, who instead of helping her, also raped her. Angela Davis shared this story as an example of how law enforcement is a main perpetuator of violence against women, and that an anti-violence against women movement that relies on law enforcement response to violence against women is problematic and dangerous for women, especially those of color and poor women and their communities.

The most marginalized women in our society -- black women, trans women, sex workers, women experiencing homelessness -- are too often targeted by law enforcement. The police officers who victimize these women know that they are the most undervalued members of society, whose race, gender identity and class horrifically marks them as non-credible, inherently hypersexualized and worthless. YWEP, a grass-roots organization by and for girls and trans girls of color in the sex trade and informal street economies, conducted research on the violence street-based youth experienced by state institutions, including law enforcement, nonprofits, schools and hospitals. They released three reports, called Bad Encounter Lines, that shared the stories of violence experienced by the youth surveyed. Police violence represented 30 percent of reports of institutional violence.

We must situate police sexual violence against women of color within a historical context of the continuation of control of black women’s bodies, originating in slavery, and within the larger contexts of increased police surveillance of poor black communities, racial profiling, mass incarceration and the prison industrial complex.

There is too often silence by women’s rights groups on police sexual violence against women of color. Sikivu Hutchinson writes that “because white women of all classes enjoy the privilege of protection from criminalization and systemic brutality by law enforcement, state-sanctioned violence doesn’t register as a 'feminist' priority.” Many anti-violence and anti-rape organizations also have partnerships with local law enforcement. RAINN, one of the most well-known organizations advocating against rape and sexual assault, earlier this year attacked the notion of rape culture in a press release announcing its recommendations to the White House task force created to combat rape on college campuses.

On its website, it states: “Reporting to the police is the key to preventing sexual assault. It’s the most effective tool that exists to prevent future rapes.” Whom do you report to when your rapist is the police?