“This is an issue that will cost him votes”: Will Scott Walker’s minimum wage flubs do him in?

As Democrats hammer away at Wisconsin's governor on the issue, he continues to struggle in the polls 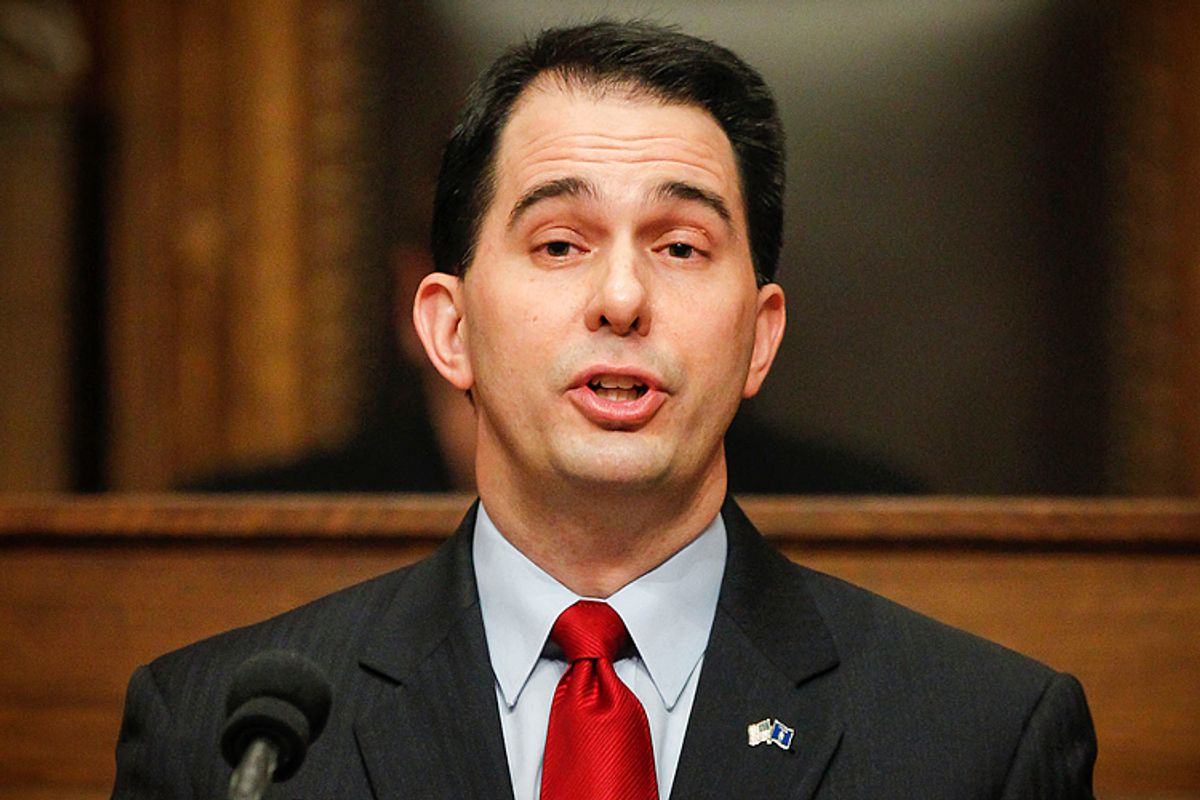 With 12 days to go before an election that’s do-or-die for Wisconsin Gov. Scott Walker’s national ambitions, the Republican finds himself locked in a dead heat with Democratic challenger Mary Burke, as Burke capitalizes on Walker’s ethics woes, his opposition to raising the minimum wage, and his statement that the minimum wage “doesn’t serve a purpose.”

After Walker signed into law legislation that ended the collective bargaining rights of public employees and required state workers to make higher benefit contributions, he became a top target for labor and progressive activists. A 2012 recall effort faltered, earning Walker the rare distinction of a governor who had been elected to his job twice in the span of less than two years. But an investigation into his recall campaign’s possible coordination with outside conservative groups and Walker’s stubborn opposition to a popular minimum wage increase have Democrats confident that this could be the year they depose him.

Asked on MSNBC Tuesday whether he thinks Burke will pull off a victory, AFL-CIO President Richard Trumka responded affirmatively.

“I do,” Trumka said. “It’s not been tough for us to get volunteers in Wisconsin, because this guy is known as just an anti-worker governor in Wisconsin. He’s sort of like the poster child for that across the country.”

The polls give Trumka and his allies in the state reason for optimism. The past four surveys in the race have shown a statistical tie, and RealClearPolitics’ polling average bears out just how close the contest is, giving Burke a 0.3 point edge over Walker.

The disappearance of Walker’s lead comes as Democrats have pounced on the Walker administration’s recent assertion that $7.25 an hour, the state’s current minimum wage, is a “living wage.” (A recent survey finds that 74 percent of Wisconsinites disagree.) They’ve also seized on Walker’s statement to the Milwaukee Journal-Sentinel’s editorial board that the minimum wage “doesn’t serve a purpose.” Walker explained that he wanted workers instead to find better-paying jobs, but the University of Wisconsin’s Center on Wisconsin Strategy calculates that raising the state’s minimum wage to $10.10 an hour, which Burke supports, would lead to pay increases for half a million Wisconsinites.

Burke has been vocal in her support for wage increase. "I approach it as what I just think is the right thing to do in terms of growing our economy, in terms of fiscal responsibility, and in terms of helping people's lives. Increasing the minimum wage does all three," Burke told the Associated Press last week.

A wage increase is also politically popular. The University of Wisconsin-Milwaukee released a poll in June showing that by a margin of 76 to 23 percent, Wisconsinites support raising the minimum wage. Last week, Public Policy Polling found that 44 percent of likely voters in the state were more likely to support a candidate who favors raising the minimum wage to $10.10 an hour. Only 25 percent were more likely to vote for a candidate who opposed such an increase. In a race as close as this one, then, the minimum wage could make a huge difference. That’s why progressives will keep hammering away on the issue.

"Scott Walker is wishing the question of the minimum wage would just go away,” Joe Dinkin, national communicators director for Working Families, told Salon. “But as long as he puts the demands of powerful corporations over the needs of low-wage working families, this is an issue that will cost him votes."