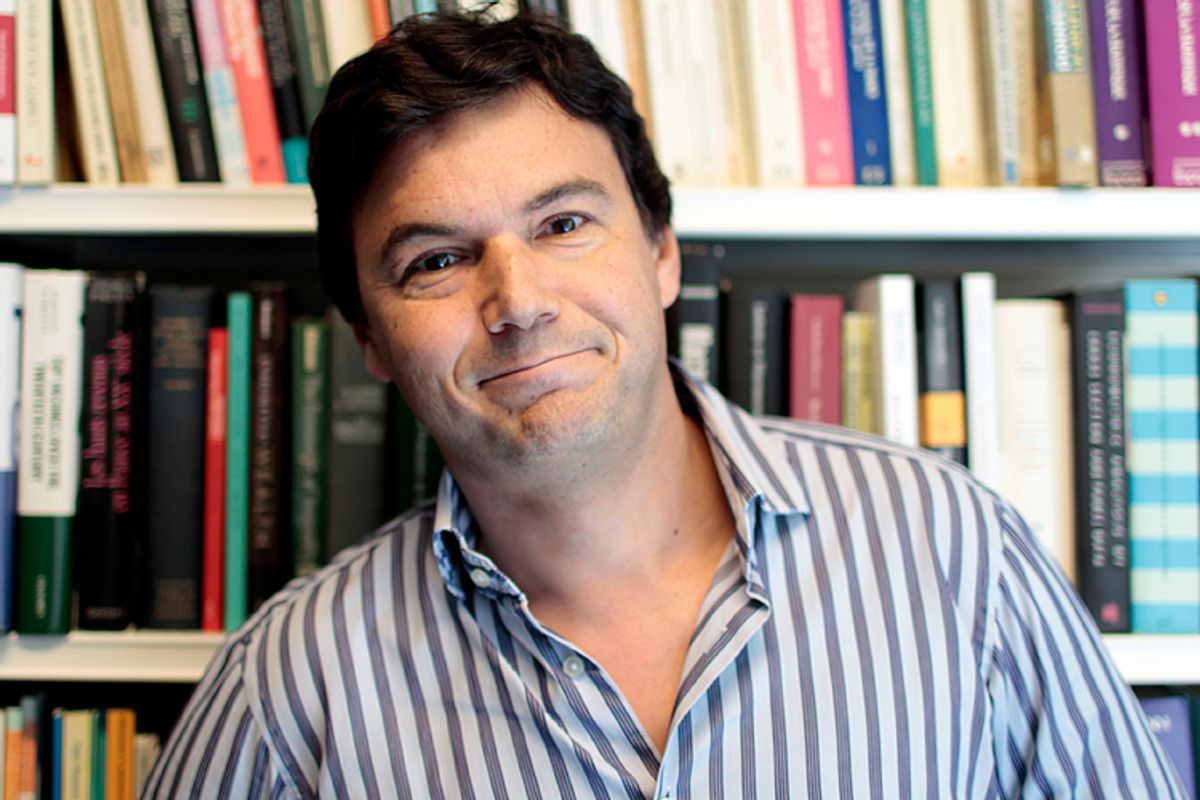 According to a new report, the richest one percent have got their mitts on almost half the world's assets. Think that’s the end of the story? Think again. This is only the beginning.

The “Global Annual Wealth Report,” freshly released by investment giant Credit Suisse, analyzes the shocking trend of growing wealth inequality around the world. What the researchers find is that global wealth has increased every year since 2008, and that personal wealth seems to be rising at the fastest rate ever recorded, much of it driven by strong equity markets. But the benefits of this growth have largely been channeled to those who are already affluent. While the restaurant workers in America struggled to achieve wages of $10 an hour for their labor, those invested in equities saw their wealth soar without lifting a finger. So it goes around the world.

The bottom half of the world’s people now own less than 1 percent of total wealth, and they’re struggling to hold onto even that minuscule portion. On the other hand, the wealthiest 10 percent have accumulated a staggering 87 percent of global assets. The top percentile has 48.2 percent of the world wealth. For now.

One of the scary things about the wealth of the supperich is what French economist Thomas Piketty pointed out in his best-selling book, Capital in the 21st Century. Once they’ve got a big chunk of wealth, their share will get bigger even if they sit by and do absolutely nothing. Piketty sums up this economic reality in a simple and horrifying formula: r > g.

Basically, this means that when rate of return on wealth is greater than the overall rate of growth of the economy, as it has nearly always been throughout history, the rich will grow inevitably richer and the poor poorer unless there is some kind of intervention, like higher taxes on wealth, for example. If r is less than g, the assets of the super-wealthy will erode, but if r is greater than g, you eventually get the explosion of gigantic inherited fortunes and dynasties.

This is happening now: If you look at the Forbes 400 list of the wealthiest people in America, you see a lot more inherited fortunes in the upper ranks than you did a couple of decades ago, when the policies that held inequality at bay began to get dismantled. In today’s top 10, there are more scions of the Walton family than entrepreneurs like Bill Gates or Mark Zuckerberg. These people have essentially done nothing of value for society, and yet their undue influence shapes our political landscape with the wave of a wad of cash.

There have been moments in history when things were not so lopsided. During the post-war period, inequality was contained because governments made sure their rich didn’t accumulate at such alarming rates by doing things like taxing their estates at a high rate. At the same time, they created policies to lift the incomes of the less well-off and allow them to have some basic security. But that’s an exception in history. Most of the time, this kind of intervention did not happen, and so the rich kept gobbling more and accumulating more power to keep it that way until one of two things happened — a revolution or some kind of catastrophe or disruptive event, like a war, shook things up.

As the Credit Suisse report states:

“[Wealth inequality] has been the case throughout most of human history, with wealth ownership often equating with land holdings, and wealth more often acquired via inheritance or conquest rather than talent or hard work. However, a combination of factors caused wealth inequality to trend downwards in high income countries during much of the 20th century, suggesting that a new era had emerged. That downward trend now appears to have stalled, and possibly gone into reverse.”

That’s right. We’re on a turbo-charged ride back to the days of Downton Abbey. Piketty warns that we’re in the early stages of reverting right back to periods of massive inequality, like 19th-century Britain or 18th-century France, where great dynastic fortunes ruled and everybody else fought for scraps.

What the statistics and formulas don’t show is the kind of human suffering that results from this kind of extreme inequality. While the global elite zip around the world in private jets and watch their stock portfolios expand on computer screens from within their gated mansions, the bottom half stays awake at night trying to think of how to pay for medicine for a sick child. The things that give life dignity and meaning, like a quality education, a decent job, and the security of knowing you have a roof over your head and a doctor to care for you when you are ill grow further and further out of reach. Anxiety never leaves because one unforeseen mishap can push you down into poverty, and if you’re already there, you spend much of your time searching, often fruitlessly, for a way out.

But there’s a little bit of anxiety percolating at the top, too. On the June cover of the conservative magazine American Spectator, a cartoon shows an incensed mob looking on as a monocled fatcat is led to a bloody guillotine — a scene evoking the Reign of Terror during the French Revolution. The caption reads, “The New Class Warfare: Thomas Piketty’s intellectual cover for confiscation.” In the story that accompanies the image, James Pierson warns of revolution and a growing class of suffering people who want to punish the rich and take away their toys.

That would be one way to address things. Another would be the recognition that inequality is extremely destabilizing and dangerous, and that non-violent interventions are possible, as we saw in America with the New Deal. Things like robust tax reform, unions, regulation, changes in corporate governance and CEO pay, affordable education, jobs programs, expansion of Social Security and universal healthcare.

Or we could just do things the old-fashioned way and wait for a disaster even bigger than the meltdown of 2007-'08. In that case, fasten your seatbelts. This ride could get very rough.