Rove's shady ACA ploy: Constructing an anti-Obamacare "mandate" out of nothing

With less than two weeks to go, Karl Rove argues the election is all about Obamacare again. Here's what's behind it 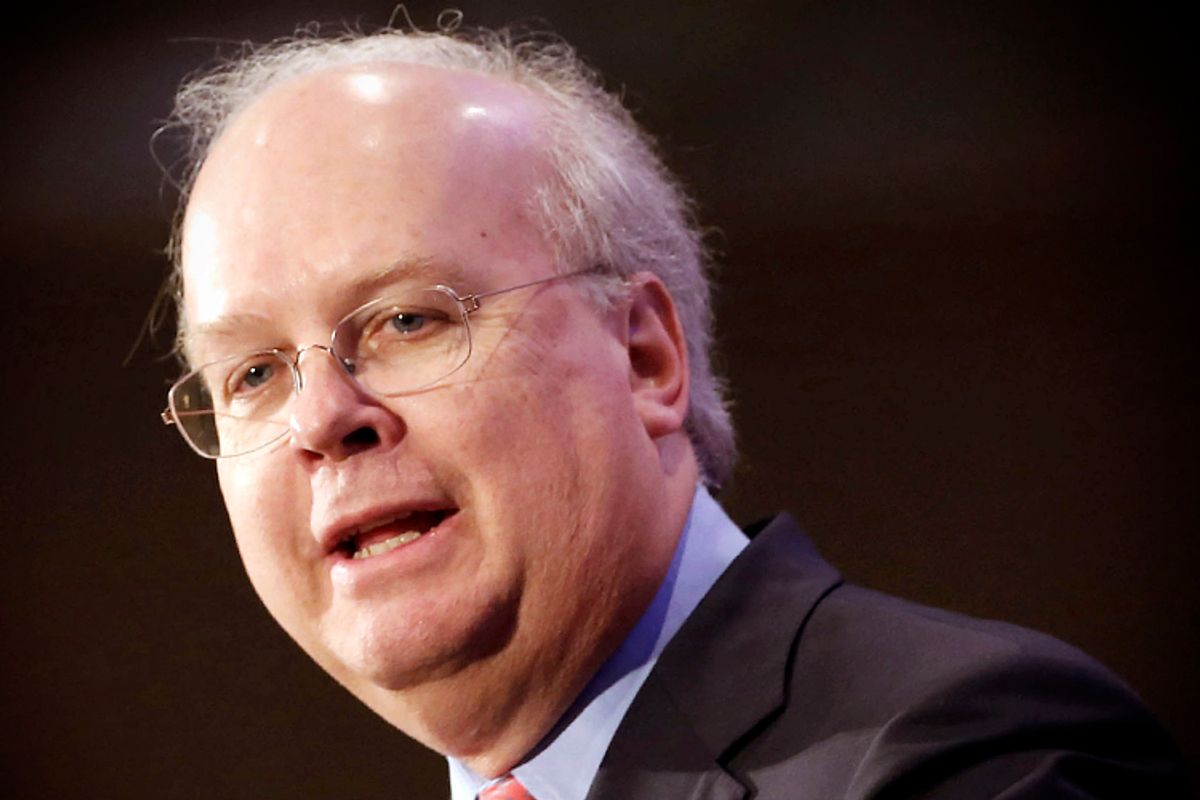 One of the biggest themes of the 2014 election cycle has been the slow, steady disappearance of the Affordable Care Act as its central issue. In late 2013 and early 2014, Republicans were positively ebullient about the coming GOP electoral tsunami, powered entirely by voter anger with Obamacare. The website didn’t work, plans were being canceled, people weren’t signing up – Republicans couldn’t have been happier. “In the Senate, a lot of things are going for us,” Reince Priebus said in March. “Obamacare is in the tank and is total poison across the country. It is an issue they can’t get away from.”

Then things changed. The website was fixed, people signed up for coverage, uninsurance rates began falling, predictions of “skyrocketing” rate increases didn’t materialize, and Republicans began backing off the Affordable Care Act. Spending on anti-ACA ads plummeted over the summer as Republicans realized that they couldn’t just ride Obamacare to victory in November. GOP governors began embracing the Affordable Care Act’s Medicaid expansion, complicating the arguments of pro-repeal candidates who started feeling pressure to reconcile their stance with the reality that Obamacare was actually working. GOP Senate candidates like Mitch McConnell, Scott Brown and Thom Tillis have all twisted themselves into knots trying to explain how they’d get rid of Obamacare but also retain the most popular and effective parts of the law.

As this slow, steady retreat was happening, there was a general assumption that Republicans would make a superficial late-game push to resurrect the ACA as the defining issue of the midterms so that whatever gains they claim on Election Day could be dressed up as an anti-Obamacare “mandate.” Well, here we are, less than two weeks from the election, and Karl Rove has a Wall Street Journal column arguing that “ObamaCare Returns as an Election Albatross.”

“As the election nears, ObamaCare is re-emerging as a major liability for the Democratic Senate that passed it,” Rove writes, citing polls showing general dissatisfaction with the law. The Affordable Care Act has never polled particularly well, so it’s not clear why a new round of less-than-spectacular polling for the ACA would indicate that it’s “re-emerging” as an issue.

Rove wrote a column in July making very much the same arguments against the health law – It’s unpopular! Plans are being canceled! Premiums are rising! – with the caveat that “GOP candidates can't simply rely on attacking Democrats for having voted for ObamaCare or, in the case of nonincumbents, supporting it” and will have to “spell out what they would do instead of ObamaCare.” The GOP, of course, never did that. And instead of grappling with that reality, Rove is back to arguing that Republicans can once again just bank on the ACA’s bad poll numbers. “Democrats created ObamaCare, passed it, own it, and will suffer because of it,” Rove writes today. “The holy grail of liberalism for decades, the president’s health law may end up as a decisive cause of two epic midterm defeats for the Democratic Party.”

But, again, there’s really no reason to think that the Affordable Care Act is any more of a problem for Democrats now than it was three months ago. Indeed, in that time it’s been the Republicans who’ve been tripped up by the law and generally incoherent on where they stand. Rove is just trying to seed the ground for the post-election environment in which Republicans will try to argue that America threw the Democrats out of power because of the Affordable Care Act.