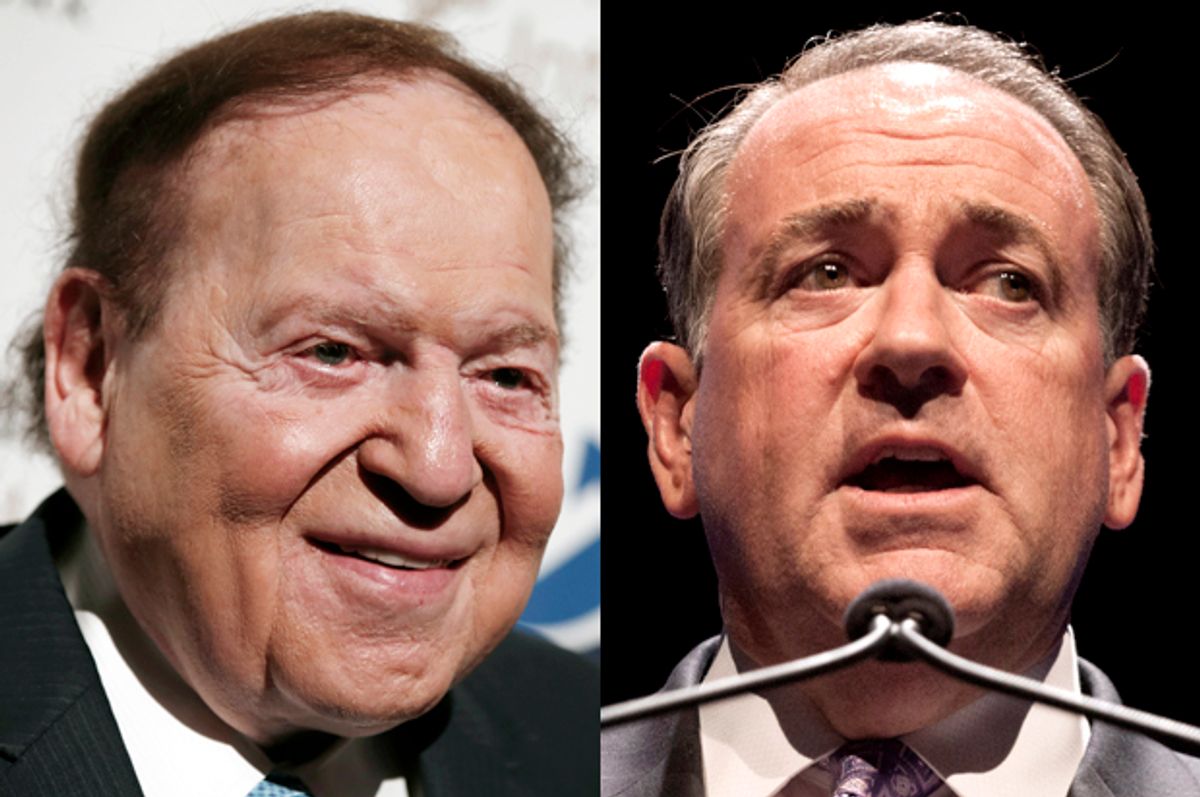 Billionaire casino magnate Sheldon Adelson and his wife Miriam spent an astonishing $98 million trying to elect conservative candidates during the 2012 election cycle. The Adelsons threw more than a fifth of that total at Winning our Future, a super PAC supporting GOP presidential hopeful Newt Gingrich. We all know how Gingrich's primary campaign against Mitt Romney turned out, but the Adelsons' contributions kept Gingrich's campaign afloat far longer than the former House Speaker would otherwise have survived. With potential candidates already gearing up for the 2016 contest, they're assiduously courting Adelson's support. According to a new report, a surprising contender has emerged for Adelson's backing -- former Arkansas Gov. Mike Huckabee.

RealClearPolitics' Sean Conroy reports that Huckabee -- who just weeks ago was threatening to leave the GOP for its sin of not hating gays hard enough -- is "making moves" consistent with a repeat bid for the Republican presidential nomination, hoping that he can accomplish in 2016 what he failed to in 2008. Riding a wave of social conservative support, the Southern Baptist preacher won the Iowa caucuses that year, but short on cash and boasting only limited appeal, his campaign quickly flamed out. Since then, Huckabee has hosted an eponymous show on Fox News, while continuing to stump for GOP candidates and maintain ties to key members of his social conservative base. Huckabee contemplated a White House run in 2012, but opted to stick with his more lucrative career as a conservative media celebrity.

This time may be different. Huckabee realizes that 2016 is probably his last chance to make a serious run for the presidency, and Conroy's sources tell him based on their conversations with the former governor that they're confident he's in this time. And if Huckabee takes the plunge, he wants to make sure he has money for the long haul.

That's where Adelson comes in. "[T]here is reason to believe," Conroy contends, that Huckabee could be Adelson's candidate of choice in 2016. Conroy reports that the two "speak occasionally by phone," and points to Huckabee's Adelson Defender of Israel award, which the governor received in New York last year.

Asked whether Adelson could back a Huckabee 2016 campaign, Huckabee told Conroy, “Gee, I would hope so. I wouldn’t presume on anyone or anything, but if I did do this, would I love to have his support? Yeah. I don’t want to be subtle.”

While Huckabee currently ranks among the top 2016 contenders in the polls, it seems more likely than not that if he won Adelson's support, he, like Gingrich, would merely live to fight a bit longer, but still lose at the end of the day. Although Huckabee emerged as the field's leading social conservative in 2008, the 2016 contest will feature a larger number of candidates running against reproductive rights, LGBT equality, and secularism. Rick Santorum is reportedly ready to give it another go, and the fresher, angrier face of Ted Cruz has already ignited the social conservative crowd. So Huckabee 2016 probably won't work out, but we'll at least be treated to a long campaign devoted to his thoughts on Uncle Sugar, women's libidos, and the tyranny of homosexuality.