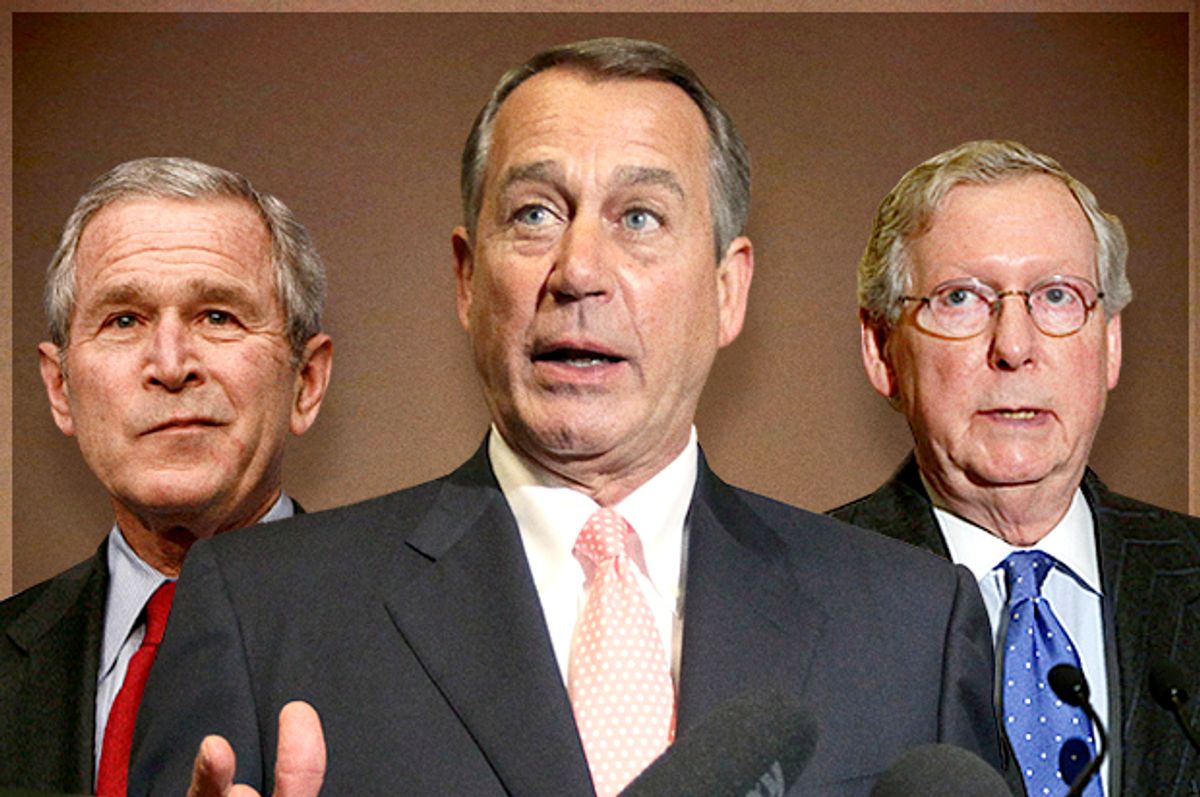 When I first heard President Obama’s remarks on the 2014 midterms to Rev. Al Sharpton on Politics Nation Monday -- insisting he's fine with the red state Democrats who are distancing themselves from him because they “are all folks who vote with me” -- I had two contradictory thoughts. Either Obama was being awfully gracious, or else he was mad as hell, and happy to bear-hug cowardly red state Democrats so hard it might hurt them.

But the reaction to Obama’s remarks, as well as to his earlier comment that “my policies are on the ballot” in November, underscored the extent to which we now have two electorates, separate and very unequal. The Republican Party is relying on Obama-hate to turn out its 96-percent-white, middle-class-to-wealthy base, while the Democrats, still trying to be a multi-racial party in a multi-racial country, are trying to court voters of every race and class. It can be a tough sell.

It’s amazing the extent to which the mainstream media accepts that the GOP’s personalized, deeply disparaging campaign against Obama is just politics as usual – even as reporters note that the campaign is tailored to reach white voters, including white red state Democrats. Southern white Democrats have particularly turned on the party under Obama: In 2012 Obama lost 40 percent of the white vote Al Gore won in the South 12 years earlier.

It’s also beyond a doubt that Democrats were running on a platform of winding down the Iraq war and fixing the increasingly broken, pro-rich Bush economy, as the housing bubble was just starting to burst. Unlike the 2014 GOP, they campaigned on actual policies. It’s one thing to run against Bush’s war, and another to run against Obama’s America.

There’s another big difference: Republicans who fled the embrace of their unpopular president in 2006 weren’t hampered by any perceived need to balance criticism of Bush with efforts to keep favor with his most loyal supporters, as red-state Democrats are when it comes to black voters and Obama. It was a painful irony when the New York Times announced Kentucky is one state where Democrats’ hopes may hinge on black voter turnout, just as Mitch McConnell opponent Alison Lundergan Grimes was working overtime to avoid saying whether she voted for our first black president.

Lovers of false equivalence will say that Democrats work hard to turn out black voters, so why complain that the GOP is concentrating on whites? There’s really no comparison between the two strategies. Democrats rely on the fact that black voters overwhelmingly support the policies they promote, while Republicans still rely on white fear, if not white racism, as they promote a generalized Obama-phobia rather than specific counter-policies. Large majorities of Republicans back an increase in the minimum wage and paid family leave, policies that are mostly supported by Democrats. A slight majority of Republicans even say they trust the federal government to handle the Ebola challenge – only Tea Party and rural voters say they don’t.

And Democrats haven’t written off white voters, not even in the South. That’s what’s behind the sometimes craven efforts of red state Democrats to distance themselves from our first black president – with said president’s blessing, however ambivalent he may be.

There are also policy implications for the country in the racial balkanization of the two parties. House Republicans don’t have to get a single Latino vote, and they will still keep their majority, given the way districts have been carved up to concentrate white voting power and dilute that of so-called minorities. So even though the Senate mustered a tough, bipartisan agreement on comprehensive immigration reform, House Speaker John Boehner can block it indefinitely without worrying about his hold on power.

Democrats, meanwhile, are trying to serve the interests not only of Latino voters but of fearful whites in red states, too – which is why the president decided to put off an executive order deferring some deportations until after the election. That’s led to some calls for Latinos to boycott Democratic candidates, which could also hurt the party in November. There’s some evidence that the continuing sluggishness of the economy for low and middle income folks might also dampen turnout. The enthusiasm gap in this election – only 9 percent of likely 2014 voters say they’re “enthusiastic” about Obama -- stems in part from voters’ disappointment that he hasn’t been able to enact his promised agenda.

So one party struggles to represent the emerging American majority, while the other ignores or even suppresses it. Your ability to motivate your base is compromised when you're still trying to appeal to a demographic cross-section of the country – and that’s a disadvantage right now only for Democrats.

It’s the overlay of voter suppression that makes the GOP’s reliance on an anti-Obama strategy particularly disturbing. There are lots of differences between America’s two electorates, but one thing is clear: Only one electorate, that of the GOP, works to suppress the votes of the other electorate.

That’s why for the foreseeable future, we have gridlock: The larger, diverse electorate chooses the president, very likely a Democrat. Then the smaller, older, wealthier white electorate elects Republicans to Congress and state houses in the midterms, to thwart that president, to deny the policy agenda backed by the larger presidential electorate, and also to restrict its ability to vote. That’s a dismal feedback loop of dysfunction, and there’s little reason to expect it to change any time soon.