Can Lena Dunham save snark?

The sardonic tone once so fresh to TV has become ubiquitous and unbearable. The "Girls" star may be its last hope 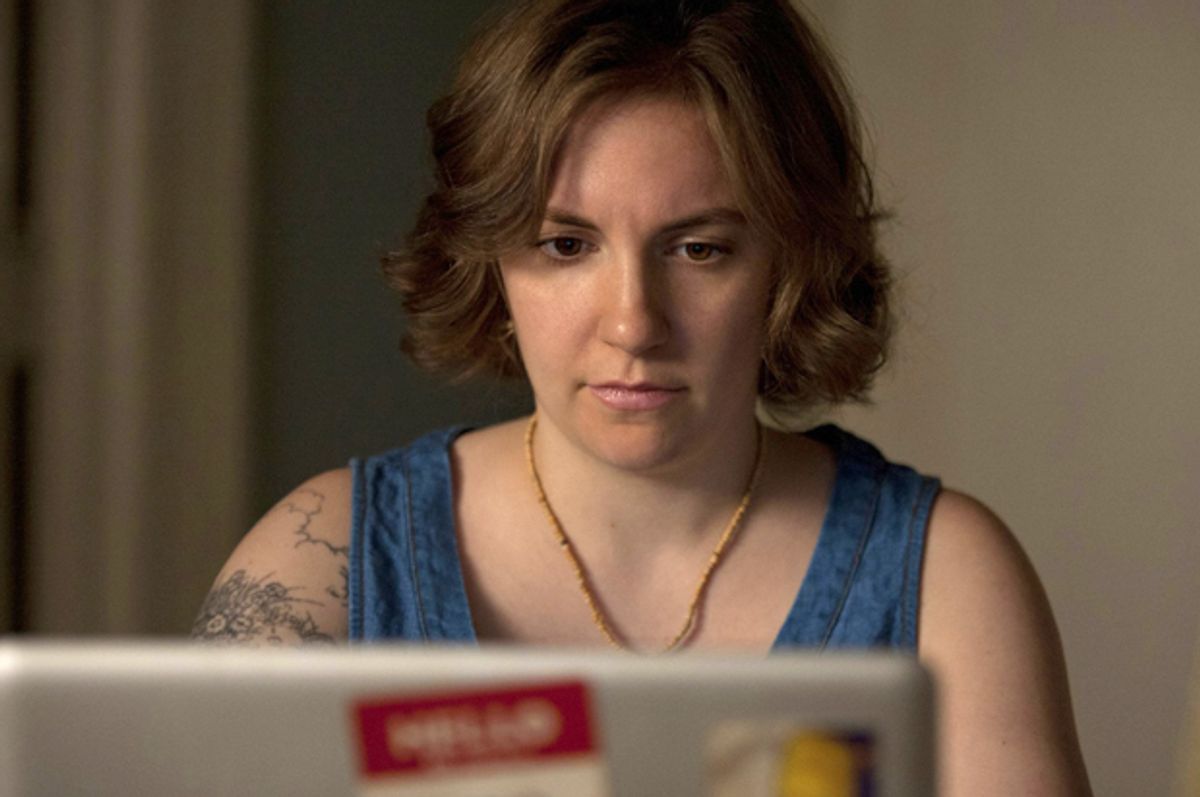 Where do you go in comedy when the “snarky tone” that was once so fresh in TV and film becomes the go-to fodder for mainstream American advertising executives? When all the actors in the commercials resemble some version of a “hipster,” wryly delivering their lines with unmasked sarcasm, with expressionless faces (save the imperceptible hint of an eye roll), and with arms decidedly hanging straight down and never moving? When comedy gets to that point, what is one to do? Where do you go when “fresh” becomes “overdone”?

You cut it open and watch it bleed.

There have been different styles of television comedy over the years, the major players being the Slapstick (think I Love Lucy), the “Intelligent,” and the Snark. Comedy styles usually enjoy long-term success, so when there’s a shift from one tone to another, it is often difficult to discourage everyone in comedy from using it. And overusing it.

I’m not going to send you too far back; let’s just go to the 1980s. TV comedy of this era was generally of what I call the “Intelligent” type. These shows were not concerned with the standard “set-up/joke” pattern of sitcoms, where the punch lines could be delivered by anyone in the room, regardless of their character “type.” These shows instead relied upon long-tail character development and on the viewers’ understanding of these characters and of how they felt in any given situation. On these shows, “Judy” may deliver the joke’s set-up and when the camera cuts to “Bob,” the audience is so familiar with what he must be thinking that they burst into laughter long before he’s audibly responded. The Cosby Show, Family Ties (full-disclosure, I was….), and Cheers used this form of comedy—relied on it. This style continued on and this live-before-an-audience, multicamera comedic fare ruled the tube for some time.

And then in 1989, Seinfeld came along and essentially capped the era with a comedic tone with which few TV audiences were familiar: snark. The out-the-corner-of-the-mouth, sometimes purely observational, comedy. It’s generally devoid of actual engagement with the reality of the situation. It doesn’t care about you. It was fresh at the time and it was funny. Previously, the closest comedy TV had gotten to snark was late-night talk-show hosts like Dave Letterman and sarcastic teenage characters. Every TV teenager, from Beaver Cleaver’s big brother, Wally, to Roseanne’s kids, especially middle daughter, Darlene, had had their measure of angst-ridden, eye-rolling, “Oh my God, I can’t believe I’m related to you” soft-ball snark toward their parents, but it was always shot down like a drone at a Kings hockey victory party. Seinfeld, on the other hand, went ahead and filled an entire basket with it.

Though the show was hugely successful, the “full snark” didn’t take hold of comedy completely until the arrival of Arrested Development, which pulled all the snark from Seinfeld and fed it Miracle-Gro. They then poured it vigorously down our throats. By the time we had caught our breath, this tone had infected all of comedy.

Enter Danny McBride and his HBO show, Eastbound and Down. McBride had the solution. Cut it open. Cut human behavior, human experience, human nature wide open and make you look at it. So, as you watch this train wreck of to-the-bone comedy, you’re laughing because it’s funny, yes, but also because it hurts so much. You’re looking at your species. You’re looking at you.

And then came Lena Dunham. Until Dunham came along, there was no “female answer” for the snark exit question. She entered the television-comedy arena (not incidentally, also on HBO) with knife in hand and full-vertical cuts on all limbs. But, while McBride allows us to see the evisceration of Kenny Power’s rash, boisterous, braggadocio persona, Dunham splits open, instead, a newly graduated college student in Girls, with her alter ego Hannah Horvath, a young woman. A person who has yet to establish financial freedom from her parents. A woman not sure what she’s doing. THIS she splits open and lets bleed. Fucking ballsy.

More from DAME: "She Could Have Been Diane Sawyer"

What had been missing from comedy for so long is what makes dramatic TV and film so compelling to us: consequences. If you screw over your best friend in real-life, you’re going to answer for that, often times in many ways. In dramatic TV or film, we often see this reflected. In comedy, though, a character conflict or resentment may last only long as it serves the joke within the episode, and then is lost. Forever.

TV comedy producers understand that their shows will perform very well in syndication because this genre can, almost always, be watched comfortably out of order and in one-episode spurts. The syndication life of a comedy show, wherein all the episodes are rerun on your local stations, is not then conducive to characters’ long-held resentments, complex issues, and unfinished business between characters. It’s not the comedy producers’ fault; it’s just TV economics.

Dunham’s work on Girls, on the other hand, is full of consequences: When Jessa gets too “friendly” with the father of the kids she watches, the wife notices, calls her on it, and eventually fires her. It isn’t something glossed over. Jessa feels the fall-out. We get it.

When Marnie throws off her overly attentive boyfriend, Charlie, an almost 3-season through-line then tracks how hard it is to ever get “relationship Humpty-Dumpty” back together again. We get it.

When Shoshanna chokes down her disappointment and rage at hearing she won’t be graduating this semester and then unleashes it in her apartment, we know it’s because she knew it was going to be easier to clean up her apartment than to clean up a public scene at her school’s information desk. We get it.

When Hannah has a drawn-out sexual weekend with a doctor she doesn’t know and eventually leaves with a “What just happened? I guess I should go now” posture, we know that that probably won’t ever get resolved for her. We get it.

More from DAME: "Is There a Trick to Making Halloween a Treat?"

These and other scenes resonate with us, because we’ve been there in one form or another. And there were consequences in our situations as well. When similar consequences are not shown in a TV show or film, it’s human nature for us to pull back emotionally from the show, because we know it’s dishonest. We may still enjoy watching the show, but we don’t care emotionally anymore. We just can’t.

And so, we watch Lena’s character, Hannah, like one would watch a pinball, dripping with blood, bang up against the bumpers of her life, leaving red trails of experiences that may or may not be unconsciously repeated later. We watch the stillness of her and the other actors’ reactions to situations they cannot control, situations they did or did not bring upon themselves, situations they can’t possibly fully understand.

And I don’t think Dunham, herself, is being attacked by “sexist critics and viewers” over her nudity, or by just-about-everyone-with-a-blog about her supposed navel-gazing, or by “fashion critics” for her awards shows’ outfits. I think she’s being attacked because she is sticking the comedic knife into herself in every film, every “Girls” episode, every article and book she writes, and what it reveals so resembles the truth about our own human experiences that it enrages those of us who don’t want to look. It enrages.

Most of what Dunham is doing is not “doing it right.” Her characters have consequences, she plays a lack of shame about showing a not-size-2-body on camera, and she slouches in her red carpet gowns with a look on her face that asks, “Are you really watching this silliness?” Dunham really blows it for you if you were clutching to a tidy idea about how humans are represented in the media. She blows it all to Hell. And it’s about time.

There’s a thickness to this kind of human representation in filmed comedy.

And I can’t wait to see how much deeper Lena Dunham can cut.